Values vs. Interests: How Should America Deal with Bad Guys? 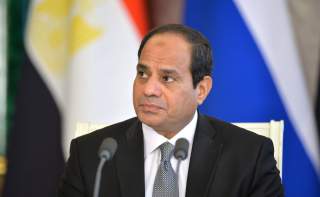 President Trump’s decision to extend an invitation to Philippine strongman President Rodrigo Duterte is only the latest and perhaps the extreme example of the Trump administration’s seeming determination to demonstrate that American values are not U.S. interests too.

The decision to strike Syria in the wake of the Assad regime’s use of chemical weapons against civilians and the successful effort to free an Egyptian-American human rights activist notwithstanding, the pattern of the new administration for embracing authoritarian leaders like Egypt’s President Sisi and Turkey’s Erdogan is all too clear. The administration seems to have defined the essence of foreign-policy realism: interests before values and order before freedom.

And yet while the Trump administration seems to have taken this notion to a new level, the relationship between values and interests has always been an uneasy one in the execution of U.S. foreign policy.

On one hand, the United States promotes its values and respect for human rights, good governance, transparency, accountability and so on; yet on the other, Washington consistently partners with authoritarian leaders who brutally repress, jail and deny their citizens rights, but whose cooperation is deemed essential in important security areas.

In a wonderfully compelling turn of phrase, Sen. John McCain maintains that “our values are our interests” and we must not be shy, embarrassed or weak in promoting this equation.

But is the values-equals-interests equation serviceable and sustainable in conducting an effective foreign policy in the cruel world beyond America’s shores? Not easily, and sometimes not at all. And here’s why.

The world isn’t composed of a series of similar cookie-cutter challenges to which similar remedies and standards equally apply. The United States intervened to promote political reform in Egypt during the Arab Spring, but refrained for good reason from pushing it aggressively in Saudi Arabia or Bahrain. We invaded and occupied Iraq, presumably to topple an evil dictator and destroy WMD stockpiles. Should we have done the same in Libya, Syria or Yemen? We engaged with some of the worst anti-American insurgent and terror groups in Iraq for reasons of battlefield exigencies, yet rightly choose to avoid talking to Hamas or Hezbollah largely for political reasons. The United States needs flexibility and discretion in foreign policy, not a straitjacket of moral or ethical principles to dictate our policies, however ennobling they may be.

Unless we intend to promote and protect our core interests unilaterally—and we cannot possibly—we need to cooperate with unsavory regional partners. And there are precious few out there, certainly in the Middle East, who don’t have terrible records on human rights. Even before the recent referendum (and President Trump’s congratulatory call), Turkey’s Erdoğan had imprisoned thousands, banning journalists and firing judges, teachers, and members of the military suspected of opposing him. And yet as a NATO member, and a partner in the fight against ISIS, Washington has given Erdoğan a pass.

Meanwhile, Saudi Arabia’s intelligence and security services imprison Shia, its war against the Houthis in Yemen (assisted by the United States) kills thousands of innocent civilians, and its clerics spout and spread jihadist propaganda close to the Salafi-jihadi line. Still, because of oil and cooperation against the jihadis, the United States refrains from serious criticism of the Saudis—and is even ramping up its support in Yemen. In the case of Egypt, where President el-Sisi’s repression has led to the imprisonment of thousands, the Trump administration has deemed Egypt too important to make its human-rights abuses a major issue.

Our Leverage Is Limited

If the United States wanted to, could it force other nations to improve their human-rights practices and become more democratic and open societies? Probably not.The challenge is that when you deal with authoritarian leaders who perceive their very survival and existence is at stake, they will fight, maneuver and resist in order to avoid change. Deny Egypt weapons or funding, and it will get them from the Russians, Europeans, or Saudis. These authoritarians have a much greater investment in maintaining the status quo than we do in changing it. The reason Assad and Iran are winning in Syria is that they are prepared to sacrifice and die to maintain influence and power there. Are we? We also tend to infantilize the Arabs by assuming that America, whether it’s a freedom agenda or some high-minded notion of better governance, has the fixes to what ails the broken angry and dysfunctional Arab world. If we can’t fix our own house—and recent events here should give us pause about preaching or lecturing to others—how are we going to advise Middle Easterners in repairing their own?

Look in the Mirror

The politically incorrect reality is that more often than not, American interests cannot be made to coincide with our values. In fact U.S. interests, values and policies are constantly at odds with one another. The definition of foreign-policy realism is putting interests before values and order before freedom. Having worked for half a dozen secretaries of state for nearly twenty-five years, I’m not sure we want that to be America’s mantra.

Still, we need to face up to our own record in the matter.

In the face of mass killing and slaughter, the U.S. record on humanitarian intervention and putting moral and human-rights issues at the top of our agenda has been pretty poor—from the Armenian genocide to the Nazi Holocaust, to Cambodia, Darfur, Rwanda and the Congo. Bosnia and Kosovo are the exceptions. Indeed, what President Obama didn’t do in Syria, and what Trump is still reluctant to do now—massive intervention—has been the norm, not the exception, throughout decades of U.S. foreign policy.

Let’s promote our values. Illuminate them to the rest of the world when we can. But as we formulate our foreign policy, let’s at least be honest with ourselves about how much we really care about them.

Aaron David Miller is a vice president and Distinguished Fellow at the Woodrow Wilson International Center for Scholars and author of The End of Greatness: Why America Can't Have (and Doesn't Want) Another Great President. Miller was a Middle East negotiator in Democratic and Republican administrations.