Venezuela: The Protesters' Power Is Rising 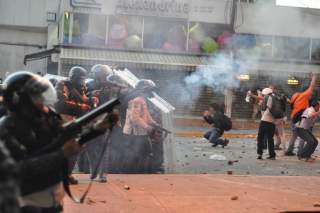 The economic damage and cruelty that the Venezuelan people have suffered (first, under the late President Hugo Chavez, and more recently, under the regime of Nicolás Maduro, who succeeded Chavez in 2013) is palpable. One only needs to strike up a conversation at one of the student coffeehouses or visit the offices of Cedice, the thirty-year-old free-market think tank that has refused to bend or bow to the regime, to realize that the government has failed to extinguish the flame of liberty.

Yet, dozens of students are in jail and more than a thousand have been indicted. Reports of torture are common. The government has tried to co-opt them, intimidate them and even lure them into a farcical “dialogue.” But they have stood their ground.

As Juan Requesens, leader of the youth revolution, told me on my recent visit to the Bolivarian Republic, these students—who have known no other government than the cult of Chavez, “chavismo”—have no intention of giving up. “We will not sit down until they free political prisoners and stop all manner of torture.” They will continue their fight until true democracy under the rule of law is restored.

Similar courage is found elsewhere. Leopoldo López, one of the high-profile leaders of the resistance movement, was jailed several months ago for joining María Corina Machado, a congresswoman who was beaten up and stripped of her office, and Caracas Mayor Antonio Ledezma in seeking a “way out” from the dictatorship through civil disobedience.

Diosdado Cabello, the head of the National Assembly—a corrupt thug and former military officer—made a couple of surprise visits to López’s parents in the middle of the night to pressure them into persuading him to go into exile. I’m told that Cabello even offered to “negotiate” political asylum for López with the U.S. government—a bizarre offer since the Venezuelan government has blamed López for killings that Maduro’s paramilitary forces are reported to have carried out.  López’s parents and his wife, Lilian (a hero in her own right), refuse to sell him out. “He did nothing wrong,” she told me, “and he will not leave his country. No matter what they do to him in jail.”

Despite the regime’s continuing strong-arm tactics, civil society has been blossoming. Experts on constitutional law are volunteering through the human-rights organization Foro Penal Venezolano to represent indicted students and opposition leaders.

In some “barrios,” people cook for young protesters, despite the fact that they have little themselves. In middle-class neighborhoods, families hide young Venezuelans for whom the government has arrest warrants. And journalists continue to do their best to tell the truth, despite government efforts to suffocate their newspapers by denying them foreign exchange with which to import newsprint.

Maduro has tried to divide his foes by opening a dialogue with part of the Mesa de la Unidad Democrática, the opposition umbrella group, including Henrique Capriles, the Governor of Miranda, who barely lost to Maduro in a rigged election last year.

All that said, a consensus has emerged among opponents that a variety of tactics need to be pursued simultaneously. A dialogue with no street pressure and civil disobedience will lead nowhere, they understand. But eventually, when the government is forced to negotiate a way out, such dialogue will become inevitable if a bloodbath is to be avoided.

Every serious poll confirms, for the first time, that a solid majority of the public opposes the government. Even pro-“chavista” polling companies, such as Instituto Venezolano de Análisis de Datos, agree: In its most recent survey, 55 percent of Venezuelans considered Maduro a dictator. Key opposition figures are all more popular than Maduro, including Machado and López—who is now even ahead of Capriles.

There is still work to do. Not only does “chavismo” command significant support in the barrios, where Chavez-style populism continues to have great appeal, it is sustained by a repressive police state designed (and in some cases led) by Cuba, complete with paramilitary forces that have massacred students in the streets and a military that has been systematically purged of potential dissidents.

It’s hard to know just how long it will take for Venezuelans to rid themselves of this fifteen-year tyranny. But the process has begun. The government is desperately on the defensive and the opposition has finally reached critical mass. The economy is in free fall, with inflation at more than 60 percent, GDP growth at zero and acute shortages affecting nineteen basic products. As a result, whatever faith the people of the barrios had in the Chavez mystique is quickly eroding.

These are the hallmarks of a “fin de siècle” in Venezuela.