Venezuela Is Turning into Libya 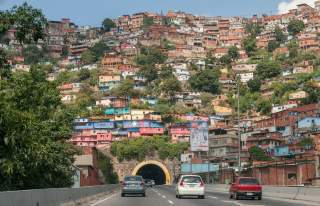 Although the government of President Nicolás Maduro remains in power, Venezuela is slowly slipping out of control. The economy is in free-fall, inflation is heading over one thousand percent and basic staples are not available. Additionally, the political landscape is highly polarized, with pro-government militias or armed bands squaring off against growing groups of anti-government demonstrators. Over twenty-five people have been killed in clashes over the last two weeks. And conditions are going to get worse.

Slowly but surely, Venezuela is turning into Libya, a badly fragmented territory filled with men with guns and unable to compromise. This is not the way it has to be. However, the easy access to weapons in Venezuela, the erosion of law and order, and the failing power of the political center, offer up the possibility that chaos is not far away.

The problem is that Maduro and his leftist cohorts hold power, but have horribly mismanaged the economy and done much to shut down democratic government. Between Maduro and his mentor, Hugo Chávez, Venezuela has gone from being one of Latin America’s wealthiest countries to one of its poorest. Billions of dollars in oil revenues have disappeared, much of the private sector has been driven into bankruptcy, foreign businesses have seen the government take over their assets (General Motors being the latest along these lines), and inept—but politically loyal—cadres have been appointed to manage parts of the economy to which they have no or little knowledge. This is painfully obvious in the operating of the state-owned oil company, PDVSA, which increasingly cannot meet its commitments for exports, even for favored Chinese and Russian customers.

Corruption has permeated the government, reaching into the presidential and vice presidential families, both of which have members fingered by U.S. authorities for narcotics trafficking. On top of that, Caracas has the dubious distinction of being one of the most dangerous cities in the world. According to the Venezuelan Violence Observatory (Observatorio Venezolano de Violencia, or OVV), an estimated 28,479 “violent deaths” occurred in Venezuela during 2016, a homicide rate of 91.8 per one thousand residents. In the United States, the murder rate is less than five per one hundred thousand residents. OVV notes that makes Venezuela the second most violent nation in the world outside of open war, only behind El Salvador.

The latest round of political instability came from the government’s recent effort to have the Supreme Court void the powers of the legislative body, which is controlled by opposition parties. The country's attorney general, a regime loyalist, refused to go along with this, forcing President Maduro to backtrack. However, years of economic mismanagement, the arrest and imprisonment of many opposition leaders, and the government’s thug-like behavior resulted in emboldening angry citizens into the streets.

The defining issue hanging over Venezuela is probably one in which the armed forces reach a threshold as to how much violence they will allow; let the regime collapse in a massive societal upheaval along the lines of civil war or push Maduro out and replace him with the more energetic and ruthless Vice President Tareck El Aissami and hope that they can ride out the storm. Relinquishing power to an interim government and setting new elections under international guidance would probably be the best idea, but it is hard to see vested interests within the government, including the military, surrender their means of making money (many activities of which are no doubt illicit or should be done by the private sector).

Venezuela is heading toward civil war as parts of the regime has deep leftist ideological views that cannot remain in power in a more open and democratic political system nor will they tolerate any outcome that allows popular will determine how rules. Armed loyalists of the regime have much to lose if people are given a vote that could result in change.

What happens in Venezuela will not be contained within its borders. The corruption and drug trade have long seeped out of the country, penetrating the Caribbean and hitting markets in North America and Europe. There are increasing stories of armed gangs hitting up the Dutch tourist islands of Aruba, Bonaire and Curacao, moving in and out of Venezuela.

As Venezuela lurches into failed statehood, it becomes an even greater risk for Colombia, Guyana and southern Caribbean states that may soon be facing refugees, more criminal gangs (running out of a lawless Venezuela) and possibly military tensions (this would be more leveled against Colombia and Guyana). This story is only going to get worse. It is time for Venezuela’s neighbors to increase pressure on the Maduro government to resign in favor of an internationally approved interim process, backed by the Organization for American States or the United Nations. Short of that Venezuela increasingly runs the risk of becoming the Caribbean’s and Latin America’s Libya—a lawless state, filled with armed groups seeking to claim control of the oil industry. The magic socialist realism of the Maduro government is hitting the hard concrete of failed promises and angry citizens. Time for something different.