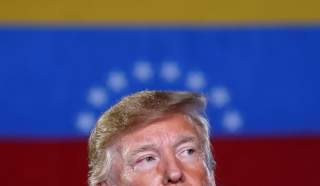 Venezuelans are starving, and they need our help.

The borders are shut down, civilians are getting injured by the dozens, and humanitarian aid is going up in flames—all while Venezuelan president Nicolás Maduro grows more dangerous than ever. As hunger in Venezuela reaches new heights, the U.S.-backed opposition to Maduro gains support and the dictator’s anger continues to build. This is a recipe for disaster.

President Donald Trump views Venezuela’s current disorder as a political opportunity to push back against his leftist opponents with a real-life example of socialism’s failures. But while Trump gives vague warnings over large-scale intervention and contemplates his foreign-policy moves, Venezuela is collapsing. The United States has a moral obligation to do something—and fast.

Americans have long supported humanitarian aid efforts. When Americans see the socialist menace destroying Venezuela, hopes of helping those who are suffering from hunger haven’t faded. Compared to other strategies for aid, most Americans prefer foreign assistance in the form of sending food and necessary medical supplies. Americans, too, have historically liked foreign influence to be undergirded by altruism rather than self-interest.

In an ideal world, the United States would also make itself more readily accessible as a safe harbor for Venezuelan refugees seeking freedom. About 10 percent of the Venezuelan population has fled the country since 2015, and most have attempted leaving on foot. Unfortunately, even with this dire situation, the United States has yet to make an exception to grant more Venezuelans refugee status.

As things stand in the United States, fear of socialist tyranny alone is not enough to win an individual asylum. In the last four years, about seventy thousand Venezuelans have sought asylum, far more asylum seekers than from any other country. More strikingly, in 2015, 237,000 nonimmigrant visas were granted to Venezuelans, but in 2018 only 28,540 were issued—a massive decline.

Even with a drop of nearly 88 percent, Trump will probably not speed up either the asylum or nonimmigrant visa process. Given his unwillingness to compromise on his border wall plan, it is unlikely that Trump would suddenly exhibit an open mind to letting in outsiders unless it is out of strategic advantage for his political aims.

Venezuelans have gone hungry—so hungry, in fact, that the average Venezuelan lost twenty-four pounds over the last year, even as Maduro and his loyalists dined on steak dinners. More worrisome are reports that as many as eight in ten Venezuelan children are currently suffering from malnutrition.

Maduro is well aware his people are starving. In fact, he labeled elongated starvation as a good thing, since a lack of nutrition “makes you tough.” Yet he doesn’t seem to be starving himself in solidarity.

Instead of just claiming to be the epitome of freedom and liberty, Americans should act on these fundamental values. Trump has a unique opportunity to not only highlight the woes of socialism, but also the power of democracy to mobilize millions with concern for each other’s ability to live a liberated lifestyle.

Americans must not shrug their shoulders as people die at the hands of unstable dictators desperately holding on to power. If the United States cannot agree to let in refugees, then at the very least it needs to focus energy on finding a weakness in Maduro’s haphazard blockade and send more food aid to Venezuela. If not, then an increasing number of children will go to bed not knowing when their next meal will be. In the face of such tragedy, doing nothing just isn’t an option.

Natalie Dowzicky (@Nat_Dowzicky) is a Young Voices contributor and a researcher at a D.C.-based think tank.