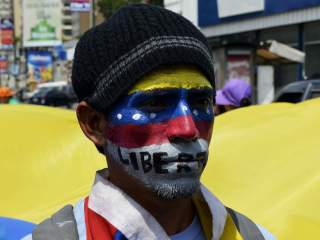 VENEZUELA IS a failing state. Despite having the world’s largest proven hydrocarbon reserves, the nation is bankrupt. Basic consumer goods are scarce or unavailable. Purchasing power is falling fast as a result of the world’s highest inflation rate. The healthcare system is in a state of collapse. Infrastructure is in disrepair. Common crime is out of control as the social order begins to break down. The U.S. alleges leading government figures to be engaged in narcotics trafficking and money laundering.

Welcome to the Bolivarian Revolution.

Since 1999, Venezuela has been an experiment in governance and economics. Eschewing the center-left path of much of the rest of Latin America, Venezuela has pursued a more radical course: to remake society itself. The late Hugo Chávez and his successor Nicolás Maduro have intentionally, if incrementally, turned the nation toward a populist, authoritarian vision vaguely identified as “Chavismo.” Using the levers of democracy and the legitimacy bestowed by elections, Venezuela’s government has systematically brought its institutions under executive influence or outright control. Elections themselves have been skewed to provide every advantage to government-supported candidates. Meanwhile, democratically elected opposition leaders have been arbitrarily removed from office, stripped of their budget authority or jailed on trumped-up charges—and sometimes all three. From the courts to the security apparatus, the central bank to the national oil company, the education system and the press to the private sector, independent institutions and organizations have been under sustained Chavista assault.

The government has justified its actions as a defensive response to Washington’s supposed imperialistic designs, turning a long-standing friend and economic partner into an enemy, and seeking to convince the Venezuelan population that it is under active threat by “the empire.” When this approach loses credibility, Venezuela attempts to build nationalistic fervor by picking fights with its neighbors Colombia and Guyana, or its former colonizer Spain. Meanwhile, the government has worked diligently to build a cult of personality around Chávez, linking him in the eyes of the public to the liberator Simón Bolívar. At this point in Venezuela, Bolívar has taken on an almost mystical importance; presenting Chávez and Maduro as his heirs imbues the Bolivarian Revolution with legitimacy even beyond the ballot box, giving the government freedom of action they might not otherwise enjoy in their claimed march toward Bolívar’s vision of a united Latin America.

Despite such soft utopianism undergirded by strident anti-Americanism, the government can be pragmatic when it is in its interests. It has proved to be clear-eyed in pursuing its objectives. Most notably, Venezuela continues to be an important supplier of oil to the United States, its most lucrative market. U.S. willingness to pay market prices coupled with a (now receding) commodities supercycle provided significant resources to underwrite efforts to remake Venezuelan society. An almost unlimited spigot of hard currency over the years allowed the regime to build and maintain majority domestic support through both direct and indirect benefits including cash transfers, community-development projects and social programs. Sales of crude to China, India and others at concessional rates provided additional resources to build international support. In particular, billions of dollars in Chinese loans and assistance, to be paid back by future oil deliveries, have allowed Venezuela to temporize as its economy flags. The costs of such actions will be borne by Venezuelan citizens long after the regime has left the scene, having taken all the benefits up front and left only debts to repay. With so much money sloshing around and limited oversight brought on by atrophying institutions, corruption has exploded and a new class of elites, the so-called Bolivarian oligarchs, or “Boligarchs,” has arisen.

Ironically, the government has been able to reduce the attraction of any political alternatives by painting the opposition as dominated by a callous and cynical oligarchy interested only in self-enrichment, unmoved by the poverty of the majority of Venezuelan citizens. This is a powerful and effective storyline in a nation with an abundance of natural resources, yet a grossly unequal income and wealth distribution. Like most effective propaganda efforts, the government has built its narrative on an element of truth. Venezuela suffered from florid and ostentatious corruption with the arrival of the petroleum industry in the early twentieth century. Politics was seen as a means to distribute the spoils of governance among a well-connected elite. There was little concern for the public good or broad-based economic development.

The international development community also supported Chavista efforts that were intended to reduce poverty, no matter how ephemeral their impact. Various actors and Hollywood celebrities added their voices in support of the Bolivarian Revolution, seeming to value an association with Latin American leftist chic more than appreciating the longer-term damage being done in the name of socialism. Meanwhile, a Latin America that has elevated sovereignty to an absolute principle saw no need to urge Caracas to change course, particularly when the economy was robust and cross border business relations were strong and growing.

CHAVEZ’S POPULIST economic policies have proven unsustainable, as the price for Venezuelan crude has collapsed from a high of around $115 per barrel to under $30 per barrel. Yet even as economic gains erode, structural changes that were made to institute populist governance remain. The benefits were fugacious, while the costs are lasting and destructive. Democratic institutions have been bent to the will of the executive, leaning toward authoritarianism the longer the government remains in power. As long as poverty appeared to be decreasing, social justice increasing and the opposition divided, international sympathy allowed the regime to justify its increasing antidemocratic excesses as a legitimate if unfortunate overreaction to years of exploitation by political and economic elites. Even as the regime presented itself under the banner of poverty alleviation and anti-imperialism, however, it moved to consolidate its power, using the veneer of democracy to undermine democracy.

At the same time, Maduro is no Chávez. He lacks the charisma and revolutionary legitimacy of his mentor, despite the strident efforts of the regime and its Cuban advisors to promote him as Chávez’s anointed successor. But facts don’t lie, and Maduro has been unable to justify or explain them away. The International Monetary Fund expects Venezuela’s economy to have contracted by some 10 percent in 2015 and a further 6 percent in 2016. In a futile effort to goose global energy markets, Maduro has taken several recent trips to OPEC capitals and elsewhere in a bid to curtail supply (from the Middle East and Russia), raise demand (in China) or both. To date he has been singularly unsuccessful. He is unlikely to achieve any greater success in 2016, either. Iran is reentering global energy markets, Saudi Arabia continues to value market share over price targets, Mexico is opening further to investors, the shale revolution continues apace, emerging markets are slowing and global environmental actions are achieving greater uptake.

The longer the price of oil lingers at one-third to one-quarter of its previous highs, the faster Venezuela will run out of cash. Production is declining due to a lack of investment, and much future production is already committed to China and elsewhere. Lacking a diversified economy, and having already led a full-scale assault on the activities of the private sector through expropriations, price controls, inefficient regulations, restricted access to hard currency and outright harassment, Venezuela has no obvious engine of new growth. Printing money will only fuel additional inflation. Without oil-backed resources, Venezuela’s economy will continue to deteriorate.

With no positive economic inflection point in sight, Venezuela’s deteriorating condition has caused Maduro’s popularity and that of the Chavista movement to plummet. A waxing share of the Venezuelan populace has grown weary of the model, which has created a new class of corrupt elites, wrecked the economy and made the conduct of daily affairs more difficult for a majority of Venezuelan citizens. Once-improving poverty and social-inclusion indicators have reversed, and are now reportedly worse than when Chávez first came to power in 1999. Other than those in power and their supporters, Venezuelans are not better off than they were seventeen years ago. This has obliterated Chavismo’s ultimate claim to domestic legitimacy.

As the government loses legitimacy in the eyes of its own people, it has had to rely more and more on heavy-handed tactics to maintain control. The Bolivarian Revolution has been revealed at home and abroad as an economically regressive system of authoritarian, caudillo-style governance anathema to the hemispheric values of democracy enshrined in the Inter-American Democratic Charter, which Chávez’s government adopted. As a result, after sixteen years and an unbroken and escalating pattern of behavior, Venezuelans and the international community appear to be less willing to acquiesce further in Chavismo’s antidemocratic excesses.

FOR THIS REASON, the year 2015 may be remembered as the beginning of Chavismo’s end. Despite transparent efforts to forestall elections for the heretofore Chavista-dominated National Assembly until a date more favorable for the regime, Maduro was obliged to hold elections prior to the end of calendar year, as required by the constitution that Chávez himself promulgated. After first refusing to set a date, Maduro eventually chose December 6, to coincide with the anniversary of Chávez’s first election and implicitly remind voters what was at stake.