A Verdict on Iranian Military Nukes Won't Kill the Deal 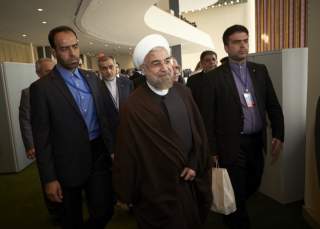 With the International Atomic Energy Agency days away from issuing its “final assessment” regarding the possible military dimensions (PMD) of Iran’s past nuclear activities, this long-running issue will soon come to a head. The outcome will almost surely be messy and inconclusive, not pleasing to any of the parties concerned. It will provide ammunition to American and Iranian opponents of the Iran nuclear deal, which was concluded in July between Iran and the P5+1 group of states. But the resolution—or, more accurately, non-resolution—of the PMD issue, as unsatisfactory as it is likely to be, will not undermine the case for proceeding with the agreement.

The finale of the PMD controversy has been a long time coming. In November 2011, IAEA Director General Yukiya Amano issued a detailed report, based on “overall credible” information from a “wide variety of independent sources” and the Agency’s own investigations, which concluded that, at least until 2003 and possibly beyond, “Iran has carried out activities relevant to the development of a nuclear explosive device.”

In the years following the report, the IAEA actively sought to gain a better understanding of those activities, but its efforts were stymied by Iranian stonewalling and obfuscation. Tehran repeatedly claimed that the evidence on which the IAEA was relying was fabricated and based on forgeries. It denied that Iran was ever interested in nuclear weapons or that it had engaged in nuclear weapons–related research and experimentation.

In July this year, as the P5+1 and Iran were reaching the final stage of negotiations on the nuclear deal, called the Joint Comprehensive Plan of Action (JCPOA), the IAEA and Iran agreed on a “road map” containing the steps Iran would need to take to give the Agency a sufficient basis to prepare a final assessment of the PMD issue which, according to the JCPOA, would be issued by December 15. On October 15, the IAEA announced that the activities required by the road map had been completed by Iran.

What was not widely recognized at the time is that, under the JCPOA, the suspension of sanctions against Iran does not depend on Iran fully and honestly disclosing to the IAEA its past nuclear-related activities. Neither does it depend on the IAEA reaching a definitive conclusion in its December report that previous activities were not weapons-related or that no weapons-related activities were continuing. Instead, the PMD prerequisite for sanctions relief (as distinguished from other JCPOA-mandated prerequisites, such as removal of excess centrifuges and reduction in enriched uranium stocks) is simply that Iran fulfill the formal requirements of the road map—including supplying additional information, holding “technical-expert meetings” with IAEA officials and providing access to some locations.

Now that the IAEA has certified that Iran has met those requirements and that the Agency therefore has a sufficient basis to complete its December PMD report, the PMD-related condition for sanctions relief has already been met, whatever the December report may say or whatever reaction the IAEA Board of Governors may have to the report.

We will learn very shortly what the IAEA report says. But with Iran reportedly having cooperated only minimally under the road map and continuing to deny that it ever engaged in nuclear weapons–related activities, it seems very likely that the report will be inconclusive. The report may state that while the Agency has discovered no evidence of continuing weapons–related activities, it cannot conclude that past activities were not weapons–related. Far from giving Iran a clean bill of health, the report may indicate that the questions and concerns outlined by the IAEA in November 2011 have not been resolved.

An IAEA Board resolution to "close" the PMD issue:

Especially because the report will not clear their name and will leave past questions unanswered, the Iranians will press hard for an IAEA Board resolution that would put the PMD issue behind them once and for all. At their insistence, the JCPOA commits the P5+1 countries to submit a resolution on the PMD issue to the IAEA Board, “with a view to closing the issue.” But Iran and several of the P5+1 states may have very different views of what it means to “close” the issue.

Iran can be expected to aim for a Board resolution that supports its narrative that it never engaged in nuclear weapons–related work—specifically, one that terminates the Agency’s investigation of its past activities, cancels previous Board resolutions on the issue, reduces the prominence of the Iran issue on future Board agendas and perhaps even precludes the reopening of PMD issues in the future.

The United States and its European P5+1 partners will want the Board resolution to reflect that the concerns identified in the IAEA’s November 2011 report have not been allayed. They will oppose any attempt to whitewash Iran’s record, to preclude the reopening of past issues whenever warranted or to exclude unresolved issues from the Agency’s consideration of its so-called “broader conclusion” as to whether Iran’s program is devoted exclusively to peaceful purposes—a judgment the IAEA seeks to make in the case of all parties to the IAEA Additional Protocol.

In an effort to pressure the P5+1 to close the PMD issue in a manner they favor, the Iranians have raised the stakes. In an October 21 letter to President Hassan Rouhani endorsing the JCPOA and providing guidance on implementing it, Supreme Leader Ali Khamenei declared that key Iranian nuclear implementation tasks, including reducing enriched uranium stocks and re-designing the Arak reactor, will only begin after the IAEA has closed the dossier on past and present issues.

But the Iranians are unlikely to continue linking implementation of their nuclear commitments to the closure of the PMD issue, especially to an overreaching definition of closure that would hold them blameless for past activities and prevent unresolved questions from being taken in account in future assessments of the nature of their nuclear program. They know that if they continue to link performance of their nuclear commitments to an unreasonable definition of closure and therefore block agreement on a Board resolution, then “implementation day” and the suspension of sanctions will be delayed. With President Rouhani and his supporters hoping that early sanctions relief will give Iranian moderates a boost in February’s Majles elections, it is unlikely they would risk a stalemate on “closing the file” at the IAEA Board meeting.

In the end, given the importance that all parties attach to successful implementation of the JCPOA, the IAEA’s December Board is likely to reach agreement on a compromise resolution. Such a resolution might formally declare the longstanding IAEA investigation of past activities to be terminated. But at the same time, it could direct the Agency to rigorously monitor the JCPOA’s prohibitions on nuclear weapons–related activities, recognize that past issues can be reopened if new information comes to light and make clear that questions about possible nuclear weapons–related activities, past or present, are relevant to considering the Agency’s “broader conclusion.” Just as previous U.N. Security Council resolutions on Iran were replaced by a new Council resolution, previous IAEA Board resolutions could be replaced by a new resolution that, together with other Board guidance, could ensure that the Agency has a strong mandate and the necessary legal authorities to monitor possible weaponization activities going forward.

Sanctions relief without an Iranian confession:

A few months later, when Iran completes the other steps required for “implementation day,” most U.S., EU and United Nations sanctions will be suspended. This may come as an unpleasant surprise to American observers, many of whom probably assumed that sanctions relief would depend on Iran credibly disclosing its past activities, not simply fulfilling the undemanding, largely procedural requirements of the “road map.” Critics can be expected to attack the JCPOA anew for permitting sanctions to be relieved despite the December IAEA report having concluded that Iran has not made a full accounting of its past nuclear work.

Their reaction is understandable. The U.S. government, several other governments and many IAEA professionals remain convinced—on the basis of highly credible information available to them—that Iran, at least until 2003 and possibly beyond, had a systematic and officially approved program of research, procurement and experimentation aimed at developing nuclear weapons.

When the IAEA released its November 2011 report outlining its PMD concerns in great detail, the Iranians could have opted for a defense along the lines suggested by former Iranian President Akbar Hashemi Rafsanjani in a recent interview that other members of Iran’s elite must have regarded as decidedly off-message. Rafsanjani stated that, during the Iran-Iraq war in the 1980s when Iran’s nuclear program began, Iranian officials were thinking about acquiring a deterrent capability. He is quoted as saying that “we were at war and we sought to have that possibility for the day the enemy might use a nuclear weapon. That was the thinking. But it never became real… Our basic doctrine was always a peaceful nuclear application, but it never left our mind that if one day we should be threatened and it was imperative, we should be able to go down the other path.”