A Very Unhappy Birthday for Somaliland 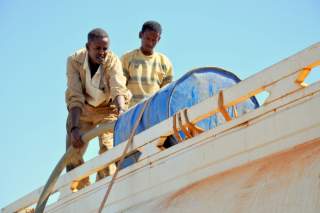 On May 18 of this year, Somaliland turned twenty-five. Yet the anniversary is cause for a bittersweet celebration at best. Peace has improbably reigned since this enclave of the Horn of Africa obtained de facto independence in 1991. During those two and a half decades, the world has forgotten this unlikely outpost of functioning government, which has run free democratic elections since 2003 embedded in the chaos of the failed State of Somalia. As a result, 3.5 million Somalilanders have been raised stateless, victims of a legal asterisk that shuts them off from the world and—by extension—prosperity.

The African Union, based in neighboring Addis Ababa, is reluctant to grant Somaliland recognition. The AU and Ethiopia fear to trigger claims to independence in Africa, but in particular in the Ogaden region, whose independence claims it has long sought to stifle. Ethnic Somalis live in the Ogaden region and an unrecognized Somaliland has the dual benefit of weakening Somalia—Ethiopia’s rival—and Somaliland, whose roads the Abyssinian state uses paying minimal taxes to reach the port of Berbera in the Gulf of Aden.

Yet, if Somaliland is to prolong its precarious peace and stability, it will need some form of legal recognition and an infusion of development aid. Donors should be eager for one of two things: a rare development success story that beats the odds put forward by the United Nations and could serve as a model; or shoring up a place home to two million people between the ages of fifteen and twenty-five that is currently a bastion against terrorism but could morph into a buzzing hive of it. In a region beset by turmoil, Somaliland is one of the few places that repeatedly proves its ability to survive like a stubborn weed growing in the cracked and barren political soil of one of the world’s most failed states.

With virtually no help, Somaliland has earned the label of “emerging democracy” from Freedom House. Their three-party system is inspired by British parliamentarism and is a remarkable success of bottom-up grassroots political mobilization and organization. Together with Kenya, Somaliland is one of the only countries considered at least “partly free” in East and Central Africa. I lived in Hargeisa, the capital of Somaliland, for a year. It’s a blip surrounded by the empty lands of pastoralist herders, but home to bustling cafes and restaurants. Even though Hargeisa is legally isolated from the world, Somaliland cries out to be an open society. Last year, for the May 18 independence celebrations, I attended a banquet at the Ministry of Interior. Renditions of poems and songs complemented traditional dishes whilst politicians assured us that international recognition was, finally, within reach. This year, celebrations were tainted with sorrow due to the ongoing drought in the country, which has wiped out scores of cattle.

The contrast could not have been starker compared to my short stints in Mogadishu, a city shrouded in the smell of gunpowder and an air of hopeless pessimism that can only be produced by decades trapped in a war of attrition. I could walk around Hargeisa, day or night; Westerners would only walk around Mogadishu if they had a death wish or a penchant for being kidnapped. Even for Somalilanders, Mogadishu is considered too dangerous—most have never been. Al Shabaab is still prevalent enough for Mogadishu residents not to pick up the phone if it rings from an unknown number.

Yet, in spite of this contrast of fresh hope versus withering stagnation made worse by the creeping vine of homegrown terrorism, international development efforts typically treat both countries as a single forsaken wasteland and lack of recognition means the United Nations are not legally allowed to dispense aid directly to Somaliland. Meanwhile, the stubborn refusal to legally recognize Somaliland and to treat it as a regional problem creates an unbreakable ceiling of potential. Even with good governance and admirable tenacity, a country can only get so far going it alone in a bad neighborhood. Between Somalia and Somaliland, only one country has border controls, a cohesive army, functioning security services, and a government enjoying some level of popular legitimacy—and it’s the one that isn’t legally recognized.

I saw this paradoxical reality daily. Abdifattah, a taxi driver in his mid-twenties who speaks perfect English, keeps his car registration easily accessible as he faces routine license and registration checks in Hargeisa; in Mogadishu vehicles do not even have license plates. Abdifattah’s life not only illustrates the genuine State capacity of Somaliland, it also embodies its stunted future. Abdifattah drifts across the streets of Hargeisa carried by the lyrics of 50 Cent and Stromae in his Toyota imported from the United Arab Emirates. A forgotten child of the era of globalization, he has matured into an adult within a society that the world has deliberately cast aside: the Somaliland passport is recognized in just eight countries and the odds of being granted a visa are dismally low.

Even within its own region, Somaliland cannot control larger forces at play. Ethiopia and Kenya attempt to play puppet master to Somalia, pulling strings to their advantage and capitalizing on the lawlessness for their own foreign policy goals. Kenya has a claim on some of Somalia’s untapped offshore oil resources, whilst Ethiopia supports Somaliland to a point because it sells huge amounts of khat (a mild narcotic) and accesses the Indian Ocean from Somaliland—Ethiopia is a landlocked nation still unofficially quarreling with Eritrea. This regional puppetry creates even starker divides within Somalia, further limiting Somaliland’s potential. Gulf States are also taking advantage of Somaliland’s frays to push forward their own cultural agenda—not one of tolerance and openness.

As these outside forces continue to deny Somaliland its potential, Abdifattah and his friends could morph from a being a missed opportunity into a threat. The median age in Somalia is 17 in urban areas and 16 in rural areas. For comparison, the median age in the United States is 38 and in France it is 41. This is a population dominated by youth, but because of the broader context of stagnation and isolation, 75 percent of young people are unemployed. This isn’t just a development tragedy; it’s also a serious security risk.

Many Al Shabaab recruits in Somalia join for economic opportunity and, some say, the hope to receive an education in Yemen or one of the Gulf States. The terrorist group is said to lure young uneducated Somalis by advertising education and monthly salaries of $200 to potential recruits (GDP per capita was $347 in Somaliland in 2012 and $543 in Somalia in 2014, so that is a tantalizing sum). In the fifth poorest country in the world, drone strikes are going to be like a game of whack-a-mole against an ever-increasing pool of prospective recruits if young people are faced with no legitimate alternatives.

For those that resist the temptation to partake in the economy of terror, illegal migration offers an alternative. An estimated 44 percent of unemployed youth in Somaliland stated their intention to migrate, according to an International Organization for Migration (IOM) survey, seeking opportunity elsewhere since they can find none at home—23 percent of those who hold bachelor’s degree concur. On April 21, five hundred migrants—mainly from Somalia, Eritrea, and Sudan—found watery graves in the Mediterranean like thousands before them. As Europe moves to shore up its borders and diffuse terrorist threats from abroad, a struggling Somaliland hurts both efforts: twenty-one thousand Somalis applied for asylum in Europe in 2015 and many more will seek to emulate them.

Somaliland’s government cannot fix the problem alone. Its annual budget is just $251 million, a pathetic figure. There is no industry, only limited services and crumbling infrastructure. A lack of strategic interests in Somaliland has resulted in apathetic foreign policies from most western governments; it is viewed as problem for Somalia to handle, and so development money flows through Mogadishu—the dysfunctional chaos—rather than Hargeisa—the improbably tranquil desert. A regional player—Dubaï Ports World—has very recently stepped in to sign a $442 million deal with Somaliland on May 9 to rehabilitate the Port of Berbera, but Western governments would be well advised to step in too. In this fully Muslim nation, a splash of political realism and economic diplomacy could go a long way.

The solution is threefold. First, Somaliland has been a self-sufficient country since 1991 and it is long past overdue to recognize that fact legally. Give them a fighting chance by allowing them to participate in the global economy, attract foreign direct investment, and begin developing new sectors. Second, provide a short-term injection of foreign money into the economy—priming the pump so to speak. Third, build the capacity of educational institutions in Somaliland and carve opportunity for its youth to study and work beyond the dusty desert. These three simple policy changes could spur Somaliland to become an authentic success story.

All of this has been achieved swimming against regional currents, but demography is a time bomb whose clock has been ticking for a quarter of a century in Somaliland. The United States should stand up for a promising sub-Saharan country, reverse the tide of disillusion, and unlock opportunity. For the inclusion of Somaliland into the court of nations would be no gesture of goodwill, but a pragmatic decision based on the realization of the security risks associated with not recognizing the Stateless Republic.