Veterans Are Not Honored by Forever War 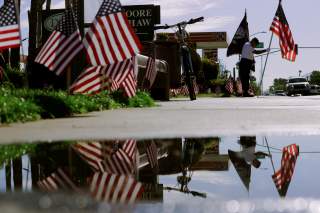 I have really mixed feelings today. On Veteran’s Day, we’re supposed to be honoring “veterans, military families, and those who gave their lives in service to this great Nation. We are indebted to these heroes for the freedoms we enjoy every day.” My discomfort arises from the fact that while Washington honors veterans and service members with words every day, government actions all too frequently produce the opposite effect.

After the “war to end all wars” (World War I), Congress enacted a proclamation to honor the veterans who had fought and died in what had been the most destructive war in history up to that point. In roughly only six months of fighting (May-November 1918), American troops suffered 204,002 wounded in battle and 116,516 killed from all causes; an average of 1,780 casualties per day of fighting before the Armistice took effect on November 11, 1918.

A 1926 congressional act somberly suggested to all Americans that as a result of the profound human suffering wrought by the war, “this date should be commemorated with thanksgiving and prayer and exercises designed to perpetuate peace through goodwill and mutual understanding between nations.” In 1954, President Dwight D. Eisenhower—himself having witnessed even greater levels of carnage during World War II—likewise focused on the sacrifice paid by our military members and the search for peace.

“Let us solemnly remember the sacrifices of all those who fought so valiantly, on the seas, in the air, and on foreign shores, to preserve our heritage of freedom, and let us reconsecrate ourselves,” he emphasized, “to the task of promoting an enduring peace so that their efforts shall not have been in vain.”

Upon assuming office in 1953, Eisenhower proved with actions he valued the sacrifice of American service members, by immediately ending the Korean War and then went to great lengths to keep the United States out of others during his eight years in the Oval Office. He keenly recognized the cost to America and our troops that war imposes and wisely used other means to secure America and ensure our prosperity as a nation.

Such recognition by American leaders seems to have vanished, especially since 9/11. Instead of honoring service members and preserving their lives by keeping war as a last resort, government leaders and the popular media almost turn them into a caricature onto which we lavish considerable praise. While that might seem a good and noble thing, it masks the humanity and individual value of the individual—and lessens our understanding of the cost to them and their families for the perpetual combat deployments we keep sending them on.

I have friends who themselves saw considerable combat after 9/11 and, while not physically wounded, they have to live with the pain of having lost several of their friends to combat deaths. Moreover, since they left the service, they have had to deal with the even more cruel pain of losing fellow combat vets to suicide. Another of the underappreciated costs of our wars is the surviving family members.

It is difficult to comprehend the amount of pain inflicted and the number of people affected by the death of one service member. Every man or woman who dies often leaves behind a mom, dad, brothers, sisters, aunts, uncles, cousins, nieces, nephews, and close friends. Most of America never sees their pain. It is hidden from their sight and rarely does any outside of military communities consider it. These survivors—who themselves make profound sacrifices for our country—typically suffer extreme pain in anonymity.

If the security of the country is at stake, if the future of our Republic is threatened, then the sacrifice of the troops and the pain suffered by the surviving family members would be at least more tolerable. Everyone who wears the uniform expressly understands they may one day be required to lay their lives down in defense of the country they love. Few do it with trepidation; most consider it an honor.

But we do neither our service members nor their families any favors by ignoring the price they pay as we heap praise on them, lauding them all as being "heroes." The use of lethal military power—and the associated risk to our service members—should only be used by our leaders when the security of the United States is directly threatened or attacked.

The precious lives of the men and women who wear the uniform should not be risked by conducting missions intended on “sending a message,” posturing for some future potential clash, or for the security of some other country. We should not sacrifice our citizens for the security of Baghdad, Kabul, or to favor one band of rebels over another in civil wars across the globe.

If we truly want to honor our veterans and their families, we should insist that our leaders hearken back to the original intent of Veteran’s Day and once again “reconsecrate ourselves to the task of promoting an enduring peace” and do our best to “perpetuate peace through goodwill and mutual understanding between nations.”

Daniel L. Davis is a senior fellow for Defense Priorities and a former lieutenant colonel in the U.S. Army who retired in 2015 after twenty-one years, including four combat deployments. Follow him @DanielLDavis1. The views in this article are those of the author alone and do not represent any organization.