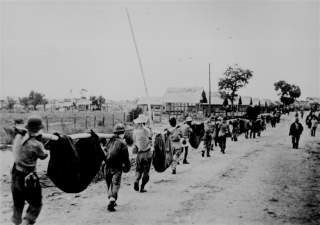 For seventy years I dealt with my PTSD by looking forward, or as I say, “for the next carabao.” This is how I learned to survive the Bataan Death March and over three years of brutal captivity on the Philippines and Japan. It is a lesson I like to share.

After the surrender of Bataan to the Japanese in April 1942, 70,000 American and Filipino troops began a sixty-five-mile forced march up the Bataan Peninsula. We walked in the tropical heat with no food, little water and rare relief. I bear a shoulder wound from a botched beheading.

From time to time, we passed carabao, the water buffalo that is the national animal of the Philippines, trying to keep cool in swamps and rice paddies. I knew that once I saw one carabao, there would be another one up the road. If I could just make it to the next carabao and then the next, I would make it to the end.

I made it through the March and through the ordeals of the next three-and-a-half years. But we surviving POWs are still looking for the last carabao.

Seven years ago, on Veterans Day 2008, I found the next one. I had just completed laying the American Defenders of Bataan and Corregidor’s last memorial wreath at the Tomb of the Unknowns in Arlington National Cemetery. As I started to leave, my cell phone rang. It was Japan’s ambassador to the United States, Ichiro Fujisaki. He asked to see me.

For decades, I had harbored anger and resentment toward both the Japanese who tortured me and the American government that refused me justice. The Army prohibited me from talking about the horrors I endured, and the 1951 San Francisco Peace Treaty barred me from seeking redress for my slave labor. Multimillion-dollar lobbying campaigns by Japan and a White House intent on protecting its Japanese ally stymied all Congressional efforts to help the POWs.

It is hard to explain my excitement at the call. Never before had any Japanese official been willing to meet with a former POW. My wife and I took a taxi directly from the cemetery to the ambassador’s residence.

Ambassador Fujisaki met us at the door. In an extraordinary gesture, Mrs. Fujisaki met us with a bow and extended both her hands. She then led us on a tour of her home. She stayed with her husband to listen. A Washington “Japan hand” told me not to smile. That was advice I ignored.

I was not there to negotiate. I was there to tell my story, to share the pain of the Death March, the Hellship and the Mitsui coal mine; to describe the torture, mistreatment and starvation; and to explain why 40 percent of the nearly 28,000 Americans who were POWs of Japan did not return home. I wanted to know why the Japanese government did not include Americans in their $14 million-plus outreach programs for hundreds of British, Australian and Dutch former POWs and their families.

Ambassador Fujisaki listened. He heard that, even for decades after the war, we American POWs had been denied our dignity and humanity. But Red Cross boxes could not be delivered or medicines administered to the dead. Japan could not undo its lobbying campaign or retrieve the $12 million it had paid to Washington lobbyists. But he wanted to know how we could move beyond this and forward together to reach the next “carabao.”

To me, it was simple: an official government apology for all the POWs. For the survivors, a chance to participate in Japan’s POW visitation program. And for all the POWs who slaved at the mines, docks and factories of over sixty well-known corporations, apologies from those companies to restore a measure of dignity.

For the first time, I had been heard.

In April 2009, my friend Ambassador Fujisaki accepted my invitation to repeat this apology before my fellow POWs at the American Defenders of Bataan and Corregidor’s last convention in San Antonio, Texas. Not all were ready to let go of their anger, but everyone admired his courage.

That fall, the new Obama administration built on this progress. With the Japanese government, they established a program for former POWs to visit Japan and their former POW camps. I led the first group of seven in September 2010, where we received an apology directly from the foreign minister. The seventh delegation will travel to Japan next month.

My last carabao is elusive. It is an apology from the Mitsui Corporation for forcing me into a dangerous coal mine and allowing their employees to beat me. Baron Mitsui often motored into my camp to examine his Western charges in the primitive, if not primal, confines of his facility. Today, this mine is an UNESCO World Industrial Heritage site. There is no mention of the mine’s history of slave labor.

I hope I can still make it to this last one. On this Veterans Day, my friend Congressman Mike Honda from California has arranged for me to have breakfast at the White House. He wants me to tell the President about my carabao and to not forget World War II vets like me.

Dr. Lester Tenney was a member of the 192nd Tank Battalion on Bataan, The Philippines.The 192nd was deployed to the Philippines on October 27 and arrived on November 20, 1941. Tenney was part of American defensive efforts to hold the islands, but he was taken captive on April 9, 1942. As Japanese prisoners, he took part in the infamous Bataan Death March. Liberated in September of 1945, Tenney went to the University of Southern California where he received his BA, MA and PhD. He became a professor of finance and insurance at Arizona State University. After he retired as a professor emeritus, Tenney wrote his memoir My Hitch in Hell, about his experiences as a POW under the Japanese.