Vietnam Is in Danger, But America Can Help 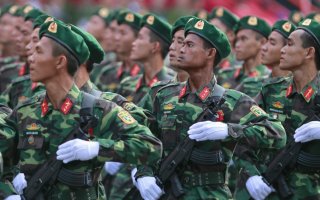 The Russian invasion of Ukraine offers a stark reminder of what sometimes awaits minor powers neighboring revisionist great powers. Russia’s invasion in late February 2022 shocked the world, but it only occurred after years of military and political preparation laid the groundwork for a major operation. Since 2014, Moscow reoriented a significant part of its army to face Ukraine, militarized Crimea, armed the Donetsk and Lugansk separatists, and built-up political influence in Belarus to allow basing troops there. China appears to be following a similar playbook in Southeast Asia and is steadily increasing its military options toward its main local rival, Vietnam.

In 1978, Vietnam invaded Cambodia partly for fear of China’s sway over the Democratic Kampuchea regime. Although the Vietnamese-led regime change was a success, Cambodia slowly drifted back towards China’s embrace over the next few decades. Phnom Penh’s enduring fear of Vietnamese hegemony over the former Indochina offers a fertile ground for Chinese penetration. China’s growing presence in Cambodia and its effort to reinforce the country’s armed forces now endanger Vietnam. Although Beijing probably also aims to strengthen Cambodia’s hand in its enduring border dispute with Thailand, a U.S. treaty ally, it is hard not to see Chinese interest in the country as primarily driven by anti-Vietnamese motives.

Cambodia maintains a sizeable but decrepit military of around 125,000 troops that has been buttressed by significant Chinese donations and sales of military equipment. Over the years, China provided Cambodia with dozens of Type-59, Type-62, and Type-63 tanks, Tiger armored vehicles, artillery, multiple rocket launchers, MANPADS, Y-12 transport aircraft, Z-9 transport helicopters, and a Type-067 landing craft, among others. China also provided Cambodia with conventional warfare capabilities typical of interstate conflicts, not internal security operations. Alone, Phnom Penh lacks the means to push deep into Vietnam, but limited thrusts across the border could distract the Vietnamese from a Chinese attack. Even without direct involvement, simply mobilizing its military close to the border would force Hanoi to earmark forces for defending there.

Furthermore, Chinese military assistance helps finance the training of Cambodia’s military. Cambodian soldiers have established training ties with their Chinese peers and increasingly exercise together. Ongoing construction works at Ream Naval Base suggest it could soon host Chinese ships. Chinese investments help sustain Cambodia’s economy and cement the Cambodians’ sympathy. Hence, it appears unlikely that Phnom Penh could resist a Chinese request for basing troops in the country in case of a Vietnamese contingency.

Nevertheless, Cambodia is unlikely to be a major staging ground for a Chinese invasion due to the uncertain role of Laos. If Beijing cannot use the Lao land link, troops and supplies will require shipping from Chinese ports, which would mechanically limit the scale and sustainability of any Chinese deployment in Cambodia. Although China’s influence over Laos is also rising, the latter’s leaders in Vientiane remain warier of Chinese embrace than their southern neighbor. Laos maintains close political and military relations with Vietnam and mainly relies on Russia for equipping its armed forces. The Boten-Vientiane railway (which was completed in 2021 and runs from the Lao capital to Boten on the Chinese border) would greatly facilitate Chinese movements during a Vietnamese contingency, but this is unlikely to materialize unless China builds up a dominant political influence over Laos or coerces it into submission.

Therefore, a Chinese invasion force would still have to depart overwhelmingly from the Sino-Vietnamese border. However, even a few Chinese units deployed in Cambodia would pin down significant Vietnamese combat power and give Chinese aircraft and missiles closer bases to strike southern Vietnam than if they were departing from Chinese territory. Indeed, the elongated shape of Vietnam’s territory deprives it of strategic depth and renders it vulnerable to attacks coming from the west. Ho Chi Minh City, the largest city in Vietnam, is only around 50 kilometers away from the Cambodian border.

Two outcomes usually follow when a great power like China acquires an overwhelming military advantage over a weaker neighbor like Vietnam. In the first outcome, said neighbor sees the writing on the wall, throws in the towel, and starts bandwagoning with the threatening great power. The U.S. defensive line in the Indo-Pacific would likely survive the loss of Vietnam, but the addition of a country of nearly 100 million people and its potent military to China’s side would seriously alter the balance of power in Washington’s disfavor. Beijing also would gain clear-cut domination over the South China Sea. More worryingly, with Vietnam supporting China and Cambodia, Thailand would become the new center of Beijing’s attention and face an overwhelming coalition. Indeed, Chinese hegemony over Indochina, combined with its growing embrace of Myanmar’s coup government, could threaten Thailand from both sides and render it indefensible.

The other outcome is war. The great power invades its weaker neighbor in the hope of a swift victory. As Ukraine’s fate shows, war is a tempting option for an aspiring regional hegemon that believes an easy victory is possible. China may not come out unscathed from such a war and would inherit a weakened Vietnam, but the result would likely still be a great Chinese leap toward hegemony in Southeast Asia. At worst, Beijing may fail to overrun all of Vietnam, but the onslaught would likely have wrecked Hanoi’s economy, infrastructure, and military, thus turning it into a weaker prey the next time around. As it stands, the Chinese leadership has probably no plan to invade Vietnam. But ambitions grow alongside capabilities, and the next spat over a South China Sea island or an anti-Chinese protest in Vietnam could elicit Beijing to solve the Vietnamese problem once and for all.

In that light, the United States should help Vietnam avoid its strategic nightmare of a China-Cambodia-Laos coalition. Vietnam may have a fighting chance against a Chinese attack coming solely from the north on a rugged terrain that favors the defense. The Vietnamese would be able to mass most of their combat power there and achieve favorable force ratios. Even if the Vietnamese are unable to repeat their stunning 1979 victory, China’s march southward could turn into a slow and painful attrition campaign for Beijing. Ukraine’s fierce resistance against Russia reminds us that great powers do not automatically triumph over lesser states. However, if China can attack from its territory, Cambodia, and Laos, Hanoi would need to disperse its forces all over its territory and have a harder time meeting the onslaught.

The most urgent for Washington is to counteract Chinese influence in Laos. If Laos can remain out of China’s tow, Beijing will remain unable to amass enough combat power to invade Vietnam from the west. A first easy step is to offer American training to Lao soldiers. Providing state-of-the-art weaponry to Laos is risky due to Vientiane’s proximity to Beijing and Moscow. However, donating or selling old or discarded American equipment could help dissuade the Lao from turning to China. In addition, despite the current nadir in American-Russian relations, Washington would be wise to turn a blind eye to Russian influence in Laos for now, as attempts at expelling the Russians would increase Laos’ reliance on the Chinese. The United States could also offer economic carrots such as preferential trade relations.

Keeping Laos out of Beijing’s grasp would prevent the worst-case scenario of a China-Cambodia-Laos coalition. However, even a small Chinese force in Cambodia, combined with the Cambodian army itself, would suffice to immobilize significant Vietnamese forces to cover their western border. Therefore, the United States should offer breathing space to Phnom Penh to loosen China’s grip. An important cause of Cambodia’s reliance on China is American hostility toward the current regime.

Washington’s assumed hostility toward the Lukashenko regime in Belarus left Minsk with no option other than throwing in its lot with Moscow. The Kremlin could then use Belarus as a springboard for its thrust toward Kyiv. Hence, the United States’ democracy-promotion diplomacy directly facilitated Russia’s onslaught on Ukraine. Washington must not repeat this blunder in Southeast Asia and, thus, should refrain from publicly denouncing the Phnom Penh regime. However, it could privately express to Cambodian leaders that too close a relationship with Beijing could result in American efforts to destabilize the regime. Although weapon sales are out of the question for now due to the China connection, Washington could offer security guarantees and economic carrots if Cambodia takes steps to limit Chinese influence.

Dylan Motin is a visiting research fellow at the Institute for Far Eastern Studies of Kyungnam University and a doctoral candidate majoring in political science at Kangwon National University.