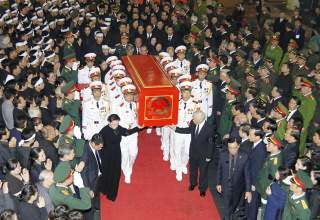 Kim Nga’s nightmare began earlier this month when she received a mysterious message from her husband’s phone saying police had arrested him in Ho Chi Minh City, Vietnam. Her husband, Ngo Van Dung, a blogger and journalist, is a member of a Vietnamese pro-democracy movement that has publicly called upon Vietnam’s government to allow freedom of the press and free access to information.

Article twenty-five of the nation’s constitution protects these civil liberties, but the Reporters Without Borders’ Press Freedom Index ranks Vietnam 175 out of 180 countries. Amnesty International and Human Rights Watch have denounced Vietnam’s arrest and imprisonment of bloggers who have criticized the government, such as Nguyen Van Hoa, who was convicted of spreading anti-state propaganda and sentenced to seven years in prison for reporting on a chemical spill along Vietnam’s central coast in 2017. Earlier that year, a court sentenced blogger Nguyen Ngoc Nhu Quynh, also known as Mother Mushroom, to ten years in prison for writing about the impact of the spill on fish. Paul Robertson of Human Rights Watch’s Asia division criticized the verdict as an example of the Vietnamese government’s “paranoid desire to maintain political control” taking precedent over “justice and human rights.”

Observers of contemporary Vietnamese politics are speculating that human-rights violations and the suppression of dissent will mark the legacy of President Tran Dai Quang, who died on September 21 at the age of sixty-one from an undisclosed illness, according to state media. Quang assumed the presidency in 2016, and prior to that, he had led the Ministry of Public Security, which includes Vietnam’s secret police and intelligence agency. According to the BBC, Quang was a “loyal and committed communist party member and known for his hard-line approach to dissent. Scores of dissidents have been jailed under his leadership.” A New York Times report on Quang’s death declared that the president “presided over a crackdown on free speech.” In January, Human Rights Watch reported that as many as 119 dissidents were serving prison sentences for speaking out against the Vietnamese government, joining banned political organizations, or otherwise appearing to threaten the primacy of Vietnam’s communist party.

Quang may have presided over the most recent crackdowns on dissent, but Vietnam’s authoritarianism is a legacy of Hanoi’s victory in the Vietnam War. Not long after the war ended on April 30, 1975, news of re-education camps, executions, seizures of property, and other human-rights violations gradually made its way out of Vietnam. On May 30, 1979, Joan Baez and eighty other signers wrote an “Open Letter to the Socialist Republic of Vietnam,” which the New York Times, Washington Post, Los Angeles Times, and other newspapers published as a full-page ad. The letter expressed concerns about re-education camps, the disappearances of alleged enemies of the state, and the forcing of average citizens to clear minefields without proper training or equipment. Disappointed, the letter noted that “with tragic irony, the cruelty, violence, and oppression practiced by foreign powers in your country for more than a century continue today under the present regime.” From the perspective of those who had opposed U.S. intervention in South Vietnam to support an unpopular, oppressive government, hearing of the Socialist Republic of Vietnam’s human-rights abuses made it seem as though Vietnam had simply traded one undemocratic government for another.

Political repression continued into the late 1980s and early 1990s when Vietnamese activists saw an opportunity to petition for democratic reforms as the government experimented with economic restructuring. Known as doi moi, the economic reforms made room in the state-controlled economy for some private enterprise. In 1990, police arrested two alleged dissidents who had activist credentials dating back to the Vietnam War. Father Chan Tin, a Catholic priest in Saigon and an opponent of continued U.S. intervention in Vietnam, had publicized testimonies from political prisoners regarding the use of torture in South Vietnam’s prisons. After the war, Tin was appointed co-chair of the Central Committee of the Fatherland Front, a state-run umbrella organization of social movements. But he was arrested in 1990 for preaching a sermon on the subject of repentance, which communist party officials interpreted as a critique of the government’s human-rights and religious-freedom record.

Huynh Tan Mam, a former Saigon student leader who had been an undercover agent for the National Liberation Front, was placed under house arrest for writing a letter to Nguyen Van Linh, general secretary of the communist party and a supporter of the doi moi reforms, calling for an expansion of democracy. Neither Mam nor Tin was brought to trial, but authorities ruled that they had violated article 82 of the criminal code, which forbade the dissemination of “anti-socialist propaganda.” Tin was also guilty of defying article 81, which prohibited actions or speech that caused “divisions between the religious and non-religious and separating religious followers from the people’s government and social organizations.” From house arrest, Tin wrote to friends that he “always struggled for the people under the old regime, and it was always on their behalf that I asked the State and the Party to repent their ways.” Loyalty to a government or political party had never been Tin’s reason for speaking out against injustice, and the suppression of civil liberties that turned South Vietnamese against the Saigon government did not end on April 30, 1975, when Hanoi’s military captured the southern capital.

Some analysts argue that President Donald Trump’s withdrawal of the United States from the Trans-Pacific Partnership (TPP) trade agreement, emboldened the Vietnamese government to move more harshly against internal dissent. Barack Obama, during his presidency, tried to use U.S. membership in the TPP to put pressure on Vietnam to improve its human-rights record. This line of thinking is not a stretch; Trump has not inspired the better angels of our nature. Yet the Vietnamese government’s suppression of citizens’ liberties dates back to well before Quang’s presidency.

Tyranny is a defining characteristic of Vietnam’s communist party and the very reason the party has controlled the country for more than forty years. The arrest of Kim Nga’s husband and the imprisonment and disappearances of other bloggers and activists in recent years represents not a new wave of crackdowns under one particularly harsh president but the status quo relationship between citizens and their government in Vietnam since the communist party took power in the 1970s.

Heather Marie Stur, Ph.D., is the Gen. Buford Blount Professor of Military History at the University of Southern Mississippi. She is the author of Beyond Combat: Women and Gender in the Vietnam War Era and co-editor of Integrating the U.S. Military: Race, Gender, and Sexual Orientation Since World War II. Her most recent book, Saigon at War: South Vietnam and the Global Sixties, is forthcoming from Cambridge University Press.