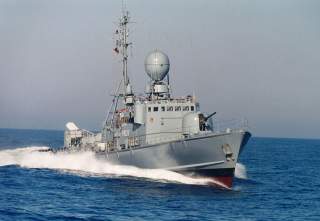 In 1287, Gen. Omar Khan of the Yuan Dynasty led a sizeable invasion force, including numerous war junks, against Dai Viet (present day Vietnam). With battle-hardened Mongols forming the vanguard, it seemed as if the campaign would be a walkover for China. But a naval battle the following year proved otherwise. In the estuary of the Bach Dang River near Ha Long Bay, Dai Viet general Tran Hung Dao repeated the feat accomplished by the earlier, celebrated general Ngo Quyen against the Southern Han Chinese invaders, back in the year 938.

Following Ngo’s approach, Tran planted iron-tipped stakes in the river’s northern distributaries—Chanh, Kenh and Rut—and waited until high tide to lure the Mongol fleet into the shallow waters. When the tide turned, those Mongol war junks were impaled upon those stakes. The much smaller Dai Viet war canoes then swarmed around the trapped Mongol fleet and their crews hurled “mud oil” grenades—little ceramic bottles filled with naphtha and sealed with betel-nut husk, which also acted as a fuse when lit—at the immobile war junks, setting them and their hapless crews ablaze. The Battle of Bach Dang saw grievous losses to the Yuan invasion fleet.

But unlike the battle in 938, which contributed to the end of the first Chinese domination over Dai Viet, the naval victory in 1288 did not alter the bilateral relationship—the Tran Dynasty accepted Yuan suzerainty until the latter’s demise.

The two naval battles at Bach Dang, and contemporary examples in the French Indochina Wars and the Vietnam War, as well as the brief but bloody Sino-Vietnamese border war in the late 1970s, highlighted Vietnamese ingenuity in conducting asymmetric warfare against a stronger foe. Yet the Battle of Bach Dang constituted a rare example of how the Vietnamese could pull off what were essentially land-based tactics in the maritime realm. Also of note is the fact that the naval battles at Bach Dang were fought in shallow waters close to the Vietnamese shores, instead of the open waters of the South China Sea, where Mongol war junks could optimize their combat performance.

No wonder, then, that in March 1988 the Vietnamese suffered a defeat at Chinese hands during a clash in the open waters of the disputed Spratly Islands. The Chinese navy proved more than a match for the Vietnamese, unaccustomed to fighting naval battles in the open waters, who found themselves outnumbered and outgunned. That battle was an attempt to stop the Chinese from encroaching upon what Hanoi claimed as sovereign territory in the Spratlys, and with the Vietnamese forces extended so far from the Vietnamese coast and shorn of quick and substantial reinforcements, the outcome of that battle was quick and decisive. Retaking those features, forcibly snatched from Vietnamese hands following the naval skirmish, was out of the question for Hanoi’s political and military leaders.

The Vietnamese were cognizant of their naval limitations. There was no way they could repeat their ancestors’ feat at Bach Dang against the Chinese. Hence, it has been taken for granted—almost by conventional wisdom—that in view of the gaping and still growing naval asymmetry between the Chinese and Vietnamese, Hanoi must adhere to a sea-denial strategy. Essentially, sea denial envisages denying or disrupting the adversary’s access to maritime areas of interest, while denying the one practicing this strategy free use of the same space. Wu Shang-su, for instance, has argued that Vietnam, standing little chance against Chinese military aggression, has no choice but to adopt a sea denial strategy. Furthermore, he added, a sea-denial strategy fits well within the broader ambit of Hanoi’s post–Cold War policy, emphasizing such principles as independence, non-alliance and defensive defense.

There is also a fiscal imperative, given that Vietnam continues to prioritize its socioeconomic development set in motion under the “Doi Moi” (Renovation) reforms, under way since the early 1990s (also a time that saw a downsizing in the manpower of the People’s Army of Vietnam). “The state budget is still limited while we have to invest in many significant areas such as transport infrastructure, resources for socio-economic development, welfare for the people who served the country well, healthcare and education,” said then defense minister Gen. Phung Quang Thanh in December 2014, who added, “so investment in defense should be taken gradually and be suited to our capabilities. We have two parallel tasks: protecting and building the country. We do not underestimate any of them but if we focus too many resources on defense, we will lack investment in development. Because of a lack of investment in development, we will lack future resources for investment in defense.”

Yet it would be misleading to view the Vietnamese as fatalistic. They have long recognized the limits of a traditional sea-denial approach, and thus have sought to enhance their strategy to forestall Chinese military aggression in the South China Sea.

As Hanoi’s navy has just received its final Russian-built Kilo-class diesel-electric submarine, and is on the cusp of operationalizing a complete submarine squadron within 2017, the image of a sea-denial-centered Vietnamese naval strategy is still in place. While it is true that a submarine, especially a conventionally powered one, is commonly associated with sea denial, it is necessary to look beyond this attribute in the Vietnamese case. All six boats are not only equipped for sea denial in the traditional sense—torpedoes and mines, for example—but they also possess Russian-made Klub-S sea-launched land-attack cruise missiles (SLCM) that can hit targets as far away as three hundred kilometers—well within the Missile Technology Control Regime, which places restrictions on exports of certain offensive missile systems to non-signatory states.

Long-time Vietnam military watcher Carlyle Thayer has opined that Vietnam’s SLCMs would be employed against Chinese ports and airfields, such as the Sanya naval base on Hainan Island, rather than cities arrayed along the southern Chinese mainland coast. This counterforce role would still fit well within Hanoi’s strategically defensive deterrent strategy, but acquiring such an offensive capability would certainly depart from a sea-denial approach. There is no way the Vietnamese can hope to forestall Chinese aggression without the means to raise the costs for Beijing—the potential destruction wreaked upon its forward-deployed naval forces in Sanya being one such instance.

If anything, Russia’s feat during its campaign in Syria in late 2015 demonstrated that it is feasible for small naval forces to conduct limited, expeditionary force projection. The Kilo boat Rostov-on-Don became the first conventionally powered submarine to launch SLCMs in deep, inland penetration strikes. However, the Russians could manage this by leveraging on their extensive command, control, communications, computers, intelligence, surveillance and reconnaissance (C4ISR) capabilities, such as GLONASS satellite navigation, to allow the missiles to fly smoothly over wide swathes of the Middle Eastern land mass. The Vietnamese has a fledgling C4ISR program, focusing on unmanned aerial vehicles and remote-sensing microsatellites. Its current satellite-based targeting capability relies on commercially obtained satellite imagery—far from useful to carry out inland strikes.

Nonetheless, this shortfall would not hamper Vietnam’s counterforce ability against coastal targets. Without the strategic depth and naturally formed terrestrial features to shield it, China’s Sanya naval base is exposed to overwater missile strikes, which do not require C4ISR targeting capabilities like those for deep penetration attacks. And Hanoi is only keen to enhance the ability to punish Beijing and raise the costs of its aggression, beyond those submarines it has acquired. Referring to the Kilos, back in September 2014 a military official in Hanoi remarked that “they are not our sole weapon, but part of a number of weapons we are developing to better protect our sovereignty.”

So, to that end, Vietnam has made further moves to put into effect a more robust counter-intervention strategy that signals a departure from a traditional sea-denial approach. For example, its marines have trained for “island recapture” in the Spratlys—unthinkable back in 1988. In May 2016, Vietnam was reportedly negotiating with Russia the purchase of a third pair of Gepard 3.9–class light guided-missile frigates. What is so special about this purchase is that Hanoi wants these new ships to be armed with the Klub SLCMs. One recalls that the Russian Navy’s Caspian Flotilla corvettes—in the same size category as the Gepard 3.9s—along with the submarine Rostov-on-Don had proven that small surface warships are capable of launching SLCM attacks. Hanoi apparently caught on, and became inspired by Moscow’s feat.

The Vietnamese may not be oblivious to the fact that, like the battle of Bach Dang in 1288, any foreseeable war in the South China Sea with Beijing would result in a preordained strategic victory for the latter. But Hanoi has gradually shifted away from a traditional sea-denial strategy to one that would raise the cost of Chinese aggression. The completion of its submarine squadron in 2017 is just the first major step towards this direction. Vietnam’s modern-day versions of war canoes and “mud oil” incendiary antiship weapons now carries a wholly new significance.

Koh Swee Lean Collin is research fellow at the S. Rajaratnam School of International Studies, based in Singapore. He specializes in research on Southeast Asian naval affairs. He would like to thank Robert Haddick, Visiting Research Fellow at the Mitchell Institute for Aerospace Studies, for his comments and suggestions.