Virtue vs. Virtue Signaling: How Hungary Views the War in Ukraine 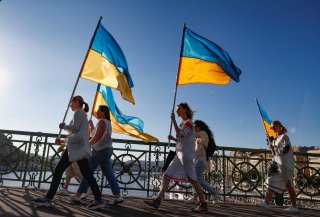 Walking around Budapest, one of the European capitals closest to the war in Ukraine, one quickly notices that there are no Ukrainian flags hanging everywhere. It is not because people are getting used to the idea of war—from the outset of the war there have never really been abundant blue-yellow decorations in the windows of Budapest. Hungarians do not use Ukrainian national colors as some kind of seasonal ornaments of the virtue-signaling symbol du jour. But the ongoing refugee crisis mobilized an unprecedented coming together of Hungarian civil society actors across the political spectrum on a scale unseen since the fall of Communism in 1989.

After an exhausting week-long journey, Marina, a mother of two elementary school-aged children, arrived in Budapest on March 1 via Romania, leaving her husband of fourteen years behind in Kharkiv. Carrying only two suitcases with some winter clothes, she said there was no time to think about packing toys, photos, or food. The local community in Budapest funded her children’s education in an English-speaking private school, provided accommodation and even a job for the mother of two. Tanja, a single mom also from Kharkiv, arrived on March 13; she left with her nine-year-old son hoping to find a safe haven. They found more than shelter: people in their host neighborhood raised money to start their life and offered a furnished apartment for free. Their stories are snapshots of Hungarian solidarity and the outpouring of support from everyday Hungarians wanting to help their neighbors

Since the start of the invasion, more than 1.2 million Ukrainian citizens and legal residents crossed into Hungary from Ukraine and Romania. Since Hungary has no border controls with Slovakia, Austria, and Slovenia, it is difficult to say how many Ukrainian refugees decided to move on to other European countries, but it seems that a large number of them did. Although only 24,452 claims were submitted to the Hungarian authorities for temporary protection by June 13, it was estimated that approximately 100,000 to 140,000 Ukrainian refugees were staying in the country around May 5. Since the war became more localized to the eastern part of Ukraine people have started to return home. According to the European Border and Coast Guard Agency, approximately 2.5 million Ukrainians have returned to their home country since the start of the invasion.

More than one hundred days into the war, Hungarian dedication to supporting Ukrainian refugees doesn’t seem to be waning. Despite the economic and financial hardship Hungary is currently experiencing, caused mostly by the coronavirus downturn and the war, the government is holding steady on the extra benefits provided for Ukrainian refugees. That’s not the case everywhere. The narrative that governments are caring for refugees more than they do for their own citizens has been gaining traction in the region. Recently, Bulgaria started evicting Ukrainian refugees from seaside hotels where they have been staying since the start of the war; they are now supposed to be relocating to refugee centers. Recently, Ukrainians fleeing to Bulgaria have been complaining about the oftentimes complete lack of information. Regarding the eviction of refugees from seaside hotels, Bulgarian tourism minister Hristo Prodanov noted that “we have accommodated and cared for them for three months. Now they must enter the labor market, find housing, pay rent, and live like everyone else.”

At the same time, several leading politicians from opposition parties in Central and Eastern Europe started peddling anti-Ukrainian refugee sentiments. In traditionally anti-Russian Poland, the far-right Confederation Liberty and Independence party has been bashing the government for giving too many benefits to Ukrainian refugees. In Czechia, the far-right Freedom and Direct Democracy party in a recent statement called on the government to “end ‘aid tourism’ for Ukrainian migrants.” In Slovakia, public disapproval of aid for Ukrainian refugees has been on the rise, with smaller protests popping up countrywide. According to Euractiv, some bus drivers even did not allow refugees to board for free despite the fact that they were required to do so by government decree. In Hungary—apart from an initial ethnic slur regarding Roma from Ukraine—not even the far-right Our Homeland Movement voiced official opposition to the help given to Ukrainian refugees.

Regardless of shifting attitudes, countries that have received the most refugees still stand with fleeing Ukrainians. According to a Eurobarometer survey, 86 percent of Hungarians fully or tend to approve of welcoming refugees fleeing the war in the EU. Although this number is lower than the one recorded in Poland (92 percent), it significantly surpasses the figures measured in the Czech Republic and Slovakia (77 percent in both countries).

All in all, Ukrainian refugees met helping people upon their arrival in the EU and haven’t spent a day in a shelter without food, proper care, and a kind word. Hungary is no different. A kind heart is not a matter of catchy slogans or easy displays. In Hungary, there’s no grandiose blue and yellow flag-waving, but there’s unwavering support for their Ukrainian neighbors fleeing from Vladimir Putin’s aggression.

Mónika Palotai is a Visiting Research Fellow at Hudson Institute specializing in the European Union and International Law.

Kristóf György Veres is the Andrassy National Security Fellow at Center for Immigration Studies specializing in EU and U.S. immigration.