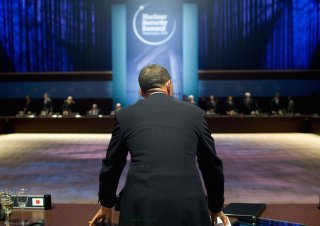 As President Obama prepares to become the first sitting U.S. president to visit Hiroshima, the site of the world’s first nuclear attack, I have begun to reflect on my own experience with these appropriately labeled Weapons of Mass Destruction.

When I was a naval flight officer on active duty in the 1960s, assigned to a patrol squadron, our crew practiced loading a dummy nuclear weapon on our aircraft several times a year so that we would know what to do if we ever had to load a real one. However, I could never find out under what circumstances we would load a real one, what would be our target or even where the nuclear weapons were.

I was amazed by how nonchalant everyone, including me, seemed to be about the issue, even though we had also gone through the Cuban Missile Crisis in 1962, two months after I came into the Navy. Thus, when our squadron deployed to Japan in late 1964, I decided to visit Hiroshima to view the damage that a single nuclear weapon could actually cause to a population and a community. After my visit, I was no longer nonchalant about the power of a nuclear weapon; this was reinforced when I visited Nagasaki a year later.

Two decades later, when I had the privilege of serving in the Reagan administration, I was moved by how concerned President Reagan was about the dangers of an accidental or real nuclear war, even going so far as to propose eliminating all U.S and Russian nuclear weapons—something harshly criticized by the nuclear priesthood.

Today, I am glad that President Obama is going to visit Hiroshima, and about many of the things the president has said about the dangers that nuclear weapons pose to the world. Visiting places like Hiroshima (and Nagasaki) cannot but help reinforce his convictions about the dangers of nuclear weapons, and why the U.S, the only nation to ever have used them, should take the lead in reducing the risk of even more powerful weapons being used again.

President Obama has made marked progress toward addressing the dangers of nuclear war, including signing New START and negotiating the Iran deal. But there is at least one more thing he can do before he leaves office to promote nuclear security: alter his nuclear modernization plans.

The current nuclear modernization plan—which will upgrade all three legs of the nuclear triad and cost $350 billion over the next decade and $1 trillion over the next thirty years—will exacerbate acute budget pressures and bring nuclear priorities into conflict with conventional ones. The inability of the Pentagon to fund its nuclear modernization programs without decimating conventional programs is illustrated by the proposal to set up separate budget accounts outside of the U.S. Navy and Air Force. Every dollar spent on nonessential nuclear capabilities endangers one that is needed for systems critical to deterrence, national defense or important domestic investments. Both recent and distant history suggests that Congress is unlikely to appropriate the full amount requested for the current modernization plans. To ensure that the next nuclear arsenal is balanced, stabilizing and meets deterrence requirements, the president must review his current modernization plans to ensure that they are realistic given current fiscal constraints.

Recommending cuts to the U.S. nuclear arsenal is not easy. All things being equal, the conservative impulse to hedge against uncertainty is prudent. Each nuclear modernization program is supported by a set of reasonable arguments and appears valuable for specific scenarios. Certainly, Russian aggression in Georgia and Ukraine, and China’s expansion of its territorial claims into the South China Sea, require the United States to ensure that it can deter sophisticated adversaries from threatening its allies.

However, these considerations miss the larger picture. There is little evidence that niche nuclear capabilities, such as cruise missiles and tactical gravity bombs, are necessary to deter adversaries, especially in an age where Russia and China calibrate their aggressive actions to remain far below the threshold of where nuclear use would be plausible. And it is important to keep in mind that when it comes to military spending, the United States continues to outspend its adversaries by a wide margin—spending which yields vastly superior conventional forces.

Moreover, all things are not equal: in an age of finite resources, nuclear modernization programs will crowd out other defense priorities, including systems and programs that are designed to respond to the threats that the United States and its allies face today. Without expeditious action to bring the plans under control, these proposed programs are likely to provoke political battles that further raise the costs of modernization and imbalance the triad with imprudent cuts. The benefits of retaining redundant or niche systems in the force—such as the air-launched cruise missile, an extra two ballistic missile submarines (SSBNs), tactical nuclear weapons in Europe and a new intercontinental ballistic missile (ICBM)—simply are not worth $130 billion over thirty years.

While the monetary and opportunity costs are relatively easy to tabulate, the broader costs of nuclear modernization are unappreciated and poorly understood. Rising U.S. expenditures on nuclear weapons are already raising concern among allies and nonaligned states around the world, undoing much of the goodwill engendered by President Obama’s 2009 Prague speech, where he rededicated the country to a vision of a world without nuclear weapons. The start of the modernization cycle comes at an unfortunate time for the global nonproliferation regime, which is trying to reduce reliance on nuclear weapons—such as Germany calling for the withdrawal of U.S. nuclear weapons from its territory.

Lastly, modernization comes at an unfortunate time in international security. Rising tensions with Russia and China mean that these countries are closely watching what the United States does with its arsenal. Increased spending and public assertions that nuclear weapons can help the United States prevail over its adversaries in a crisis could provoke reactions in these countries, and they may feel pressure to ramp up their own modernization efforts in order to ensure that their forces remain survivable. The result, as former U.S. Secretary of Defense William Perry has warned, could be a costly and dangerous new arms race.

Avoiding a new arms race, restraining nuclear proliferation and maintaining a balanced nuclear deterrent all require decisive action to bring the current nuclear modernization plans under control. If President Obama does not do that before he leaves office, it will be much more difficult for his successor, whoever she or he might be, to stop these programs because of the sunk costs in the budget, without undermining the significance of Obama’s visit to Hiroshima.

Lawrence J. Korb is senior fellow at the Center for American Progress and was the Assistant Secretary of Defense for Manpower, Reserve Affairs, Installations and Logistics from 1981–85.