Vladimir Putin's Dicey Dilemma: Russia Stands at a Fateful Fork in the Road 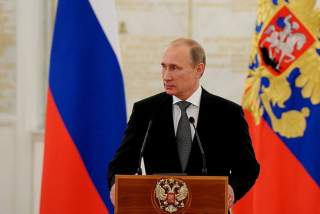 At this week’s summits of heads of APEC and G20 states, President Obama will find himself face-to-face with a leader whom he has demonstrably shunned for the past year. He should be prepared.

When it became clear that no one was willing to mount a military response to Russia's military aggression against Ukraine, President Obama's speechwriters settled instead for a narrative. Crafted by Russia-watchers whose hopes were dashed by Putin's return to the Kremlin in 2012, the headline of that story declares that Russia is a loser that does not matter anymore.

According to this argument, Russia's days as a global player are over. Instead, it is now a power in terminal decline: its economy collapsing, its population shrinking and its last-century industrial base no longer making anything the world wants to buy. Indeed, by stealing Crimea, it has only succeeded in isolating itself from the mainstream of the twenty-first century.

President Obama voiced this view in August when he said: "Russia doesn't make anything. Immigrants aren't rushing to Moscow in search of opportunity. The population is shrinking."

To quote Will Rogers: “It ain’t what folks don't know that troubles me; it's what they know that ain't so.” Is Russia isolated? Is its economy failing and population shrinking? Is its industry irrelevant in the twenty-first century?

After Russia annexed Crimea, the United States called on the world to condemn this blatantly illegal aggression. But when a UN resolution doing that was put to a vote, a large portion of the members refused to support the proposition. These included China, India, Brazil, South Africa, Egypt, Iraq and even Israel. A month after the United States and other heads of the G8 excluded Putin from their summit, President Rousseff of Brazil and her BRICS colleagues (who together represent almost half the population of the globe) welcomed the Russian leader at their summit in Fortaleza. This week, Putin is an honored guest of his good friend Xi Jinping in Beijing before going from there to the G20 meeting in Australia that follows.

The Russian economy certainly slowed last year and is projected to show close to zero growth in 2014. But what about the economies of the EU? They, too, have fallen back into their third recession since the financial crisis of 2008. If one compares the performance of the Russian economy in the fourteen years since Putin ascended to power with that of the EU, Russia has grown tenfold (from $200 billion in 1999 to $2 trillion in 2013), while the EU economies have struggled to double over the same period.

Last year, the United States maintained its position as the favorite destination for immigrants, legal and illegal. Who was number 2? Few readers will know that the answer is Russia. Contrary to the oft-repeated trope about Russia shrinking away, its population began to grow in 2010. In contrast to Germany, Italy or Japan, Russia's natural population is now increasing, the number of births each year exceeding the number of deaths. Moreover, Moscow has been a magnet for immigrants, with more than 2 million recent arrivals.

Before repeating the line about Russia no longer manufacturing products anyone wants, Obama should be prepared for a pointed question from Putin. In the past month, U.S. efforts to launch a rocket and test a spacecraft have crashed and burned. Expect Putin to ask whether the United States still wants to hitch rides on Russian-designed, Russian-manufactured, Russian-launched spacecraft that are currently the only way American astronauts can get to the International Space Station—or come back to earth.

Claims that were it not for oil and gas, Russia would be a banana republic without bananas also require a second look. In at least one dimension, Russia remains a superpower equal to the United States. As the only leader commanding a nuclear arsenal that can literally erase the United States from the map, Russia's president has a unique claim on the attention of every American counterpart. Nuclear weapons aside, Russia also has the most potent military forces in Europe. And despite European's best efforts to imagine a world in which military force is obsolete, Russia's recent actions in Ukraine remind us that their project remains unfinished.

What about Obama's argument that Russia is now only a "regional power"? Governing an expanse that stretches from St. Petersburg to Vladivostok, Russia shares borders with Poland to its west and China and the Pacific on its east. For over a millennium, the people who inhabited this land played a leading role in preventing the Mongols’ conquests in Western Europe and defeating Napoleon’s France and Nazi Germany. Last fall, when the United States found itself stalemated in responding to Assad's chemical-weapons attack on innocent civilians, Russia provided an escape hatch. Over the past year, it has proved an indispensable partner in the successful destruction of all of Assad's declared chemical arsenal. In current negotiations to stop Iran short of a nuclear bomb, after the United States and Iran, no nation matters more than Russia.

To recognize that for all its faults and failures, which are mammoth, Russia still matters more than many would like to acknowledge is not to defend or excuse Putin's crimes at home or abroad. But if President Obama's objective is to persuade Putin that his current course is unacceptable, he should focus on that country's real vulnerabilities—particularly those about which Putin is most neuralgic.

At the top of this list is a combination of economics, finance and oil. Even after the great financial crisis of 2008, Putin still believes that Americans are the masters of finance and economics. He has often expressed his deep conviction that the "greatest geopolitical catastrophe of the 20th century" was the disintegration of the Soviet Union. He has reflected on the analysis by former Russian prime minister Yegor Gaidar that identifies the squeeze on Soviet finances caused by the sharp drop in oil prices in the mid-1980s as the primary proximate cause of that event.

In the past year, Putin has seen oil prices drop by over 25 percent and the value of the ruble plummet by more than one-third. In his DNA, this former KGB officer believes that this is, as Russians say, “no accident." Behind such dire developments, he suspects the hidden hand of the CIA. His worst nightmare would be for Russia to unravel on his watch.

This is the moment for Obama to help Putin understand that he now stands at a fateful fork in the road. If he moves swiftly to end the conflict with Ukraine by offering terms acceptable to Ukrainian president Petro Poroshenko, he can restore economic relations with the West, gain access to advanced technologies required to increase future production of Russian oil and gas and modernize other sectors of the Russian economy, and thus ensure Russia's chance for a stable, prosperous future. The alternative is to persist on a path that presents growing risks of what he fears most.