Voters Are Rejecting the EU's Hubris 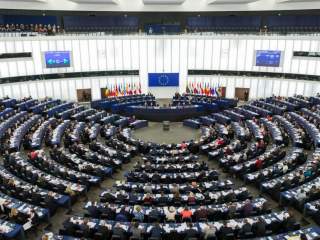 In its “advisory referendum” on the European Union’s association agreement with Ukraine, the Dutch electorate rejected this foray beyond the EU’s frontiers while manifesting general unease about where the EU is heading. Effectively, this was a vote of no confidence in the EU’s Eastern Partnership, which hatched the ill-fated accord with Ukraine.

In conjunction with monetary policy and management of the migrant crisis, the Eastern Partnership completes a trifecta of EU policies which were well intentioned, but poorly conceived and implemented with little appreciation of risks or consequences. By provoking a violent reaction from Russia, the Eastern Partnership made an intended partner, Ukraine, a victim.

The Eastern Partnership was launched in 2009 to broaden political and economic ties with Armenia, Azerbaijan, Belarus, Georgia, Moldova and Ukraine, supposedly “in parallel with the EU’s strategic partnership with Russia.” With each, the EU initiated negotiations for an association agreement plus a so-called Deep and Comprehensive Free Trade Area based on the acceptance by the partners of the bulk of the EU’s regulations and practices. In no case did the EU accept practices from the partner countries; the concessions were entirely one-way.

In effect, the partnership asserted an EU near-abroad in the east, which overlapped Russia’s declared near-abroads to the west and south. While purportedly non-zero-sum toward Russia, the negotiations were anything but. The association agreements sought to export the EU’s regulatory structure to partner countries at the expense of their important and long-established economic ties with Russia. Indeed, vocal EU advocates of the partnership bragged that it would ultimately replace Russian influence. In some cases a collateral objective was to bring the partner country, not into the EU, but into NATO. To add insult to potential injury, Brussels openly declared the partnership a “civilizational choice,” a characterization which not surprisingly went down badly in Moscow.

Azerbaijan and Belarus found the demands of the partnership overly onerous and refused, while Armenia succumbed to Russian pressure not to sign an association agreement, and rather joined Moscow’s proposed Eurasian Economic Union. Georgia was the most eager to associate itself with the EU and the most prepared to make the internal reforms required. Moldova, in contrast, was utterly unfit for association status, but signing on further split an already deeply divided population. Conditions in Moldova, the poorest country in Europe, have deteriorated sharply since.

Ukraine was the key country targeted by the Eastern Partnership, both because of its size and geography and because of its potential. It is fair to say that no non-Baltic state emerged from the Soviet Union with more of the attributes of a modern economy and society than Ukraine. However, pervasive corruption by a kleptocratic elite over more than two decades robbed the country of its great promise. Thus, Ukraine perhaps appeared a good candidate for an EU partnership.

Two factors stood in the way: Ukraine’s own political culture, and Russian interests. The former is well documented and need not be rehashed here. The Russian factor is, however, not as simplistic as often portrayed. It is very true that Russia’s ruling elites condescend shamefully toward Ukraine and do not acknowledge it as a legitimate or independent state. Moscow asserts a suzerain superiority over its neighbor. However, political leaderships in Kiev confirmed these Russian prejudices by compromising Ukrainian sovereignty in exchange for cheap oil and natural gas. The Russian-Ukrainian relationship as practiced on both sides was of suzerain patron and acquiescent client state. Even when President Viktor Yushchenko enunciated a nationalist program, his prime minister, Yulia Tymoshenko, conducted policies almost entirely satisfactory to Moscow.

The Eastern Partnership directly threatened this relationship, seen in Moscow as a vital national interest. The thousand-page association agreement for Ukraine would radically alter economic ties with Russia and compel Kiev into a series of derogations of its sovereignty to Brussels at Moscow’s expense. Kiev certainly could not adhere both to the Eastern Partnership and to the Eurasian Economic Union, although many in Kiev wanted both, to maintain the advantages of Ukraine’s east-west geography. Proposals from both Moscow and Kiev to engage in three-way discussions, resolving potential conflicts, were firmly rejected by Brussels. In time, Moscow came to view the EU proposal less as an effort to engage Ukraine than to absorb it into EU structures, and then into NATO. (These issues are discussed at greater length in my contribution to Roots of Russia’s War in Ukraine.)

Subsequent events are well known, though it is worth noting that the political upheaval against the corrupt and vicious regime of Viktor Yanukovych was not focused on Russia but on domestic abuses of power. Most Ukrainian public opinion tended to be either favorable or neutral toward Russia, while few citizens appreciated that the association agreement required Ukraine to choose a European orientation at the expense of its traditional ties with Russia.

The most curious aspect of the ensuing tragedy is that no one in Brussels or other European capitals gave credence to Russian warnings that it would not passively accept the loss of its position in Ukraine. Given that Moscow saw its primacy in Ukraine as a vital national interest, why did no European senior official consider that Russia might act forcefully (albeit clumsily) in response to the EU challenge? Although clearly violations of treaty obligations, Moscow’s actions in Crimea and the Donbass were reflective of the traditional great-power perspective prevailing in Moscow. There has since been considerable retrospective criticism of the Eastern Partnership from many European commentators, plus some private mea culpas within the Brussels establishment. In the assessment of a committee of the British House of Lords, the EU “sleepwalked” into the confrontation with Russia in ways similar to the European crisis of 1914.

The victim of this EU policy failure was and is Ukraine, which awaits from Brussels even a tithe of the price it has paid in money, let alone in blood. Sadly, “Ukraine fatigue” now dominates in EU institutions and in Washington, justified by the sluggish pace of reform in Kiev. In truth, it is the product of scant willingness to undertake the massive burden of supporting a genuine transformation in Ukraine.

While only a third of Dutch voters participated in last week’s referendum, they reflect a highly literate electorate, which in the past two years has been exposed to substantial public discussion both about the continuing failures of reform in Ukraine and the underlying shortcomings of the Eastern Partnership. After six decades in the European project, the Netherlands is very mature about EU issues. As shown in the referendum which rejected the EU’s constitutional treaty in 2005, the Dutch know the issues. They understand that the Brussels establishment has lost touch with the people of Europe—the infamous “democratic deficit”—and with the reasonable limits of EU ambitions. They understand, for example, that Europe and Greece would both be better off had Greece not been admitted to the Eurozone or Schengen. They have now rendered due judgment on the Eastern Partnership: that association status for Ukraine was premature, and challenging Russia in its front yard is dangerous.

The hubris dominant in Brussels has much to learn from the sober and sensible Dutch voter.