Wake Up, America: North Korea Is Running out of Patience 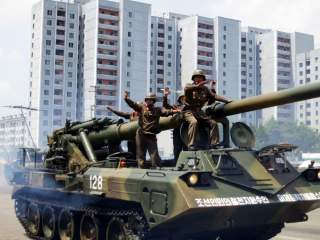 While the Obama administration negotiates with Iran, North Korea is giving every indication it intends to attempt another satellite launch this fall. If, as expected, the UN Security Council responds with more sanctions, Pyongyang will take that as a pretext for conducting its fourth nuclear-weapons test. As its Foreign Ministry spokesman put it on May 30, “[T]he only way to prevent a war between the DPRK and the U.S., which lack even elementary trust in each other and have long stood in mistrust and hostility only, is for the former to bolster up its defense capabilities so as to ensure balance of forces.”

To many in Washington, further arming by Pyongyang is a foregone conclusion. That assumption is wrong.

The belief in North Korea’s determination to arm is belied by the fact that from 1991 to 2003, it reprocessed no fissile material and conducted very few test launches of medium- or long-range missiles. It suspended its weapons programs again from 2007 to early 2009.

Over the past two years, while it continued to enrich uranium and resumed generating plutonium, it refrained from testing what it called its new “miniaturized” nuclear weapon or test launching any of its new longer-range missiles, a signal that it wanted to renew negotiations with the United States.

To many in Washington, such negotiations, unlike those with Iran, seem pointless if North Korea is unwilling to give up the handful of crude nuclear weapons it has. That ignores the potential danger that Pyongyang’s unbounded weapons programs pose to U.S. and allied security. It is on the verge of testing an advanced nuclear device that could be mounted on new, as yet untested longer-range missiles.

That assumption also ignores the possibility that Pyongyang may be willing to suspend its nuclear and missile programs if its security concerns are addressed. That was the gist of its January 9, 2015 offer of “temporarily suspending the nuclear test over which the U.S. is concerned” if the United States “temporarily suspend[s] joint military exercises in South Korea and its vicinity this year.”

Like most opening bids, that was unacceptable, but instead of probing further, Washington rejected it out of hand within hours.

It turned out that the North seemed ready to settle for modulating rather than cancelling the largest exercises and seemed prepared to suspend not just nuclear testing, but also missile and satellite launches and fissile material production in return. Its main point was the need for reciprocal steps to address both sides’ security concerns.

That opened the way to a resumption of talks this January, but after some back and forth, that initiative was squelched in Washington. Instead, U.S. officials continued to insist that Pyongyang take unilateral steps to show it was serious about denuclearizing and ruled out reciprocity by Washington. As the senior U.S. diplomat for East Asia, Daniel Russel, put it on February 4, “North Korea does not have the right to bargain, to trade or ask for a pay-off in return for abiding by international law.”

Some attribute this change of course to Kim Jong-un’s internal troubles. While resisting military demands for a budget increase, demands that may have led to the defense minister’s execution, it is possible Kim decided to “strengthen his deterrent” in his own version of Eisenhower’s bigger bang for a buck. While that explanation is plausible, it conveniently ignores Washington’s unwillingness to meet Pyongyang partway.

Perhaps worse than what Washington was reluctant to do was what it was all too willing to say. In an interview with YouTube posted on January 22, President Obama observed, "The kind of authoritarianism that exists there, you almost can't duplicate anywhere else. It's brutal and it's oppressive and as a consequence, the country can't really even feed its own people. . . . Over time, you will see a regime like this collapse." He acknowledged, however, that "the answer is not going to be a military solution," adding, "We will keep on ratcheting the pressure, but part of what's happening is that the environment that we're speaking in today, the Internet, over time is going to be penetrating this country." He went on, "And it is very hard to sustain that kind of brutal authoritarian regime in this modern world. Information ends up seeping in over time and bringing about change, and that's something that we are constantly looking for ways to accelerate.” [emphasis added].

In a January 25 rebuttal, the DPRK Foreign Ministry spokesman did not miss the gist of the president’s remarks, “This is little short of admitting himself that the U.S. lacks ability to stifle the DPRK and that a military option is not workable.”

At a May 18 press conference in Seoul, Secretary of State John Kerry chimed in with less diplomatic rhetoric of his own. “The world is hearing increasingly more and more stories of grotesque, grisly, horrendous, public displays of executions on a whim and fancy by the leader against people who were close to him, sometimes on the flimsiest of excuses,” he said. Calling the Kim regime “one of the most egregious examples of reckless disregard for human rights and human beings anywhere on the planet,” he said, “If their horrific conduct continues, it is hard to see how that referral to the criminal court would not take place.” He added, “That is why it is important for us to ramp up international pressure on North Korea to change its behavior,” citing China’s “extraordinary leverage.” Almost lost in the nastiness, Kerry noted, “We offer the possibilities of a normal relationship with normal economic assistance and other kinds of engagement with the rest of the world if he will simply make the decision to come to the table and deal on the issue of his nuclear program.”

Such rhetoric from top officials was hardly conducive to bringing the North to the negotiating table. While not nearly as vituperative as Pyongyang’s anti-U.S. diatribes, it stands in sharp contrast to how respectfully Obama and Kerry talk in public about Iran and its leadership.

Could negotiations this year have succeeded in heading off further nuclear arming by Pyongyang? Everyone in Washington seems to have an opinion, but no one knows—except Kim Jong-un, and he’s not talking any more.

Now talk of ratcheting up the pressure and waiting for the North to collapse is all the rage in Washington. That’s like whistling past the graveyard. Better to hope that Pyongyang’s tests fail and look for another opening to negotiate.