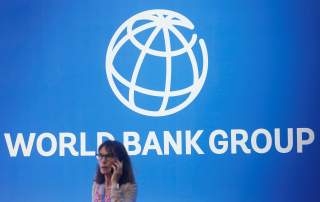 The World Bank is recovering from one of the worst disasters in its history: the six-year (July 2012 to February 2019) tenure of Jim Yong Kim as its twelfth president. His newly-appointed replacement, President David Malpass, takes over an organization that has lost its focus on reducing extreme poverty and promoting shared prosperity, declined in esteem among global institutions, and seen massive demoralization among staff as a result of futile organizational restructures. These problems certainly give Malpass a mandate to change course.

For that, he will receive no shortage of suggestions. Few will be radical enough to create the bank needed for the twenty-first century.

The new World Bank president should begin his assessment with a strong dose of harsh realism. Other development organizations—like the Asian Infrastructure Investment Bank, BRICS New Development Bank, and Gates Foundation—have emerged with impressive resources, faster processing and more focused agendas. The World Bank has relatively fewer funds and multiple missions far beyond its means. Moreover, its operations should be refocused on something attainable and, most importantly, something for which it is uniquely capable.

There has been a huge push into sustainability lending, including mandates requiring a quarter of all lending target climate change and that every dollar spent must consider climatic impact. In spite of these ambitious commitments, the impact of the bank’s climate aid is yet to be documented and is, at best, indirect.

However, the bank does have a significant comparative advantage—its deep understanding of global economic trends makes it a credible advocate for investments that create public goods which are indispensable for global poverty reduction. However, the World Bank is dependent on the sovereign guarantees of borrowing countries for its business model, so it cannot do much more than hand-waving when performing this role.

Yet, there are two ways to surmount this limitation: move away from country lending and shift the balance from loans towards grants. This would make the bank have to go regularly for replenishments to its members, making it more accountable and relevant to the global community.

Here is the problem with country lending (which economists refer to as “fungibility”)—one dollar is basically indistinguishable from another. That means you are actually funding a government’s next spending priority, and not necessarily the one stated as the reason for the loan. For instance, if the project the loan is meant for merits support, why is it not already in the recipient country’s national budget?

The World Bank should get out of country lending and into system lending. This means putting together projects in which there are systemic spillovers, such as new ways to improve regional cooperation that create stable interdependencies among economies. For instance, the African Free Trade Area has the potential to transform Africa, lower poverty, and boost growth. To contribute, the World Bank must develop a portfolio of projects that encourage economic interconnectivity, and not parallel strings of independent activities.

Think about the post-World War II Marshall Plan. It created a strengthened framework for interregional and cross-border cooperation, activating regional groupings of investments and creating an interconnected Europe of shared national interests. Projects were prioritized that required cross-border collaboration, and this required the building of cross-border institutional capacity that, for the most part, strengthened in the decades to come.

Finally, the World Bank needs a new theme, one in which it can play a direct role, one that donors can get behind and for which its performance can be assessed. I suggest fragility. The bank should seek to strengthen its focus on fragile and conflict-afflicted states and on addressing the challenges that these countries are exporting, including migration and violent extremism.

This effort involves governance, emergency response, and represents a global public good that the bank is uniquely positioned to provide—but its effectiveness will require shifting its funding model. A sovereign is unlikely to borrow for a project that creates benefits that are available to the world but for which its population carries the debt burden, such as stemming migration or reducing downstream emissions.

More broadly, the World Bank should prioritize systemic global connectivities, with fungibility as a key benchmark for the selection of its investments. This way, the bank will gain support to pursue credible and badly-needed global priorities that cannot be obtained without it.

Hilton L. Root is one of the originators of the Millennium Challenge Corporation for the George W. Bush Treasury Department, a professor at George Mason University and a senior research fellow with the Mercatus Center.