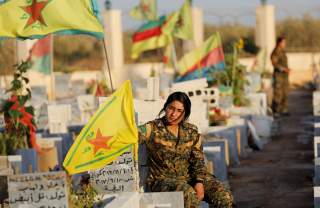 In December, President Donald Trump tweeted out a call for the withdrawal of troops from Syria. In his tweet, he declared that since the Islamic State was defeated, it was time for the U.S. forces to come home. Unfortunately, ISIS then demonstrated that it is alive and well, when a suicide bomber exploded himself in Syria, killing four Americans. The ISIS caliphate may have faded, but an estimated twenty to thirty thousand fighters in Syria and Iraq remain.

Perhaps this bombing was a message to the president from the terror organization. Whatever the motive, if the United States intends to remain a key figure in Middle East, it must be visible in Syria, if not on the ground, then from the air.

It is certainly the right thing to do. Our Kurdish-led allies, the Syrian Democratic Forces (SDF), have led the fight against ISIS on the ground, at the request of the United States, and are now at risk of being slaughtered by the U.S.’ NATO ally, Turkey. Turkish president Recep Tayyip Erdogan has vowed to dismantle the SDF and replace them with local forces. But the Kurds are the local forces. The civilian population in SDF territories numbers nearly four million, and the SDF has sixty thousand fighters, both men and women, all indigenous Syrians. Among the ethnic and religious groups represented in the SDF are the Kurds, Arabs, Yazidis, Muslims, and Christians. It is the responsibility of the United States to not only guarantee the safety of the Kurds and their partners for years to come but to also allow them to govern themselves. They fought ISIS for us, now we have to protect them.

President Trump has several viable options, if he wants the United States to maintain its influence in Syria. The first is to reverse the decision to withdraw American forces from Syria. But this is highly unlikely. The second is to support willing European states to create a buffer zone between Turkey and Syria to avoid Turkish aggression against the SDF. This also is unlikely, as Turkey has demanded its own forces be inside Syria. The third viable option is to enforce a no-fly zone (NFZ) in north-east Syria to prevent a Turkish “slaughter” of the SDF.

A NFZ has been tried before, successfully, post-1991, when Saddam Hussein threatened the Kurds in Iraq. Without boots on the ground, the United States implemented an NFZ in coordination with the United Kingdom and France. This allowed for the safety of the Kurds—to date—and the eventual creation of the Kurdistan Regional Government (KRG). The KRG has been extremely helpful to the United States. During the 2003 Iraq war, it was the one safe haven in all of Iraq where not one U.S. soldier lost his or her life during the entirety of the war.

Today, President Trump has an opportunity to create another region in the Middle East, friendly not only to the United States but also towards the rest of the West. The SDF in Syria is in a much better position than the Iraqi Kurds were in 1991. The SDF in Syria has held elections, has created local councils with representatives of different religions and ethnicities, and has allowed women to participate equally as men. The SDF has been a self-administering entity since 2015. All the SDF lacks is security in the air.

Implementing a NFZ would require countries like France to keep their troops on the ground to discourage Turkey from invading. French president Emmanuel Macron has promised to keep French forces in Syria for another year after the loss of the American service members. Others, like the British and the Dutch, are also willing to assist the SDF with ground troops, as long as they have American air power backing them.

Without U.S. boots on the ground, establishing an NFZ can allow the president to keep his promise to fully withdraw while still standing behind our allies the SDF. U.S. credibility in the region is at risk otherwise. Ignoring the plight of the SDF will force them to cut a deal with Syria’s Bashar al-Assad and Russia’s Vladimir Putin, which would undermine U.S. national security.

The United States cannot allow Syria to go back to pre-2011, before the revolution. A troop withdrawal would legitimize the Assad regime, allow Iran to expand, and empower Russia. But all this can still be prevented by creating a safe haven for the SDF in northeast Syria through a no-fly zone.

Diliman Abdulkader is the Director of the Kurdistan Project at the Endowment for Middle East Truth (EMET). Abdulkader is a Middle East analyst, educates lawmakers on Capitol Hill on the Kurdish plight. The author was born in Kirkuk. Follow him on Twitter @D_abdulkader