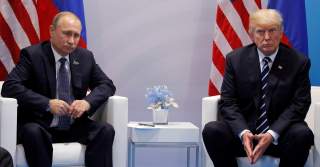 Presidents Donald Trump and Vladimir Putin have decided to meet on the sidelines of the Asia-Pacific Economic Cooperation summit in Vietnam, and there is only one question that each Chief Executive needs the other to answer. For Putin, it is, “Who’s in charge?” For Trump, it is, “What’s Russia’s game?” How—and whether—those questions are answered will determine the trajectory of U.S.-Russia relations moving forward.

If the Kremlin undertook active measures in 2016 to favor the candidacy of Donald Trump, first over other Republican challengers, then over that of Hillary Clinton, then the Russian government, ten months into the Trump administration, must be asking whether any such effort was worth it. The driving force for Russia policy has shifted from the Executive Branch to a much more Russia-skeptical Congress, while Trump has appointed to the key portfolios dealing with Russia matters in the U.S. national security establishment people who would not have been out of sync with a Jeb Bush, Marco Rubio or even Hillary Clinton administration. There is not even the pretence of a “reset” or sea-change in U.S. policy. Despite his personal statements, the president seems to be have been quite passive while his Treasury Department has tightened sanctions enforcement, his State Department has reiterated the same positions on Ukraine and Syria that were promulgated by the Obama administration and his Defense Department is moving ahead with finalizing the details as to how U.S. lethal military assistance will be provided to Ukraine.

In February, when faced with the first signs that a Trump administration might not push for major shifts in U.S. policy towards Russia, Russian experts and politicians counseled patience. They noted that Trump would need time to get “his” people into the key positions, to take control of the policy process, and to change the “default” policy positions put into place during the second term of the Obama administration, which was still guiding different parts of the national security bureaucracy in the first weeks of Trump’s stewardship of the Executive Branch. Such an assessment is no longer tenable today. Either the people whom the president has selected and the policies they are carrying out reflect the true vision of the Trump administration—or, at some undisclosed point in the future, Trump will purge his national security team and issue new directives.

It is this question that Putin needs to get answered. Otherwise, he has no reason to trust any assurances he may receive from Trump in any private meeting—after all, he already has past experiences of good personal encounters with George W. Bush that somehow never translated into concrete orders making their way down the bureaucracy. But Trump may have a bone to pick with Putin as well.

After their extended conversation at the G-20 meeting in Germany earlier this year, Trump seemed to indicate that the Russian president understood the need for showing concrete, positive results in order to create momentum for shifting the downward spiral of the U.S.-Russia relationship—something that would validate Trump’s own contention from the campaign trail that Russia could contribute to American security in a fashion that would justify dealmaking with the Kremlin. Instead, over the summer and into the fall, the Russian strategy around the world appears to be to create problems for the United States. Moscow provides the financial lifeline for the embattled regime of Nicolas Maduro in Venezuela; Russia gives minimal support to international efforts designed to pressure Kim Jong-un (and this may be driven more by Putin’s need to preserve his partnership with Japan’s prime minister Shinzo Abe than any desire to help support Washington); and Putin will travel to Asia fresh from a high profile summit with Iranian president Hassan Rouhani. The principal agenda item between Putin and Trump is going to be the situation around North Korea—with Trump asking for additional Russian help in containing the crisis. It should be noted that whenever a U.S. partner has a dispute or disagreement with Washington, Russia seems ready to rush in to provide an alternative—especially in Moscow’s cultivation of America’s traditional Middle East partners of Egypt, Saudi Arabia and Turkey.

So Trump may want to know whether Putin is truly interested in working on improving relations, or whether Moscow’s strategy for the foreseeable future is to act as the spoiler whenever possible.

This sets into motion a catch-22 where Moscow cannot offer any major concession—whether on Syria, Ukraine or North Korea—to Washington without the United States first demonstrating its good faith by offering some sort of up front compromise; but where the Trump administration has no political capital to take such a politically risky first step in the absence of concrete Russian steps—which the Kremlin is not willing to do if there is no guaranteed quid pro quo. A Trump-Putin personal relationship cannot overcome this dilemma—no matter what sort of meeting may take place.