The War Comes Home: The Kent State Shooting at 50 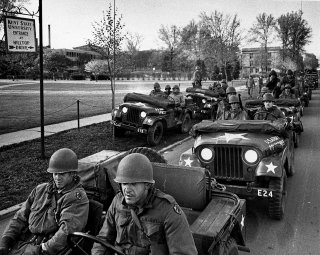 Fifty years ago, Ohio National Guardsmen fired sixty-seven rounds over thirteen seconds on the campus of Kent State University in Ohio. Thirteen bodies fell to the ground; four of them died. At that moment, a largely complacent anti-war movement was electrified. The students had been protesting America’s bombing of neighboring Cambodia during the Vietnam War. President Richard Nixon had hoped to settle the war by turning the fight over to America’s allies in South Vietnam and cutting a deal with the enemies in Hanoi. But as the feckless South Vietnamese regime crumbled, and the protest movement gathered steam, Nixon was forced to delay negotiations.

While not a turning point in the politics of the war, the shooting revealed the administration’s failed strategy. In the subsequent years, Kent State, much like the Tet Offensive, the My Lai massacre, and the release of the Pentagon Papers, became a cultural event unto itself. Like these moments, the Kent State shooting has become the subject of mythology and misunderstanding, its meaning shifting over time. Today, the iconic photograph of the event—a horrified young American lady crouched over the dead body of an American student—endures as an expression of a disastrous foreign policy’s impact on the lives of Americans at home.

Across the United States, Kent State pitted Nixon’s “Silent Majority” (older suburban whites, World War II veterans, and veterans of Vietnam) against a burgeoning counterculture movement that openly rejected the war, advocated for civil rights, and questioned the construct of patriotism. A divide broader than the war revealed itself at the core of the nation. While this dark moment grew of issues larger than the war in Vietnam, it began with a critical decision in that conflict.

Nixon Enters Cambodia: A Flashpoint in an Unpopular War

Like many of the agents involved in managing the war in Vietnam, Richard Nixon was viewed as a loathsome, scheming figure. Nixon was elected into office due partly to his "secret plan" to honorably extricate the United States from the disastrous blunder in Southeast Asia and partly to his appeal to that group of Americans who did not necessarily support the war but did not protest in the streets or join counterculture movements. He always knew reelection in 1972 would require extricating America from the war and doing so in a manner that ensured the preservation of American credibility overseas.

To end the war, or at least America’s involvement in it, while restoring American prestige, Nixon hoped to turn most of the fighting over to the Army of the Republic of Vietnam (ARVN), the South Vietnamese fighting force built up over years by American troops. His strategy of "Vietnamization" was doing just that, with mixed success. In truth, both Nixon and Henry Kissinger, his secretary of state and national security advisor, knew that the South alone could not hold up against a North with strong Soviet and Chinese support. Both understood that very shortly, there would be little to no support from the American public. For the White House, the key was to disengage with a fig leaf of honor.

Among the problems afflicting the Vietnamization program was the haven afforded North Vietnamese regulars and Viet Cong (VC) operatives in next-door Cambodia. Nixon's predecessor, Lyndon B. Johnson (LBJ), refused to authorize either American airstrikes or ground raids into Cambodia, despite pleas from his top general, William Westmoreland of the Military Assistance Command-Vietnam (MAC-V). LBJ did not want to own a legacy of widening a war he felt could not be won. Lê Duẩn, leader of the Central Committee of the Communist Party of Vietnam (VCP), had no such concerns and, in fact, occupied and exploited much of Laos and Cambodia as secure supply routes.

By early 1970, Nixon, Kissinger, and new MAC-V commander General Creighton Abrams believed a strike into Cambodia would give the ARVN its best opportunity to regain control over border areas and reduce infiltration into the populated coastal regions of Vietnam. Throughout the Johnson administration, Norodom Sihanouk, Cambodia’s Prime Minister, allowed North Vietnamese Army (NVA) and VC forces free access to the country.

The military coup that swept right-wing Prime Minister Lon Nol into power in Phnom Penh in August of 1969 created an opportunity to clear out the North Vietnamese forces in their support areas in the eastern portions of Cambodia and “the parrot’s beak” area north of Saigon. This disruption of the North Vietnamese support area would allow for ARVN forces to clear out the unsupported North Vietnamese forces in South Vietnam. There was also the illusory hope that this incursion could capture the Central Office for South Vietnam, the command node for all Northern operations in the southern portion of Vietnam.

On the evening of April 30, 1970, President Nixon, who had already promised an American reduction of 150,000 U.S. troops from Vietnam, addressed the nation and announced an American incursion into Cambodia. More than 32,000 American G.I.s, along with more than 50,000 ARVN soldiers, had already entered Cambodia to destroy logistics and command and control cells of the Viet Cong, the North-supported guerilla force that fought against South Vietnam and the United States.

As early as 1965, the American college campus was the beating heart of the Vietnam War protest movement. Initially relegated to small groups of activists, the movement spread as the televised war continued with unclear success over the next three years. Over time, the movement grew intertwined with the counterculture movement, an anti-establishment phenomenon that rejected war, the notion of patriotism, and traditional American customs. When the stunning Tet Offensive in January 1968 demonstrated that no end to the war was in sight, anti-war fervor exploded across the country, with marches and protests in major cities. By April of 1970, American campuses served as the final redoubt for a fading antiwar movement. Nixon and Kissinger expected immediate blowback on American campuses. They got it, and more.

Nixon's announcement roused the antiwar movement on colleges around the country almost immediately. On the Kent State campus, for years a long-term sanctum for the counterculture movement, the reaction was initially measured. A few dozen students gathered peacefully on spring's first warm day, Friday, May 1. A group demonstrated its concern with Nixon’s announcement by symbolically burying the American Constitution on campus. By that evening, the mood had shifted. Students, many of whom had been drinking all afternoon, lit fires on streets in downtown Kent, stopped cars on the main thruway, and threw rocks through windows of local shops. In an attempt to restore order, Kent’s mayor LeRoy Satrom ordered all bars closed. Students in the bars poured into the streets and joined the melee.

The next day, Saturday, May 2, concerned about escalation, the school administration restricted students to campus. Protests roiled at Kent State throughout the day. Students grew increasingly violent, throwing bottles at police and firebombing the campus ROTC building. Rioters shattered windows and threw rocks at government officials. Kent's mayor declared a state of emergency. With the campus in violent turmoil, the governor of Ohio called in the National Guard.

The campus ROTC buildings stood as a symbol of the evil American war machine and, as such, became an attractive target for the restless crowd. The armed troops arrived on the evening of Saturday, May 2, amidst a firebombing of the Kent State ROTC building. Guardsmen fired teargas to stop protestors from hitting the defenseless firefighters attempting to extinguish the blaze. By Sunday morning, the building had burned to the ground.

On Sunday, May 3, Ohio Governor Jim Rhodes, running for the Senate seat in the Republican primary, visited the campus. Rhodes, facing an uphill battle in the Republican senatorial primary scheduled for May 5, saw the protests primarily as a political opportunity. In an attempt to rally his law-and-order base, Rhodes gave a fiery press conference on campus in which he compared protestors to Nazi brownshirts and promised to use force to end the protests swiftly. That belligerent rhetoric only emboldened the activists. A battle was brewing.

The university ordered a ban on all rallies, an order subsequently determined lawful by the Sixth Circuit Court of Appeals. The rallies continued. By nightfall, one group of students snatched a police megaphone and demanded the removal of the ROTC program from campus.

By Monday, May 4, the campus turned into an occupied state. M114 Armored Personnel Carriers guarded the entrance and exit points. Helicopters flew overhead. Throughout the day, the presence of the rifle-wielding, gas mask-wearing National Guardsmen transformed the confrontation from an anti-war protest to a protest about the presence of the Guard. At the campus Commons at noon approximately 3,000 students gathered. This group, the largest congregation yet, protested not the American involvement in the Vietnam War, but the militarization of the campus. Approximately eighty Guardsmen confronted them.

In this febrile atmosphere, there was significant confusion around the legal status of the protestors and the role of the National Guard in the confrontation. The Kent State University leadership, in concert with the office of Governor Rhodes, distributed handbills declaring martial law. Martial law was not, in fact, formally declared. Neither the police nor the city were aware of the handbills. The National Guard leadership was unclear about its legal powers to support such an order. The university was unclear about who was legally in charge. The Guard members were basically amateur soldiers, poorly led, in a highly volatile situation that would have tested the most professional military unit.