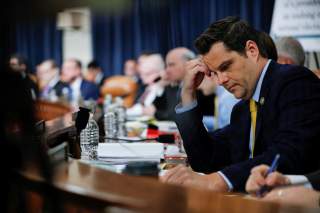 As the House of Representatives earlier this month debated a nonbinding resolution re-affirming the constitutional war powers of Congress, Rep. Matt Gaetz gave an address on the House floor.

The Florida Republican spoke for just a few moments but boldly proclaimed “If the members of our armed services have the courage to go and fight and die in these wars, as Congress we ought to have the courage to vote for them or against them. And I think it’s ludicrous to suggest that we are impairing the troops from doing their job by not doing our job articulated in the Constitution to speak to these matters of war and peace.”

Earlier that day, Gaetz had attended the burial of a constituent at Arlington National Cemetery. That soldier died in service to this country just a few weeks prior while deployed to Afghanistan, in the very war Congress refuses to cast a vote on.

Gaetz’s words were especially meaningful to me because I served with that fallen service member. We trained together, deployed together and fought together. He was a father, a friend and a warrior.

As a special operations soldier with multiple deployments to Afghanistan, this service member and his teammates have remained on the front lines of a war that has claimed the lives of more than two thousand American service members.

His remains arrived on Christmas Day for the dignified transfer at Dover Air Force Base—a scene that has occurred all too many times since the war in Afghanistan began more than eighteen years ago.

Stories such as this are uncomfortable to hear. They should be.

War has extreme consequences. Every flag-draped coffin is a child, parent or spouse who won’t be returning home.

But in the last several decades, we’ve seen Congress choose to back away from tough decisions. Many have ceded their responsibilities, choosing instead to stand with their own party, or against the other party, or simply to avoid executing their constitutional duty because they lack the courage to lead.

But constitutional duty should never take a back seat to party politics, not when there are service members’ lives on the line.

If men and women are going to sacrifice their lives for this country, we should demand nothing less than Congress taking back its war powers and having a louder voice on foreign policy.

To get to a place where we truly honor the sacrifice of our service members, we need more actions like Gaetz’s actions. We need more members of Congress to see their constitutional duties as a requirement, not an option.

Nate Anderson is executive director of Concerned Veterans for America and an Army veteran with multiple deployments.