A War on Terror: Why India Made Its Big Kashmir Move One-Year Ago Today 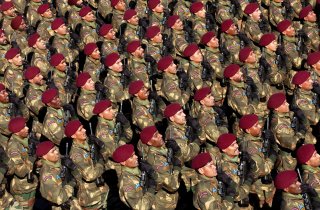 Both Pakistan and many human rights groups reacted with outrage. When I visited Islamabad last year, electronic billboards ticked off the days, hours, and minutes since India had imposed a curfew, never mind the hypocrisy of Pakistan as it did the same to Gilgit-Baltistan as it accused India of doing to Kashmir. Meanwhile, overt politicization of human rights groups and their consistent refusal to recognize that an end to terrorism is a precursor to rights improvement blunted their moral authority.

India’s actions did not arise from a vacuum. Prior to India’s decision to change Kashmir’s status, Pakistan-based terrorists regularly crossed into Kashmir and India more broadly to attack both security and government officials and ordinary civilians. The extension of Indian control over Kashmir has significantly improved security and undercut terrorism. In 2019, Pakistan-based terrorists infiltrated across the line-of-control 135 times: 57 before India changed Kashmir’s status and 78 after August 5. So far this year, only 33 infiltrations have occurred, a decline of over 40 percent over the same period year-to-year. Terror recruitment within Kashmir also fell: In the year before the revocation of Article 370, 172 locals joined terrorist groups in Jammu and Kashmir; so far this year, the number is 100. If that rate continues, then the decline in terror recruitment will be over ten percent for the year.

Pakistani Prime Minister Imran Khan is seeking to exploit the anniversary of India’s actions for propaganda and anti-Indian vitriol. He issued a directive dictating to the press language to be used to describe Kashmir. Pakistani journalists, for example, risk their employment if not liberty if they refer to “Indian-Occupied Kashmir” instead of “Indian Illegally-Occupied Jammu and Kashmir.” Likewise, they should refer to India’s actions as “demographic apartheid” and say “military siege” instead of “lockdown.” Pakistani news anchors must where black solidarity arm bands.

Khan’s strategy is clear: Distract Pakistanis not only away from any focus on his mismanagement of Pakistan’s economy and COVID-19 response, but also the fact that it was Pakistan’s consistent support for terrorism across the line of control precipitated India’s actions.

No amount of Khan’s rhetorical flak should distract from Pakistan’s terror complicity, the root cause of insecurity in South Asia. While the Financial Action Task Force (FATF) has begun to address Pakistan’s terror problem, it was diplomatic nicety rather than an objective consideration of facts that allowed Pakistan to remain on the FATF grey list in June 2019 rather than face the sanctions of a formally black-listed countries. In recent weeks, the Pakistani senate had passed two reforms necessary to address FATF concerns about Pakistan’s terror complicity, but even if the Pakistani government and, more importantly, Pakistan’s Inter-Services Intelligence agency were sincere, the fact that such reforms are considered openly controversial within the Pakistani government should raise red flags.

So too should the fact that recent UN sanctions committee actions suggest Pakistan remains deeply invested in terror support. Indeed, while Pakistani diplomats say they are taking actions against UN-designated persons, official Pakistani protestations of ignorance about the whereabout of Masood Azhar, the UN-designated leader of the Pakistan-based Jaish-i-Mohammed terrorist group, belies this. So too does the saga of Ehsanullah Ehsan, the former spokesman of Tehreek-i-Taliban Pakistan, a man responsible for one of the bloodiest terrorist attacks on Pakistani soil who ‘escaped’ from prison and now appears to be under the protection of Pakistan’s intelligence service. Nor has there been any substantive action in the case of the Lashkar-e-Taiba terrorists who attacked Mumbai more than a decade ago. The decision by the Sindh High Court to convert the death sentence for the murder of American journalist Daniel Pearl into a seven-year sentence underscores how populist incitement has trumped rule-of-law in Pakistan today. Now, it appears that rather than crackdown on the type of militancy support that presaged India’s actions in Kashmir, Khan’s government seems inclined to use the COVID-19 crisis to seek a softening or delay of FATF demands and commitments ahead of the October 2020 plenary.

Khan’s actions are hypocritical for other reasons. Within Pakistan, state security continues to target not only Gilgitis, but also Pashtun, Sindhis, and Balochis. Any Pakistani criticism of others’ respect for religious liberty also falls flat, given the Pakistani government’s endorsement of Chinese concentration camps targeting Uighur Muslims and the sense of impunity for violence against minorities that leads Peshawar’s elite police to pose for a selfie with a man who acknowledged murdering American citizen Tahir Ahmad Naseem, charged under Pakistan’s intolerant blasphemy laws but whose real crime was being from the Ahmadi sect.

Pakistan can castigate India—and, certainly, India has also made some mistakes over the past year in Kashmir although it has also begun investing in infrastructure, social development, and employment projects—but rather than speak from the moral high ground, Pakistani authorities appear mired in a cesspool of immorality and cynicism, dug over the decades by successive administrations and counterproductive Inter-Services Intelligence agency policies. Pakistani officials and human rights activists may demonize India and seek to return the status quo ante, but a return to the past is impossible. Instead, a far more productive approach would be to embrace a zero-tolerance policy toward terrorism while simultaneously working with India to finetune its actions and to invest in Kashmir in order to shape a future where all of its people can benefit.