War of the Words: Why Xi Jinping's Big Speech Means Little to Taiwan 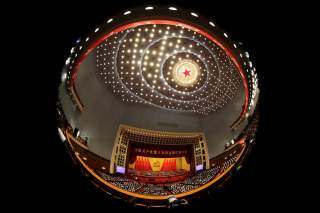 China has the resolve, confidence and ability to quash Taiwanese independence in any form, Chinese president and Chinese Communist Party Chairman Xi Jinping told a packed audience during his three-and-a-half-hour statement to the Nineteenth National Congress in Beijing.

In his speech, which mainly focused on building a “modern socialist country,” Xi made a total of four references to the so-called 1992 Consensus, a construct that Beijing has insisted upon as a prerequisite for cross-Strait dialogue. Unlike her predecessor, President Tsai Ing-wen of the Taiwan-centric Democratic Progressive Party has refused to abide by the consensus and its inherent “one China” principle, choosing instead to acknowledge the progress that has been made in cross-Strait relations since the 1990s and to commit to constructive relations with Taiwan’s large neighbor by maintaining the status quo.

In response to what it regards as an intransigent stance by Taipei since Tsai assumed the presidency on May 20, 2016, Beijing has substantially reduced the frequency of high-level exchanges between the two sides, and a hotline linking the Taiwan’s Mainland Affairs Council and China’s Taiwan Affairs Office has gone largely silent. China has also increased the pressure on Taiwan’s international space by resuming efforts to steal the island-nation’s official diplomatic allies (after Panama there are indications that the Dominican Republic could be next) and blocking Taiwan’s attempts to participate in multinational forums.

So far these retaliatory measures have not unduly affected the Tsai administration domestically, and Taipei’s firm position on the matter appears to have received the blessing of key allies within the international community—a key variable in Taiwan’s ability to stand up to Beijing. President Tsai’s insistence during her Double Ten National Day address on October 10 that she and Taiwan would not be “bullied” by authoritarian China was also widely supported by the Taiwanese public, which is wary of any external attempts to undermine their way of life.

In his speech, Xi also referred to his government having succeeded in preventing Taiwanese independence—a claim that flies in the face of developments in Taiwan, from dwindling support for unification, to the 2014 Sunflower Movement, to the resounding defeats of the China-friendly Kuomintang in the 2014 and 2016 general elections. Also, the claim ignores the fact that Taiwan already is an independent political entity under the official name the Republic of China. Xi’s reference to the November 2015 “historical meeting” with President Tsai’s predecessor, Ma Ying-jeou, meanwhile, showed just how little Beijing has actually accomplished through its cross-Strait strategy. Ma was highly unpopular and neutralized at the time of the symbolic meeting. He was also on his way out and therefore in no position to influence the future course of relations with China.

For all intents and purposes, Xi’s remarks on Wednesday were a reiteration of Beijing’s previous (and arguably failing) policy on Taiwan. In fact, they were a reiteration of the things that any Chinese Communist Party leader has to say—insistence on “one China,” the “1992 consensus,” “one country, two systems” and opposition to “separatism” in all its forms. Xi proposed nothing new and Taiwan did not figure prominently in his long remarks, which arguably was a rather reassuring signal and an indication of continuity and reflection of the greater challenges that he will face during his second term. The two sides have decided to dig their heels in, and thus the charade, the word games and the rhetoric that often flies in the face of reality, continue. What matters isn’t so much what Xi said in his marathon speech, but rather what actions his government takes next.

Responding to Xi’s remarks yesterday, Taiwan’s Mainland Affairs Council said in a statement that the unilateral imposition of a “one China” on Taiwan was as unpalatable as it was unlikely to win the hearts and minds of the Taiwanese.

If there was any sign of continuity in Beijing’s approach to Taiwan, it was punctuated by the rather bizarre presence of the Kaohsiung-born Lu Li-an as one of the ten communist party representatives of “Taiwan Province” at the party congress. As the only representative born in Taiwan, Lu’s role was purely propagandistic and yet another attempt by China to parade a native Taiwanese who ostensibly supports the party’s approach to the Taiwan “question.” It is doubtful that this tactic, like every attempt before it, will have any impact on Taiwanese perceptions of Beijing and the island-nation’s desire for unification.

J. Michael Cole is a Taipei-based Senior Fellow with the China Policy Institute, University of Nottingham, UK, research associate with the French Centre for Research on Contemporary China, chief editor of Taiwan Sentinel and project manager for the Taiwan Foundation for Democracy’s Taiwan Democracy Bulletin.