The War for Ukraine’s Schools 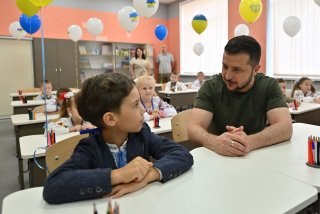 September 1 marks the normally joyous first day of school in Ukraine, but this year the occasion was muted. Russia has destroyed 286 schools and damaged more than 2,400 since it invaded Ukraine in late February.

Approximately 3,000 schools reopened in person but much of the picture remains uncertain and improvised as the war continues. To reopen in-person lessons, a school must have a bomb shelter and shelters are of varying degrees of quality. Many are ordinary basements with dirt or sand floors.

“I’ve been to many shelters with mold. They are doing their best, but even if [administrators] are willing to make the shelters, they don’t have funds for it,” said Anna Novosad, President Volodymyr Zelenskyy’s first minister of education and science.

Novosad has been crisscrossing the country, assessing the readiness of schools for months. She grew so concerned about the lack of preparation and the under-resourced schools that she banded together with Go Global Founder Oksana Nechyporenko to start savED, a charity seeking to raise $80 million to rebuild Ukraine’s schools in the north where Russian forces were pushed out in April.

The Ukrainian government issued recommendations on reopening schools late, giving schools two months to build bomb shelters without any funds or resources. According to martial law, all local government funds are subject to federal control, and everything goes toward military needs now.

But bomb shelters aren’t the only complication.

“Schools are not prepared for missile strikes,” Nechyporenko said.

If an air siren goes off during a lesson, students and teachers must immediately relocate to a bomb shelter. If a missile was fired from Belarus, it takes three to four minutes to land, while 20-30 minutes if shot from the Caspian or Black Seas. Lessons will be significantly delayed and interrupted this school year.

According to government data, 3,000 schools will reopen in person, 5,660 will operate virtually, and 3,602 will used a mixed method.

Schools may have to adjust during the school year, as Russia continues to target schools.

“The Russians know what they are doing. They are deliberately targeting schools,” said Novosad on September 1.

Novosad has examples at the ready. In city center of Zhytomyr, the Russian army only hit one school, nothing else. In Chernihiv, they damaged or destroyed twenty-seven of thirty-four schools.

In the small village of Katiuzhanka outside of Kyiv, the Russian army occupied the school, removing the pictures of Ukrainian historical figures like national bard Taras Shevchenko and replacing them with pictures of Vladimir Lenin.

“They target schools not because Ukraine may use them for defense, but they understand how crucial it is from an ideological perspective,” Novosad said.

She said Russian authorities burn Ukrainian books and replace them with Russian books.

Nechyporenko urged the donor community to make education a priority. Without schools, Ukraine cannot survive, she argued. The number one consideration for mothers deciding whether to return to Ukraine is schools.

Novosad and Nechyporenko emphasized that needs vary across the country, and that donors must work with local experts and NGOs on the ground to understand the differences before designing assistance programs and tailoring them to every region.

“In the north, the Russians stole everything. They even stole forks and spoons from kindergartens,” Novosad said.

Western Ukraine hosts a number of internally displaced persons, and she worries that teachers may struggle to integrate children from Russian-speaking areas in the south.

Near Kyiv, there aren’t any schools remaining in some places. In the Brovariy district, a small village with 500 kids near Kyiv, the Russian army burned down the only kindergarten and school.

In Russian-occupied parts of the country, Ukrainian parents are being forced to send their children to Russian schools or they will be fined. Russia is sending its own teachers in and trying to get Ukrainian teachers to collaborate.

Heavy shelling and bombing have prevented all schools from reopening in Mykolaiv, and students will be forced to go online.

Novosad worries that war plus online learning forced on students by the covid pandemic will leave Ukrainian students far behind their peers.

“The only thing that can save us is systematic tutoring and extracurricular activities to make up for the learning loss,” Novosad said.