Is the War in Ukraine Changing Israel’s Security Calculus? 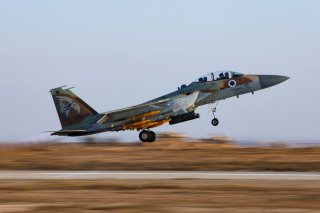 For most of its history, Israel has been able to swiftly and decisively overpower its Arab neighbors’ armed forces inside their territories. The ability to deploy disproportionate force against any challenge—not only to its sovereignty but also to its regional power projection—has been at the core of what Israeli military strategists commonly refer to as “deterrence capacity,” a euphemism for the Arabs’ fear of Israel.

But the decline of Israel’s “deterrence capacity” was hastened following the country’s humiliating ejection from Lebanon in 2000. Hezbollah, a militant group once dismissed by the United States and Israel as a “ragtag” militia, had forced the once “invincible” Israeli military from southern Lebanon.

Hezbollah’s capture and killing of several Israeli soldiers in July 2006 would provide Israel with the perfect pretext to deal a crushing blow to the organization and restore a measure of deterrence against its neighbors. But instead, the 2006 war would send deterrence into a free fall. The goal of the Israeli offensive had been to return the abducted soldiers, weaken Hezbollah, expel the group from southern Lebanon, and destroy its capacity to launch projectiles into Israel. None of these goals was met. Frustrations about the military’s unmitigated failure would prompt the Israeli government to establish sixty-three commissions of inquiry. The centerpiece of that failure, according to the Winograd Commission’s scathing report, was the “flawed” performance of Israel Defense Forces (IDF) ground troops. Israeli land forces, which, in 1982, could reach Beirut in a matter of weeks, would struggle in 2006 to occupy tiny villages located just a few kilometers into Lebanese territory.`

But while Hezbollah had been largely successful in stopping the IDF’s lumbering ground offensive in its tracks, there was little it could do to directly challenge Israel’s near-absolute air superiority over Lebanon. Israeli warplanes could enter Lebanese airspace mostly unchallenged both during and long after the war. Already before the 2006 war, Israel’s military prowess had become increasingly “air-centric.” But following the poor performance of its ground troops and the exposure of its naval vulnerabilities during said war, Israel’s ability to swiftly unleash the full fury of its military might within enemy territory would become increasingly defined by its airpower. Deterrence capacity, that pillar of Israeli strategic doctrine, had become increasingly synonymous with aerial supremacy.

In the ensuing years, Israel would seek to preclude any serious challenge to its air superiority.

At the military level, this meant conducting air strikes inside Lebanon and Syria to prevent mostly Russian anti-aircraft weapons from reaching Hezbollah. But to maintain aerial supremacy, airstrikes alone would not be sufficient. Israel would have to reduce or stop the flow of such potentially game-changing weapons at the source, i.e., Russia. To that end, the Israeli government would seek to insulate its cool but stable relationship with Moscow against tensions between Russia and the West.

Until 2015, Israel’s concerns about Moscow’s role in the Middle East were for the most part limited to Russia’s sale of game-changing military hardware, such as air defense systems, to Israel’s rivals, Syria and Iran, which could potentially find their way into the hands of Israel’s other non-state foes such as Hezbollah.

But Russia’s significance for Israeli security would undergo a qualitative shift in 2015 with Moscow’s military intervention in Syria. Russia’s decision to provide airpower to Syrian and Iranian-backed forces fighting ISIS and other anti-government rebels in the country proved decisive in restoring President Bashar al-Assad’s control over Syrian territory. It also made Russia the de facto gatekeeper of Syrian airspace and an unwelcome new variable in the Israeli security calculus. Until the Russians’ arrival in Syria, Israel had been able to carry out airstrikes against Iranian and Iranian-allied assets deep inside Syrian territory with little interruption. The Israeli raids were aimed at preventing a long-term Iranian military presence in neighboring Syria. But now, with the powerful Russian Air Force acting as the Syrian Air Force, the Israelis would need to win Moscow’s approval and cooperation before carrying out strikes inside Syrian territory. Precisely to that end, Israeli prime minister Benjamin Netanyahu, Israel’s chief of armed forces, and the general in charge of Israeli military intelligence rushed to Moscow shortly after the deployment of Russian military forces to Syria. The openly-stated goal of the visit was to set up a deconfliction mechanism to avoid “misunderstandings,” a euphemism for Israeli jets being shot out of the skies by Russian forces.

But Russia’s invasion of Ukraine, a country so central to the Russia-West rivalry, has complicated Israel’s efforts to decouple its high-stake balancing act with Moscow from Russia-West tensions.

None of Russia’s past military actions—not even its 2008 war in Georgia or its 2014 annexation of Crimea—could elicit the type of Western indignation triggered by the recent assault on Ukrainian sovereignty. This catapulting of the war to the forefront of Western consciousness and policy agenda has rendered the Israeli government’s hedging efforts far more exposed, more politically costly, and thus more difficult to sustain than before.

Indeed, under pressure from the Western alliance, and especially its most indispensable ally bar none, Washington, the Israeli government has already taken unprecedented measures against the Russian invasion that would have been unthinkable in the aftermath of the 2014 annexation of Crimea: Israel voted for the UN General Assembly resolution condemning the Russian invasion; more than once Foreign Minister Yair Lapid has openly condemned Russia’s invasion of Ukraine; Israel voted to suspend Russia from the UN Human Rights Council over massacres allegedly committed by Russian troops in Bucha, near Kyiv; Lapid has promised, more than once, that Israel would not lend itself to Moscow’s efforts to skirt Western sanctions; and banks in Israel have cut ties with sanctioned Russian banks.

The shift in the Israeli position has irked Moscow, though Russia’s response has thus far been largely contained. But should the Russo-Ukrainian War drag on and escalate beyond a certain threshold, the Russians may respond to Israel’s hardening stance on Ukraine by upending Israel’s hitherto free rein to carry out risk-free bombing raids inside Syria. Indeed, Israeli TV recently reported that a Russian S-300 air defense system had fired missiles at Israeli jets returning from raids inside Syria for the first time. Furthermore, the Russians recently summoned the Israeli ambassador to Moscow following an Israeli air raid on Damascus International Airport. Should tensions with Israel reach a tipping point, Russia may also give more leeway to pro-Iranian forces within Syria.

Such developments will make it easier for Iran to further entrench its military presence in Syria by building military infrastructure and cultivating local partnerships, something Israeli officials have repeatedly described as their “red line.”

But Israeli decisionmakers have in the past pragmatically revised their national security priorities, including their red lines, to accommodate new realities.

For instance, Israeli officials had for years declared repeatedly that one of their “red lines” in Lebanon was Hezbollah’s acquisition of game-changing anti-aircraft technology, which could undermine the Israeli Air Force’s freedom to operate in Lebanese skies. But when preserving that red line proved untenable over time, the Israeli military simply chose to live with this new reality: in April 2022, Israel’s outgoing air force chief Major General Norkin said his country no longer enjoyed unfettered aerial superiority over Lebanon.

In Syria, too, Israeli strategic planners may eventually conclude that the freedom to conduct risk-free aerial bombings and to prevent an entrenched Iranian presence may be desirable, but not vital, since they hinge on keeping Moscow happy at the cost of enraging the West, especially the United States, the guarantors of Israel’s security ever since its inception.

If Russia-West tensions facilitate the entrenchment of Iranian military forces in Syria by undermining Russia-Israel ties, Israel’s existence is unlikely to be threatened, despite suggestions to the contrary. Israel’s vast military capability is more than enough for responding to serious threats to its internationally recognized borders. Iranian entrenchment in Syria, however, does threaten a certain conception of Israeli national security that takes for granted the IDF’s right to operate freely in neighboring countries at will.

Sajjad Safaei is a Postdoctoral Researcher at Germany’s Max Planck Institute for Social Anthropology. Follow him on Twitter @SajjadSafaei0.