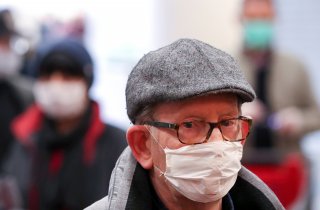 The United States, like most countries in the world, is aging. According to the United Nations, roughly 15 percent of the U.S. population is older than sixty-five, which is the highest proportion in the country’s history. This percentage is forecasted to continue to grow, reaching nearly 28 percent by the end of the century. By 2050, the United States is expected to have more people over the age of sixty-five than under the age of twenty, which will be a historical first.

Although many decry the domestic ramifications created by population aging, this demographic development has a major yet largely unrecognized international benefit: it significantly increases the likelihood of international peace, which is something my colleagues and I have observed.

Public opinion and scholarly analyses of aging miss this major positive development. Generational polarization is at an all-time high, as the differences between age groups on numerous issues, including race, climate change, and party preferences, are stark. A 2015 survey funded by the American Association of Retired Persons and other organizations in the field of aging found that the majority of the U.S. public view the elderly as an “other” group that is engaged in a zero-sum competition with the rest of society for resources. Indeed, some studies have found that the very use of generational labels, especially that of “baby boomer,” stimulates negative stereotypes, nicely captured by the dismissive retort popular among members of younger groups: “OK, boomer.” Media and academic analyses of the aging population also appear to be negative, with most analyses concentrating on the population’s likely major domestic costs. Additionally, much attention has been paid to the potential slowing of economic growth and massive new public expenditures for elderly welfare.

The international effects created by the shift from a younger to an older world are much more salutary. Countries with large numbers of young people (ages fifteen to twenty-four) as a percentage of the total adult population are more likely to engage in international hostilities than ones with older populations. With a surplus of military-aged citizens, soldiers are cheaper and easier to recruit and replace. Younger populations are also more easily radicalized, especially when the country is poorer with fewer economic opportunities.

The reverse dynamics occur in older societies. In fact, aging tends to reduce both states’ capacity and willingness to go to war. As societies age, governments are likely to dedicate an increasing percentage of their budgets to spending on elderly welfare, which is likely to reduce expenditures in all other areas, including the amount of money it spends on the military. Moreover, with fewer military-age citizens, soldiers can demand higher salaries, making them more expensive to recruit and replace. Governments of older societies are therefore less likely to jeopardize their soldiers by engaging in conflict. At the same time, survey data across many generations clearly indicate that the elderly are significantly less supportive of war than are younger individuals. Consequently, as older-age cohorts become a larger percentage of a state’s population, the political pressure against international conflict is likely to increase.

It is also important to recognize that while the U.S. population is aging, it is doing so at a slower pace than its main international rivals, China and Russia. For example, while the United States’ working-age population (ages fifteen to sixty-four) is forecasted to increase by 13 percent within the next thirty years, Russia’s is expected to decline by 23 percent and China’s by 18 percent. These very different demographic trajectories give the United States a substantial comparative advantage, both economically and militarily. The effects of aging across the great powers are therefore likely to inhibit the emergence of a dangerous “power transition” (that is when a rising power catches up to the existing leading power) between the United States and its chief international competitors. Studies have shown that the probability of international conflict grows when either the dominant country anticipates a power transition in favor of a rising state or states, or when such a transition actually takes place. By adding substantial support to the continuation of U.S. power superiority, global aging works against either outcome transpiring. It should be noted that immigration accounts for almost all of the United States’ forecasted population growth; if immigration rates are significantly reduced, so will the United States’ major demographic advantages compared to those of other great powers.

Demography is not destiny, but it is an extremely powerful force. Because aging states are likely to be significantly less aggressive internationally than younger ones, the future of international relations is likely to be more peaceful than the past—an outcome all can celebrate.