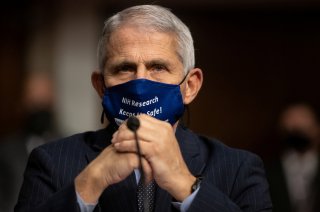 Top public health experts project a surge in coronavirus cases and deaths in upcoming weeks after Thanksgiving celebrations and during the holiday season.

While the Centers for Disease Control and Prevention (CDC) recently updated its guidance on holiday celebrations and small gatherings encouraging Americans to observe “at home with the people you live with,” the Transportation Security Administration reported more than five million people passing through its checkpoints during the days leading up to and after Thanksgiving—the highest it’s been since March.

“The travel that has been done has been done,” Dr. Anthony Fauci, the nation’s top infectious disease expert, said Sunday on ABC’s This Week. “Having said that, we have to be careful now because there almost certainly is going to be an uptick because of what has happened with the travel.”

Fauci warned of a similar jump in the number of cases around the Christmas season.

“So clearly in the next few weeks, we're gonna have the same sort of thing and perhaps even two or three weeks down the line. Martha, we may see a surge upon a surge,” he added.

Deborah Birx, coordinator of the White House coronavirus task force and Fauci’s colleague, echoed his concerns over the weekend, noting the country is “entering this post-Thanksgiving surge with three, four and ten times as much disease” compared to earlier spikes.

“If you’re young and you gathered [for Thanksgiving], you need to be tested about 5 to 10 days later, but you need to assume you’re infected and not go near your grandparents and others without a mask,” Birx said on CBS News’s Face the Nation, adding that people must “take it upon yourself to be restrictive” across the country, despite state regulations and guidelines that do not stress mask-wearing and social distancing efforts.

It can take over a week for the virus to appear on a test result, so anyone who takes a test just days after holiday celebrations and travel may still be carriers.

“We can expect that the hospital admissions will be spiking higher about two weeks after the Thanksgiving holiday, where extended families and friends traditionally gather in groups and there is an increase in travel,” Kenneth Foard McCallion, healthcare infrastructure expert and author of the new book COVID-19: The Virus That Changed America and The World, said in an interview via email. “The delay period between transmission of COVID-19 and hospitalization in serious cases has been about two weeks. So we will be collectively paying the price for many of us letting down their guard over the holidays.”

McCallion and public health experts urged Americans to use masks, social distance and avoid indoor, crowded places like restaurants and bars to mitigate the overwhelming spread of the virus and tame the exhaustion in hospitals across the country.

“But, remember, we’re not passive bystanders,” Brett Giroir, assistant secretary of health and human services told CNN’s State of the Union. “If we do the right thing—universal mask-wearing, avoiding indoor spaces, crowded bars, restaurants, indoors, all those [sorts] of things—we can still flatten this.”

“The way to mitigate the spread while we await the arrival of vaccines is the same as before: social distancing, the wearing of masks and avoiding large gatherings,” McCallion said.

According to The COVID Tracking Project, there were 93,238 people in the United States currently hospitalized with the virus as of Sunday—the highest it’s ever been.

As of Monday, more than 170,000 Americans are testing positive on average each day, numbers that more than double the daily averages in July when the United States saw another surge in coronavirus infections. Nearly 1.1 million Americans tested positive in the past week, bringing the total case count in the United States to more than 13.4 million—maintaining the worldwide lead in the number of cases compared to other countries.

On Wednesday, almost 2,300 people in the United States died from the coronavirus, the highest daily death count since May when deaths peaked at roughly 2,700. Even though medical professionals are better prepared to respond to a coronavirus infection as the proportion of people dying from the virus is far less than what it was when the pandemic first struck, millions of Americans have been impacted by the outbreak with the death toll consistently increasing.

But experts offered some hopeful news as the first batch of vaccinations should be available to prioritized groups in a matter of weeks. The CDC advisory committee on immunization practices is slated to meet Tuesday to determine the proper coronavirus rankings. Health-care workers are expected to be at the top of the list, followed by the elderly, especially in nursing homes, as well as nursing home staff and high-risk Americans.

Fauci noted that millions of vaccines will be sent to every state, with the states ultimately deciding distribution practices.