Was the Helsinki Summit Worth It? 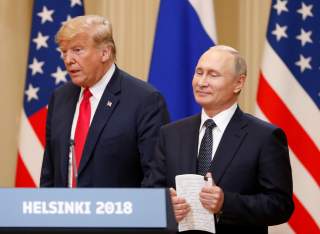 Knowing when to leave the stage is a great asset in life. It is a talent that actors, athletes and politicians rarely learn, leaving publics cringing or aghast at sub-standard performances. The same goes for presidents from time to time. Helsinki was a case in point.

If the meeting between Presidents Donald Trump and Vladimir Putin had ended with the prepared statements at the press conference, it would have accomplished exactly what it needed to at this dangerous moment of deeply troubled U.S.-Russian relations. While acknowledging continuing disputes and the hard road ahead in normalizing relations, the two presidents pointed to possible areas of cooperation, such as counterterrorism and non-proliferation; noted the special responsibility the two largest nuclear powers bear for preserving strategic stability; and pledged to reopen channels of communication to continue discussion of the disputes and possible cooperation. The presidents agreed on creating a bilateral group of business leaders to encourage trade and investment, and Putin proposed forming an expert council of influential scholars and former diplomats and military officers to help create “a philosophy for building bilateral relations in the long term”—in other words, a strategic framework.

There was nothing particularly new or innovative in this approach—it was broadly similar to what Presidents George W. Bush and Barack Obama had done in their initial approaches to Russia—but it should help defuse tensions and steer relations in a more constructive direction. What was of note, given the febrile imagination of anti-Trump forces in the American media and political establishment, was that Trump made no unilateral concessions, nor did he abandon American positions on any key issues. There was no hint in public of an agreement to withdraw American forces in Syria in exchange for a Russian pledge to help constrain Iran, no cancelling of exercises with NATO allies, no recognition of Crimea and no indication that sanctions would be lifted.

Thirty minutes of Q&A unfortunately jeopardized much of the good work. It was a jarring spectacle, to say the least. Trump took the bait on the issue of Russian interference in U.S. elections and would not let go. He did not say anything that he had not said before—expressing doubts about Russian involvement in the hacking, resurrecting the issue of Clinton’s lost emails, denying any collusion, blasting the ongoing Mueller investigation and deploring blatant attempts to tarnish his “brilliant campaign” and electoral victory. But it was disconcerting to hear him say all that while standing next to Putin on the world stage. Most disturbing was his admission that he did not know whom to believe about the election meddling: America’s intelligence services or Putin.

Putin made matters only worse by joining in the denunciation of the Mueller probe and attempting to muddy the waters. He feigned not having looked into the U.S. indictment of twelve GRU officers last Friday. But citing the U.S.-Russian mutual legal assistance treaty of 1999, he declared himself ready to invite U.S. investigators to sit in on the interrogations of GRU officers they suspected of committing crimes in the United States in exchange for the United States’ allowing Russian investigators to sit in on the questioning of U.S. intelligence officers they suspected of committing crimes against Russia. An “incredible offer,” as Trump put it, but perhaps not in the sense he intended. And while rejecting charges of interference and collusion and raising doubts about (without flatly denying) the existence of a Trump file of compromising material, he did note that in fact he had wanted Trump to win because he supported normalizing relations with Russia.

Trump had to know that his comments would roil the political waters in Washington, and he might have made them with that goal in mind. (And Putin too had to know that his remarks would only enflame the situation further.) The criticism was fast in coming from Democrats, as was to be expected. But Republicans offered Trump little support. Senate majority leader Mitch McConnell and House Speaker Paul Ryan backed the Intelligence Community on Russian interference; others, such as Senator John McCain, were more forthright in simply denouncing Trump.

This sharp rebuke of Trump’s conduct will only fuel resistance to his efforts to open up a constructive dialogue with Russia. As it did last summer with CAATSA (Countering America’s Adversaries Through Sanctions) Act, Congress will be tempted to pass further legislation limiting the president’s room for maneuver on Russia policy or to obstruct him in other ways. Seizing the opportunity, Senator Marco Rubio, for example, was quick to promote his proposed DETER (Defending Elections from Threats by Establishing Redlines) Act as an effective tool against Russia because it provided for automatic penalties against any country suspected of electoral interference.

This uproar in Washington might appear to have only burnished the luster of Putin’s performance. The Russians, after all, achieved much of what they had hoped to. The summit in and of itself marked the symbolic end of the U.S. effort to isolate Russia after its annexation of Crimea in 2014. Meanwhile, the way it was conducted presented Russia as an equal of the United States on the world stage. And the turmoil in Washington underscores the continuing disarray in America foreign policy, in contrast to Putin’s steady course. It is not surprising that Russian Foreign Minister Lavrov lauded the summit as “better than super.”

But it is not that simple. The hard truth is that Russia needs good working relations with the United States for its own purposes, and the Kremlin had wanted the summit to advance that goal.  Russia may be playing a larger role in the Middle East, and it may have made itself indispensable to the resolution of the Syria crisis, but it needs America to validate Russia’s position in Syria, to help raise the vast sums needed for reconstruction, and, more broadly to help manage the dangerous dance between Iran and Israel (and Saudi Arabia). Similarly, in Ukraine, Russia needs the United States to put more pressure on Kyiv to implement the Minsk Agreements. Russia also needs the United States to engage seriously on strategic issues, in part to rein in an accelerating technological arms race, which it cannot afford at this time. Finally, left unspoken, as always, Russia needs the United States as a strategic counterbalance to China.

There was no doubt that the Helsinki summit had set the right course for Russia and advanced both countries’ interest in defusing tensions—until the last thirty minutes of the press conference. Then Trump’s public self-indulgence exacerbated by Putin’s gratuitous support sparked a grave challenge to much of the progress that might have been made during the private discussions. The road to the normalization of relations is a long one; Trump’s outburst and Putin’s reaction unnecessarily made it longer.