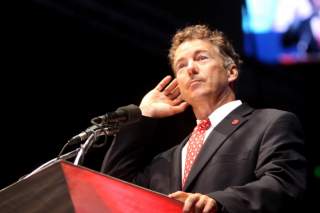 To say that a lot of people across Washington are angry about Sen. Rand Paul’s position on the USA Freedom Act doesn’t do the complaints to his tactics justice.

Whether it’s national security officials in the White House, Director of National Intelligence James Clapper, CIA Director John Brennan, every GOP presidential candidate, the House of Representatives, or the entire Senate Democratic caucus, the vast majority of official Washington is pushing for the Kentucky senator to stop obstructing what so many view as critical national security authorities — that is, the ability of the National Security Agency to preempt terrorist plots by sweeping up mass amounts of telephone communications in the United States in order to make connections about who potential terrorists are contacting and talking too. Senate Majority Leader Mitch McConnell, someone who knows Senate procedure perhaps better than any of his colleagues, was visibly frustrated — if not outright confused — when Rand Paul objected to a one-day extension of the Patriot Act two weekends ago. McConnell’s deputy, Sen. John Cornyn of Texas, summed up the belief among the majority of the Senate best: “Senator Paul is asking for something that nobody will agree to....”

You can call it a fundraising stunt to gather more cash for a presidential campaign, as Sen. John McCain and President Barack Obama suggested in their own comments (when is the last time Obama and McCain agreed on anything?), but Rand Paul is in fact genuine on this issue. He’s railed against the USA Patriot Act throughout his public career. With the help of Edward Snowden’s unauthorized and illegal leaks to the media about the NSA’s activities—including the subject of the current debate, the bulk collection of metadata phone records from Americans across the country—Paul is the loudest privacy advocate in the U.S. Congress.

He cares about the U.S. Constitution and the Bill of Rights to such an extent that he’s spent a combined twenty-three hours on the Senate floor during two filibusters, the first in 2011 against the possibility of a U.S. drone strike on an American citizen and the second on NSA reforms. Rand Paul may be many things to many people in the Republican caucus, but he isn’t a phony on privacy rights and government intrusion.

The question, however, is whether Paul’s principled stand on National Security Agency powers under the Patriot Act is smart politics. If Paul weren’t running to become the next GOP presidential nominee, his tirades against government spying on American citizens would be looked upon as yet another example of his libertarian, don’t-look-at-my-phone predisposition.

Despite numbers pointing to a whopping 58 percent of Republican voters wanting a modification of the Patriot Act, this doesn’t change the fact that Paul is running in a Republican Party that is overwhelmingly hawkish on issues of foreign policy and national security. Virtually every Republican candidate who is currently in the presidential race or is expected to be in the race opposes what Rand Paul is doing with respect to the Patriot Act. Long-shot candidate George Pataki, a former three-term governor of New York, was so bold as to directly accuse Rand Paul of putting the lives of American citizens at risk with his Senate antics. “It's just, to me, totally wrong that a filibuster would be used to create this void in our security at a time when we are at risk,” Pataki said on one of the Sunday shows.

So, why was Rand Paul’s objection over the past several weeks to the USA Freedom Act so politically shortsighted? Easy: because the Freedom Act, passed by a 338-88 margin in the House of Representatives and a 67-32 vote in the Senate after some procedural delays and wrangling, was likely to clear both chambers sooner or later.

While the measure failed to clear the 60-vote threshold the first time the bill came up for a vote, those who voted “nay” were far more inclined to switch to “yea,” during this past Sunday’s cloture vote to bring up the very same bill. Rand Paul’s procedural obstacles this Sunday did nothing but delay the inevitable: forty-eight hours after the Patriot Act expired thanks to Paul’s objections, the Senate cleared the Freedom Act and relegated Paul’s maneuvers to what they were really all about: boosting his presidential campaign nationally on an issue that he’s passionate about. Paul will no doubt be depicted by his Republican rivals as someone who risked shutting down the NSA program for several days just to make a point.

Privacy advocates, libertarians in the mold of Ron Paul, and independent voters will love this. But what Rand Paul has managed to do is expose himself as the punching bag during the 2016 GOP primary debates, where he will be on his own against nine pro-NSA presidential candidates.

I guess this is the definition of being a principlist.