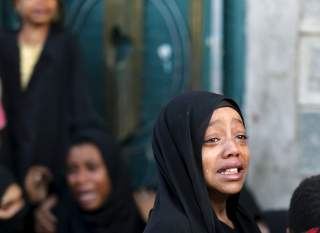 Secretary of State Mike Pompeo’s certification that the Saudi-led military coalition in the Yemen war was taking adequate steps to avoid inflicting civilian casualties may have achieved a new low in U.S. foreign-policy ethics. There is abundant evidence of multiple atrocities that Riyadh and its United Arab Emirates (UAE) junior partner have committed and continue to commit. The coalition’s war strategy has created a famine as well as a cholera epidemic. Attacks on civilian targets are far too numerous to list. An especially appalling incident occurred in August when coalition aircraft attacked a school bus, killing forty children.

Pompeo’s certification was necessary to meet the requirements of a congressional statute. Otherwise, the U.S. military would have had to curtail its refueling of coalition aircraft involved in Yemen military operations. As part of its obsession with countering Iranian influence in the Middle East, Washington has backed the Saudis in their campaign to destroy Yemen’s nominally pro-Iranian Houthi faction. The latest certification preserves the pretense that Saudi and UAE forces are not committing war crimes and that the United States is not a willing accomplice in those war crimes.

The certification requirement for U.S. aid, especially military assistance, is, and usually has been, a cynical farce to neutralize or (at least dampen) potential public outrage at assisting odious regimes. For decades, U.S. administrations have certified compliance with human-rights standards by aid recipients when those recipients have not come even close to meeting that standard.

Just days before his action regarding Saudi Arabia and Yemen, Pompeo issued a certification allowing the release of $1.2 billion in U.S. military assistance to Egypt, despite human-rights concerns that had held up previous funding. As in the case of Saudi Arabia, the dictatorship of Abdel Fatah el-Sisi in Egypt has amassed an atrocious human-rights record. Since taking power in a 2013 military coup, Sisi has executed hundreds of political prisoners and jailed thousands more. Yet except for a brief pause, U.S. military aid, including the sale of F-16 jet fighters and Apache attack helicopters, has continued under both the Obama and Trump administrations.

Brazen executive branch contempt for congressional efforts to restrict U.S. aid to allied regimes guilty of human-rights abuses is not confined to the Middle East. Nor is it a recent phenomenon. In July 2003, for the fifth time in three years, the U.S. State Department certified Colombia’s compliance with statutory human-rights conditions originally contained in Public Law 108-7 (which authorized foreign assistance for fiscal year 2003). As Human Rights Watch reported: “Between 2002 and 2008, members of the Colombian army committed extrajudicial executions or ‘false positives,’ claiming them as combat deaths. Human-rights defenders documented thousands of such executions, taking advantage of an information law to get listings of cases opened by the Prosecutor General’s Office.”

Such atrocities went on for years while U.S. officials blandly certified that the Colombian government met the human-rights standards that Congress had mandated. In 2012, human-rights organizations submitted a list of six hundred killings with the names of victims, dates, locations and more than fifty culpable military units to the State Department. “Six months later, the Department denied U.S. aid to ten of the identified military units,” but approved continued aid to all of the others.

A similar grotesque mismatch between Washington’s human-rights certifications and the realities on the ground characterized the Reagan administration’s Central America policy during the 1980s. Foreign-aid legislation for El Salvador stipulated, as of 1981, that the administration would need to certify semi-annually that the country was worthy of receiving U.S. military aid, and such certifications were duly issued. But the administration’s requests and supplemental requests for military assistance continued to balloon through 1985 when military aid to El Salvador reached $128.25 million.

An even more appalling case involved U.S. aid to Guatemala. A series of military regimes ruled that country after a successful CIA-orchestrated coup against the elected government in 1954. Military forces waged a counter-insurgency war that claimed hundreds of thousands of lives over the next four decades—a campaign of systematic brutality and slaughter that reached its peak during the 1980s. But the Reagan administration routinely certified that the Guatemalan government met basic human-rights standards and U.S. aid could continue to flow. One critic noted: “Sadly, the legislation has not served its purpose.” Indeed, “grievous human-rights violations, attributable to the army, continue to terrorize the Guatemalan people.”

The lament that the legislation had not served its purpose could be applied to most of the certification requirements over the decades. Pompeo has carried on a long and dishonorable tradition. Congress may have intended that the requirement for certifying compliance with human-rights standards by U.S. aid recipients would pressure those regimes to avoid egregious abuses. If that truly was the intent, and not just empty congressional posturing to placate constituents who take human-rights seriously, then clearly that strategy has failed miserably.

Congress needs to make a crucial decision. It either must overrule administrations that issue bogus certifications and continue aiding regimes that commit horrid human-rights abuses, or it needs to stop pretending that it cares about America being an accomplice to such atrocities. If members of Congress intend to get serious about enforcement, the place to start is Yemen. Congress needs to cut off all military assistance to Saudi Arabia and the UAE immediately. Beyond that issue, the legislative branch must insist that certifications accurately reflect reality. Americans have had more than enough toleration of cynical creative fiction from administrations over the decades.

Image: A girl cries after her father was killed by a Saudi-led air strike in Yemen's capital Sanaa July 13, 2015. Saudi-led air raids killed 21 civilians in Yemen's capital Sanaa on Monday morning, relatives of the victims and medics told Reuters, two days after the start of a United Nations-brokered humanitarian truce that Riyadh does not recognise. REUTERS/Khaled Abdullah