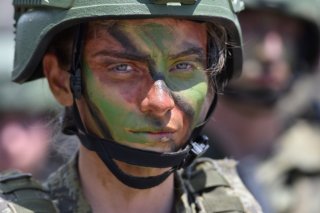 If credit should be given where credit is due, then one thing has to be admitted—when it comes to choosing Balkan clients, Washington sure knows how to pick them.

Consider the track record over the past three decades. In Montenegro, Washington’s longtime favorite, Milo Djukanovic, who has been president or prime minister of the country for some thirty years, was named “2015 Person of the Year in Organized Crime and Corruption” by an international anti-corruption watchdog organization, beating out the likes of Vladimir Putin and Ilhan Aliyev for the title.

In Kosovo, another Washington darling for the past twenty-five years, Hashim Thaci, was indicted last year for war crimes and crimes against humanity, as well as being widely suspected of involvement in drug trafficking and the white slave trade. A witness in his ongoing trial was recently found dead outside of Pristina.

The kicker, however, has to go to one of our “allies” in Bosnia and Herzegovina. In February 1996, NATO troops raided an Iranian-run terrorist training camp in central Bosnia where they found blueprints for NATO bases in the country, plans to assassinate political opponents and instructions on how to make booby-trapped children’s toys. Today, the commander of the group arrested at the terror camp, Sefik Dzaferovic, is a member of Bosnia’s presidency.

How and why Washington has consistently supported some of the most reprehensible figures in the Balkans is a complicated story. But it is in no small measure a consequence of the fact that the United States has never had a serious debate about why, if at all, the Balkans are important for the United States.

From a realist perspective, the region should be of little interest to the United States. None of the countries in southeastern Europe have nuclear weapons; none are a military threat to the United States; none of these countries have oil, and waves of Balkan refugees are not going to come streaming over U.S. borders. The region is irrelevant to the U.S. economy; in 2020, U.S. trade with all of the Western Balkans (Albania, Bosnia and Herzegovina, Croatia, Kosovo, Montenegro, Northern Macedonia, Serbia) was less than one-tenth of 1 percent of total U.S. foreign trade.

Historically, statesmen and diplomats have recognized that the Western Balkans, in and of themselves, are of little strategic importance. (The one exception to this is Serbia, which sits astride the major land and riparian transportation corridors between western Europe and the Middle East.) Napoleon chastised one of his generals for getting too involved in the incessant border raids between Ottoman-controlled Bosnia and French-controlled Krajina, telling him that “French blood is too precious to be shed for such trifles.” Bismarck, for his part, famously noted that the Balkans were not worth the bones of a single Pomeranian grenadier.

Winston Churchill similarly had little interest in internal Balkan developments. While Churchill was keen during World War II to have local resistance forces divert as many Axis troops as possible, he showed scant concern for what would happen in the region afterward. In a famous exchange with his personal emissary to Tito’s communist Partisan movement, the legendary Fitzroy Maclean, Churchill asked “Do you intend to make Jugoslavia your home after the war?” to which Maclean replied, “No, Sir.” Churchill thereupon noted, “Neither do I. And that being so, the less you and I worry about the form of Government they set up, the better. That is for them to decide.”

Throughout the Cold War, American policymakers were guided by many of the same sentiments that had guided these earlier generations of diplomats and statesmen. After 1945 Yugoslavia in and of itself was not considered strategically important; rather, the western Balkan country was useful only insofar as it prevented the Soviets from gaining access to the Adriatic, and because of the demonstration effect it provided of a communist country that was nevertheless independent of the Soviet Union. In other words, Yugoslavia was important to U.S. foreign policy because of the Soviet Union, not because of its own intrinsic strategic significance. As one post-mortem on the failure of Washington policymakers to respond to the Yugoslav crisis put it, “Yugoslavia’s internal developments and prognosis for stability were consistently interpreted in light of the Cold War threat rather than the prospects for sustaining a viable state for its own purposes.”

Not surprisingly, therefore, it is hard to find a substantive, systematic statement on why the Western Balkans matter to U.S. interests. For instance, a twenty-page Special National Intelligence Estimate on post-Tito Yugoslavia (SNIE 15-83, produced in January 1983) provided only one sentence as to why Yugoslavia was important to the West (“Yugoslavia’s strategic importance rests on its status as an independent state capable of facilitating or impeding Soviet access to the Adriatic or the Mediterranean.”)

The inability to discern major U.S. interests in the Western Balkans continued as communism collapsed across East-Central Europe and the Soviet Union. In June 1991, for instance, U.S. Secretary of State James Baker claimed that the United States had “no dog in the fight” between the Yugoslav republics, and in the following year both President George H. W. Bush and the Chairman of the Joint Chiefs of Staff, Colin Powell, stated that they could find no major U.S. strategic interest in the Balkans.

Other members of Bush’s foreign policy team saw things in much the same way. Dick Cheney, at the time serving as defense secretary, noted that “It was my judgment at the time, and frankly still is today, that [the Western Balkans] was not a strategically vital part of the world for the United States to put at risk or to pay the price that would be involved for us to go in and intervene militarily in that conflict.”

Apart from not seeing any U.S. interests in the region, the Bush foreign policy team, composed of many old Yugoslav hands, could also see little that the United States could realistically do to ameliorate the situation. According to former CIA director Robert Gates,

You had three people in the administration who were very familiar with Yugoslavia and the history of the south Slavs. [Deputy Secretary of State Lawrence] Eagleburger had been ambassador to Yugoslavia, [National Security Advisor Brent] Scowcroft had been Air Force attache in Belgrade [while George Kennan had been ambassador], and I had done my Master’s work on Eastern Europe, especially the south Slavs and all three of us had studied Serbo-Croatian. We saw the historical roots of this conflict and the near nonexistent potential for solving it, for us fixing it.

While on a rhetorical level the Clinton administration ascribed more importance to southeastern Europe, in actual policy terms it viewed the region in much the same way the Bush administration had, and, indeed, in much the same way Napoleon and Bismarck had before them. The Clinton administration’s disconnect between rhetoric and actual policy could be seen in the confusion and mixed messages often sent out by administration officials regarding the Balkans. Thus, whereas in May 1993 President Clinton claimed that the United States had “fundamental interests” at stake in Bosnia because the violation of internationally recognized borders and ethnic cleansing could not be tolerated, just one month later, in June 1993 his own secretary of state, Warren Christopher, would say that the United States’ “vital interests are not sufficiently involved” in the war in Bosnia.

Moreover, throughout the 1990s it was clear that U.S. policy towards the Balkans was driven less by the actual facts on the ground in the region than by higher-level geopolitical chess games, and the concern about how U.S. Balkan policy could affect American interests in other parts of the world—or, for that matter, Bill Clinton’s re-election chances in 1996. For instance, a policy options paper produced by the National Security Council in 1995 listed “core U.S. interests” in southeastern Europe as “maintaining our strategic relationship with key Allies,” “protecting the credibility of NATO,” “avoiding a conflict with Russia,” “preventing spillover,” and “ensuring that the use of force to change borders and acts of genocide do not become legitimate forms of behavior in post—Cold War Europe.” As the Balkans scholar Steven Burg has noted, “None of these core interests concerned Bosnia or even the post-Yugoslav region itself.”

Remarkably, even after a decade of intensive U.S. involvement in southeastern Europe, by the end of the 1990s U.S. policymakers still did not seem to have any better idea of what vital U.S. national interests had been served by the interventions in Bosnia and Kosovo. A congressional hearing in August 1999 explicitly entitled What Are U.S. Interests and the Goals of U.S. Engagement? did not produce a single sentence defining U.S. interests in the region.

In a tragic irony, however, the 1990s did represent the one time in which Balkan developments did in fact affect American security and vital national interests, but because of the intellectual and ideological confusion characteristic of Washington’s approach to the region, the national security apparatus completely failed to recognize it. The result was the greatest U.S. intelligence failure since Pearl Harbor.