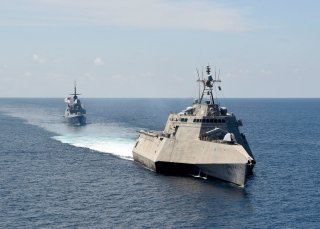 A hundred years ago, Washington was the setting for a major international conference called to arrest an emerging competition in naval weaponry and to settle outstanding disputes threatening the peace of Asia. The Washington Conference began with high drama on Saturday, November 12, 1921. President Warren G. Harding opened the negotiations at Memorial Continental Hall near the White House with a welcome address to the conference delegates and the large audience of onlookers that included members of Congress, the well-connected Washington elite, and journalists from around the world. His short, solemn speech called for an end to the competition underway in naval armaments. The celebrated author H.G. Wells, who covered the conference as a journalist, wrote that the president “is a very big, fine-looking man and his voice is a wonderful instrument.” The American public, Wells told his readers, viewed Harding as “a sincerely modest man, determined to do the best that is in him and at once appalled and inspired by the world situation in which he finds himself among the most prominent figures.” In his opening speech, Harding declared that the United States, “Our hundred millions frankly want less of armament and none of war.” The president’s remarks received loud applause from the audience, with William Jennings Bryan, three times a candidate for president and former secretary of state, leading the cheering from the gallery.

After the president delivered his speech, he left the conference hall, and the American Secretary of State Charles Evan Hughes took center stage in leading the opening session. What happened next came as a surprise. Instead of a speech of welcome and pious generalities, Hughes’s speech stunned the other conference delegates and captured the attention of public opinion around the world by presenting a detailed arms control proposal. He called for an immediate stop to the competition in the building of the latest generation of capital ships—that is, the most powerfully armed, large surface warships. His proposal spelled out the names of the ships whose construction would be stopped and of older battleships to be scrapped. The secretary of state demanded: “Preparation for offensive naval war will stop now.”

America’s surprise diplomatic salvo took the delegates by surprise and gave Hughes the initiative in negotiations. Arthur Balfour, the head of the British delegation, called the American proposals “bold and statesmanlike.” The American initiative spurred the negotiators to achieve what had seemed impossible: an arms control agreement to curtail the naval construction planned or underway by Great Britain, Japan, and the United States. To a war-weary world, suffering from a sharp postwar economic downturn and feeling the aftershocks of the global flu pandemic, the agreement hammered out in Washington heralded a triumph of diplomacy and enlightened statecraft.

“Incomparably the Greatest Navy in the World”

This outcome of the Washington Conference was hardly inevitable. Going into the conference, a three-sided arms race in capital ships, involving Great Britain, Japan, and the United States, threatened a return to great power competition soon after the conclusion of the First World War. The war transformed international relations. For the United States, the fighting showed that, in a dangerous world of clashing great powers, an effective foreign policy demanded an increase in the armed forces. To prepare for this new age of heightened dangers, President Woodrow Wilson called for a huge buildup of American naval power, to acquire (in his words) “incomparably the greatest navy in the world.” At the center of the American naval buildup was a new generation of capital ships, more powerful than any that existed in the world’s navies.

Despite the end of the fighting, Wilson refused to curtail the American naval buildup. Quite the reverse, the president continued to advocate a large buildup of American naval power, including new capital ships. To Wilson, the United States faced a stark choice in the postwar world: either join the League of Nations or live in a harsh world of escalating great power competition that would lead to another war. The alternative to joining the League of Nations was an American national security state. In Wilson’s view, an America that withdrew into isolation, showing restraint in providing security commitments to other countries, would need to arm itself in preparation for a return to great power competition and the violent breakdown of international order. Only when the United States and the other great powers joined the League would it be possible to reduce armaments. Wilson thus insisted on building up the navy so long as the United States did not join the League, and the naval buildup conceived as a wartime contingency continued despite the war’s end.

Nor did the change of administrations in the United States, with the election of Harding as president, result in a reduction in the naval buildup. As a candidate, president-elect, and during his first hundred days in office, Harding advocated completing the American warship construction plan put in place by his predecessor. In December 1920, upon returning from a Caribbean vacation, the sun-tanned President-elect called for “a big navy and a big merchant marine.” In Harding’s view, the United States “must be a maritime people, since no nation has ever written a complete page in history that has not taken a prominent place in maritime affairs. ... The navy is the first line of American defense. No nation can hope to be eminent in commerce in these times without a naval institution adequate to protect those rights.” The future economic well-being of the United States as a rising trading state and financial center appeared intertwined with its rise as a naval power.

Once in office, Harding found that his naval ambitions faced considerable domestic political opposition. Within Congress and across the country, voices emerged against continuing the wartime buildup of the navy. The progressive maverick Republican Senator William Borah of Idaho led the opposition in Congress. Today, Borah is best known for his staunch resistance to Woodrow Wilson’s campaign to obtain Senate ratification of the Versailles Treaty and American entry into the League of Nations. Borah refused to accept Wilson’s view that rejection of the League entailed an increase in armaments. He wanted to show that the opposite was the case. He introduced a Congressional resolution calling on the president to invite Britain and Japan to a conference that “shall be charged with the duty of promptly entering into an understanding or agreement by which the naval expenditures and building programs ... shall be substantially reduced.” His resolution captured the public’s mood, and Congress acknowledged popular opinion by voting overwhelmingly to adopt it. The action of the Congress forced Harding’s hand, and invitations were duly sent to attend a conference in Washington to negotiate limits on naval construction.

In preparations for the conference, Harding sought a diplomatic plan of action to disarm domestic political critics as well foreign governments. The president made clear the connection between internal and external politics to the team of policymakers drawing up the American negotiating proposal. The powerful head of the Senate foreign relations committee, Henry Cabot Lodge, dined with the president at the White House, where the discussion revolved around the upcoming arms control conference. Lodge found that President Harding felt “very strongly about having our six battle cruisers built.” But the President “also felt the great necessity ... of making some offer at the very outset as to a general limitation of armaments which would satisfy the desires of the country and put the question straight to the other Powers.” Lodge did “not for a moment believe that either Japan or England will accept it [the American proposal], but if they do not accept it we shall have made our position clear and will lay the responsibility [for failure] where it will belong,—with them.” A month before the opening the conference, Harding was even blunter in an off-the-record interview with a friendly journalist: “We’ll talk sweetly and patiently to them [the other major naval powers] at first; but if they don’t agree then we’ll say ‘God damn you, if it’s a race, then the United States is going to go to it.’” The United States—the country that could best afford an arms race—would call for a stop in the competition. Possessing the world’s strongest economy, the United States held the whip hand in the naval competition. If Britain and Japan refused to settle, the president would regain the initiative in domestic politics to push the naval buildup through Congress.

Harding entrusted to Secretary of State Hughes the lead in devising an ambitious arms control plan. The President’s trust was not misplaced. Before becoming secretary of state, Hughes had a distinguished career of public service. He worked as a successful lawyer in New York before being elected the state’s governor, served as an associate justice on the Supreme Court, and stood as the Republican party’s candidate for President in 1916, losing in a close race to Woodrow Wilson. Hughes dedicated himself to the task of working up the American negotiating position and refused to let the effort get derailed by opposition from within the government. Behind Hughes stood the authority of the President. Working with a small group of trusted and experienced advisors, Hughes kept secret the American plan that he would unveil at the conference’s opening. Hughes’ work paid off in achieving Harding’s intent of gaining the diplomatic initiative for the United States in the negotiations.