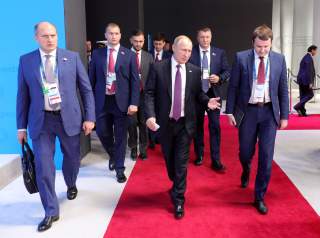 Washington’s December announcement of a Syria pullout came as a surprise to many in Moscow. Although the Kremlin’s Middle East strategy had been undergoing a shift before the decision was known, the new paradigm might come as a litmus test for its strategy, hence deserving greater international scrutiny.

Given that President Vladimir Putin has declared victory and withdrawal from Syria on a few occasions, but never really kept his word, Russian officials struggle to grasp that Washington’s snap decision could actually take place. According to Maxim Suchkov, many in Moscow believe that Washington would still operate via CIA operatives, as well as using its facilities in Jordan and Iraq. In effect, the Kremlin will wait before it decides to adapt its own multilayered strategy.

Moscow is determined to further pursue and capitalize on its own initiatives and adjust in accordance with the geopolitical settings.

Moving forward, the Astana framework will likely gain an even greater importance. Although questioned from the beginning, the format miraculously withstood most of the challenges and has been designated to further serve as a platform where Russia, Iran and Turkey could discuss their disagreements. It might, however, face an endurance test from multiple economic and geopolitical hurdles, as the trio starts to rival each other more.

Despite benefiting from high levels of cooperation, Russia and Iran remain watchful. The Kremlin is tacitly concerned about the Iranian government seeking to promote its Khomeinist ideology and potentially creating a time bomb by reshaping sectarian demographics in favor of Shia Muslims. Moscow is also preoccupied with Iran’s anti-Israeli buildup spearheaded by Hezbollah and its pretext for exercising control over large swathes of territories: from Tehran to the Mediterranean.

With few doubting the current regime persisting with or without Bashar al-Assad in charge, Tehran is destined to exercise an even stronger grip over Damascus. In contrast, military cooperation with Moscow might be replaced with competition for influence. Thus, the Kremlin’s tactics would be defined by its capacity to avoid such confrontations and further utilize its high-level diplomacy for geopolitical stability.

Although Russian-Iranian hurdles are rather speculative, the situation with Turkey is more straightforward. Trump reportedly “handed over” Syria to Erdogan and Ankara now seeking to extend its outreach and assert control over certain areas. While having its hands tied by obligations to Washington and likely unwilling to start another military operation in northern Syria, Turkey is still eager to launch a more aggressive campaign against YPG and PYD. The latter appear as extremely vulnerable with the United States leaving.

Neither Moscow, nor other regional players such as Egypt or the UAE, are interested in witnessing expanding Turkish influence. The Kremlin, however, is the only force on the ground that is capable of containing Erdogan’s ambitions by trading its political capital and blunt hard power.

Russia wants the regime to regain control over northern Syria and resolve the issue of Idlib, which remains the last stronghold of the opposition. Moscow would likely include the YPG as a part of a “quid pro quo” deal on the rebel-held province, while also working on enhancing direct communications between Ankara and Damascus.

Although Russia will at some point receive a carte-blanche for an operation in Idlib, the evolving scenario shouldn’t hurt Turkey’s security interests or Erdogan’s domestic standing in the run-up to March 31 elections.

Overall, Russia’s diplomatic goals would be centered on the launch of the constitutional committee, the pursuit of funds to rebuild the country and struggle with greasing the wheels for the return of refugees. The Kremlin would do everything possible to avoid possible disruptions while striving to establish effective communications with the new UN envoy for Syria, Geir Pedersen.

The decision to launch the constitutional committee would require expanding outreach to more opposition groups and local councils. With Moscow speaking from a position of even greater power, more groups might be eager to return to the negotiating table. The latter could become another asset for relegitimizing the regime in Damascus.

Moscow is concerned about foreign funding potentially threatening its regional stance in Syria, but realizes the need to spearhead reconstruction. High levels of poverty, accompanied by massive destruction, create a fertile ground for Islamic extremism, making all sides stand to lose.

The pursuit of funds, however, could be a difficult task to manage. A UN agency estimates the war has cost Syria $388 billion and Moscow’s meager economy has little to offer. All eyes are then directed towards the oil-rich monarchies of the Persian Gulf.

Although marked by controversies, Russia acknowledges the Arab nations’ quest to secure their position in the new regional geopolitical dynamic. Washington’s exit means that the Saudi-led coalition is now left to contend with an expanding Iran that continues to solidify its grip over regimes in Iraq and Syria, and a number of proxy conflicts from Yemen to Lebanon. Moscow sees this as a chance to project diplomatic efforts and adjust its regional strategy to reach out to all parties.

Moscow believes that the Arab states could influence a number of opposition fractions across Syria, which might mark the emergence of the new pattern of cooperation. Earlier, the UAE and Bahrain already announced the reopening of diplomatic missions in Damascus with more Arab countries likely to follow.

The Gulf Cooperation Council nations acknowledge that Assad is too dependent on Tehran to start distancing from it; hence, the Kremlin could emerge as a stable channel of communications. Unlike Iran, Russia is perceived as a stabilizing force that could be receptive to the concerns of the Saudi-led coalition.

Projecting the effects of the Syrian campaign beyond the Middle East is the goal that the Kremlin has been nurturing from the beginning. The conflict was always perceived as a tool to showcase ambitions that assert Russia as a global power. With Trump abandoning Syria, Moscow perceives it as a victory that adds greatly to its political capital. The latter could allow reaching out to European partners, such as France, Germany, as well as the European Union as a political actor, by persuading them to embrace its own version of a political settlement.

Finally, Russia is using Syria as a base for altering its long-term regional strategy. Moscow remains vigilant about possible reemergence of radical non-state actors such as ISIS, but also envisions changing its own hardline approach towards a rather opportunist one. Once again, the Kremlin wants to assert itself as an impartial broker. Moscow wants other nations to perceive it as a power capable of equally hedging opportunities, whether in the fields of energy, arms sales or agricultural exports, as well as maintaining a geopolitical and security balance with all parties.

Dmitriy Frolovskiy is a political analyst. He is a consultant on policy and strategy in the Middle East and Central Asia with private entities, and he has written about Russia’s foreign policy toward the Gulf Cooperation Council states and former Soviet territories.