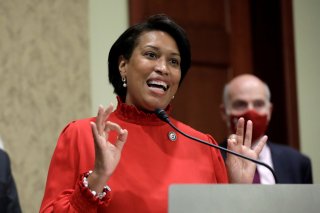 Here we go again. At the behest of Washington, DC mayor Muriel Bowser, an official city committee called “DCFACES” has issued a twenty-four-page report. DCFACES turns out to stand for District of Columbia Facilities and Commemorative Expressions Working Group. Its recommendations could hardly be more sweeping—banish Benjamin Franklin, Alexander Graham Bell, Christopher Columbus, Thomas Jefferson and a host of other worthies from the nation’s capital as irredeemably racist. Nor are buildings and monuments exempt. Woodrow Wilson public high school is on the chopping block. So is the Washington Monument.

“We believe strongly that all District of Columbia owned public spaces, facilities and commemorative works should only honor those individuals who exemplified those values such as equity, opportunity and diversity that DC residents hold dear,” wrote Bowser advisor Beverly Perry and public library director Richard Reyes-Gavilan.

Dear me. How did they arrive at these crackpot conclusions? A look at the report is quite illuminating. DCFACES consisted of working group members and committee staff who worked on engagement, policy, and research. They gussied up their report with all kinds of charts, graphs, and polls. Here is the kind of leading question that they asked survey respondents: “Should the District make changes to public spaces or commemorative works that do not align with the District’s core values?” Not surprisingly, 63 percent agreed strongly with another 18 percent agreeing. This of course elides the question of who—or what—gets to define those values. But not for long. Further down in the report, we learn that “priority should be placed on ensuring future assets, especially and including those recommended for renaming by this Working Group, include more women people of color and LGBTQ Washingtonians.”

The question that the document raises isn’t simply about historical justice but also a pragmatic one. How would anyone find their way around the city if its recommendations were fully implemented? An entire section of the report is devoted to the prospect, under the rubric of “naming policies and authority by asset type,” to renaming recreation centers, parks and fields, schools, libraries—even streets and alleys are not exempt. 78 streets are listed as being named after “persons of concern.” Bridges seem to be OK, with only two singled out for renaming. Eleven recreation centers are apparently in bad odor. No less than nineteen schools are as well.

The executive summary suggests appointing a District of Columbia state historian to oversee recommendations. A serious historian could indeed address the legacy of racism in Washington, where slaves built the White House and slave trading took place in open markets, to the astonishment of foreign observers who were aghast at the contradiction between America’s ideals and its practices, as Tom Lewis records in his superb history of the city. There can be no denying that plenty can be done to illuminate the tenebrous parts of Washington’s past. But this working group offers little confidence that it constitutes anything other than a bunch of zealots out to tar America itself as ineradicably and permanently guilty.

In rushing to expunge the founders of America, they are engaging in historical revisionism that offers a cartoon portrait of complex figures such as Jefferson, Washington, and Franklin. They set in motion a global revolution that has led to the spread of freedom around the world. To treat them as pariahs does violence to America itself. Woodrow Wilson, a staunch racist, left behind a legacy that cannot simply be dismissed but led to progressive reforms at home and the expansion of freedom abroad. It’s surprising that the working group did not recommend the extrusion of the memorial on the national mall to Franklin D. Roosevelt, who, after all, failed to desegregate the military. All he did was win World War II.

The report, steeped in liberal self-congratulation and smugness and officiousness, indicts itself. It will do nothing to end or even ameliorate racism. Quite the contrary. In seeking to efface the past, it will merely inflame perceptions of the present. Congratulations, Mayor Bowser.