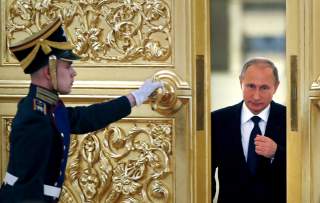 U.S.-Russia relations are in a perilous state. Any wisp of hope coming from Donald Trump’s “summit” with President Vladimir Putin at the G-20 was dispelled by breaking news on potential collusion between the Trump campaign and Russia, this time implicating Donald Trump Jr., among others. William Perry, a former secretary of defense under Bill Clinton, terms the situation “worse than the Cold War.” Sober realism about U.S. policy towards Russia has seldom been more imperative and less evident. Instead of the characteristically hyperbolic “fantastic relationship” Trump anticipated with Russia, or the “fundamentally adversarial” relationship that Obama’s National Security Council deemed inevitable, we need clear thinking on how to rebuild a viable détente with this nuclear power.

On January 26 of this year, the Bulletin of the Atomic Scientists reset the Doomsday Clock from 11:57 to 11:58:30 (midnight represents nuclear apocalypse). The Bulletin considers these days more dangerous than the Cuban Missile Crisis, and for good reason. The new cold war between Russia and the United States is punctuated by perilous military face-offs in three arenas: in Syria; in the skies over the Baltic Sea, on Russia’s western border with three hundred thousand NATO troops on high alert and both Russia and NATO ramping up deployments and exercises; and in Ukraine.

The rising tensions express totally contradictory perspectives. In the United States, across the political spectrum, Putin is seen as a merciless autocrat with expansionist designs. He’s denounced for aggression in Georgia and Ukraine, and for propping up a brutal dictator in Syria. Investigations on Russian interference in the 2016 U.S. presidential election—and possible collusion with the Trump campaign—have generated a continuing media frenzy that poisons any discussion.

In Russia, the United States is seen as the aggressor, asserting itself as the global unipower. When Bill Clinton trampled upon repeated promises and began expanding NATO towards the Russian border, George F. Kennan, the architect of containment, warned of a “tragic mistake.” NATO expansion helped convince Russians that the West regards it as a permanent enemy. The U.S. Defense Intelligence Agency recently reported that the Kremlin apparently believes the United States seeks regime change in Russia.

In fact, each perspective holds more than a grain of truth. Putin does want to reassert Russia’s influence on the international stage, and challenge what he sees as America’s unipolar delusion. The United States has seen itself as the global arbiter, the “indispensable nation,” dismissing the legitimacy of any other nation’s sphere of influence. The Pentagon does designate Russia as its leading adversary. The United States has encouraged the “color revolutions” in Georgia and the coup in Ukraine. Both countries have mucked about in the others’ internal and electoral politics.

Despite all this, two countries possessing over 90 percent of the world’s nuclear weapons urgently need a working relationship. A working détente requires persistent efforts to find areas of agreement and to settle disputes, rather than a willingness to freeze relations, deepen sanctions and escalate military posturing.

The first priority for the United States should be reengaging Russia in efforts to reduce nuclear arsenals, and to deny terrorists access to nuclear materials. They should be working together—as they did in the P5+1 negotiations over Iranian nuclear-weapons capacity—to stop the spread of nuclear weapons.

The United States and Russia also have a shared concern about the terrorist threat posed by ISIS, Al Qaeda and their offshoots. In Syria, cooperation with Russia may be the only way to stabilize the nation so it can eventually recover from its horrific war. The United States has no intention of committing the troops and resources needed to overthrow Syria’s president, Bashar al-Assad. Washington would do well to increase cooperation with Russia in the war against ISIS, and seek joint guarantees of a cease-fire that gives the Syrian people a respite from six years of brutal warfare, and begins to slow the refugee flows destabilizing Europe.

At the end of the Cold War, the United States and Russia could have joined in building and strengthening a zone of peace in Europe. Instead, the United States expanded NATO right up to Russia’s border. That expansion will be virtually impossible to undo, but the United States and Russia could reverse the buildup of troops and stand down the military exercises on both sides of the Russian border without any formal agreement. An agreement guaranteeing Georgia and Ukraine’s independence, committing them to remain nonaligned, outside of NATO and free to join both the EU and the Russian economic bloc, would greatly reduce tensions. Russia and the United States might join in pushing for the full implementation of the Minsk II Accords, providing for an end to violence and greater autonomy for eastern Ukraine. Sanctions relief might be combined with an agreement for an internationally monitored referendum on Crimea’s status, under the UN’s auspices.

Russian interference into U.S. elections requires independent investigation. The special counsel should be complemented by an independent commission authorized to look at what is known, and report publicly. The United States should strengthen its election systems to counter outside interference, and work with other nations to devise “rules of the road” on hacking and cyber dangers, particularly those related to interference in strategic warning systems and nuclear command and control.

Today, the focus on Russian interference is fed by fierce resistance to the depredations of Donald Trump. That enables ideologues and entrenched interests to fan a neo-McCarthyism that scorches anyone calling for better relations. As editor of the Nation, a magazine with a long history of adopting alternative views and unpopular stances on foreign policy (that were later viewed as common sense), I understand the importance of challenging the conventional orthodoxy. I am also acutely aware of how difficult it has become in today’s toxic media and political environment to argue that the United States and Russia should work together on areas of common interest. Rebuilding a working détente with Russia will require skill, persistence and real courage. With Trump demonstrating that he has neither the temperament nor the capacity to sustain a coherent, balanced policy initiative, it is hard to see how we get there from here.

Katrina vanden Heuvel is editor and publisher of the Nation.

Image: An honor guard opens the door as Russian President Vladimir Putin (R) enters a hall to attend a meeting with members of the Presidential Council for Civil Society and Human Rights at the Kremlin in Moscow, Russia, October 1, 2015. REUTERS/Yuri Kochetkov/Pool ​