Washington Is Now a Three-Party Town 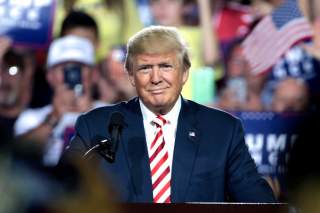 The two American presidents most alike Donald Trump are Andrew Jackson and Theodore Roosevelt (nationalism, hostility towards concentrations of power—that last one is more apt than you think). Yet if you’re looking for similarities to President Trump’s maiden speech on Friday, you’ll comb through Jackson’s and Roosevelt’s inaugural addresses in vain. Jackson’s are surprisingly delicate statements of political theory, including a pledge to “keep steadily in view the limitations as well as the extent of the Executive power.” Roosevelt’s are more sweeping, but still humble, with a focus on Americans’ “duties to others and duties to ourselves.”

Trump’s inaugural address, in contrast, was replete with litanies of what government owes its people, almost all of which it’s been failing to provide. At first, the speech sounded like it might be Reaganesque: “For too long,” Trump began, “a small group in our nation’s capital has reaped the rewards of government while the people have borne the costs.” Cut to Dick Cheney in his ubiquitous cowboy hat sitting next to Hillary Clinton, charter members of that aforementioned small group. Presidential inaugurations are a weird American blend of political aristocracy, martial mystique, and soapbox speechifying; Trump’s was, too, though with more of the third element than usual.

Alas, the speech quickly took a dark turn, albeit with some artful flourishes. Our economy, according to Trump, is plagued by “rusted-out factories scattered like tombstones across the landscape of our nation.” Crime and gang violence constitute “American carnage.” The United States was painted not in the bright hues visible from a top-dollar townhouse in Friendship Heights, but the drab grays that our newest president sees smudged across the heartland. Trump was bleak, though not nearly as bleak as during his jeremiad at the Republican National Convention. He was also hopeful, with the usual promise of salvation provided he’s allowed to exercise untrammeled power.

This was an unconservative speech—it barely drew upon America’s heritage and never recognized the limits of government. It was an illiberal speech, in that there were few paeans to human rights or the supposed post-war global order. It was distinctly non-progressive, at least as far as obsessive identity politics are concerned, and it certainly wasn’t socialist or libertarian. It contained none of the ideologies that traditionally animate the Republican and Democratic parties. Already, news anchors are bristling over what they’re calling a “new isolationism,” meaning Trump’s insistence that America won’t seek to impose its values on others and will prioritize its own interests. How bizarre that such a reasonable proposition sounds so alien to our commentariat.

But it does and it functioned as a signal: in spite of that negligible little “R” after Trump’s name, Washington is now a three-party town. America’s forty-fifth president views himself as both an embodiment of the national mood and a wrecking ball aimed at the political class, the former of which is incompatible with Republican views on limited government and the latter of which is a repudiation of Democratic faith in technocracy. Trump’s political machinery is distinct, too, not the DNC or the RNC, but the Trump Organization.

Right now, Trump has more in common with the GOP than the Democrats, with whom he shares some policy goals. Still, when Trump declared, “We will build new roads and highways and bridges and airports and tunnels and…” I hoped he would keep going—“…segues and monorails and space stations…”—so the cameraman would eventually get bored and cut away to Paul Ryan. How strained that countenance must have been. Ryan and Trump may get along at first but eventually conscientious libertarianism seems destined to clash with “America first” (the president didn’t shy away from using that slogan). Two parties are nowhere near enough to contain such a vast pantheon of political thought. Expect fissures, and soon.

Matt Purple is the Deputy Editor for Rare Politics. Prior to Rare, he was the assistant managing editor of the American Spectator.