Washington Should See Imran Khan as a Partner, Not an Adversary 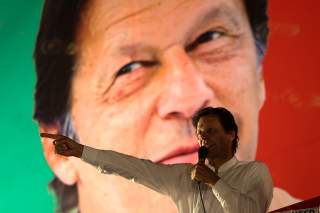 With a thin margin in the National Assembly, ex-cricketer and philanthropist Imran Khan will be Pakistan’s next prime minister. International press coverage of Khan has been critical, and to some extent, deservedly so, given his divisive campaign.

But Khan has largely been caricatured—wrongly depicted as an unpredictable anti-American, pro-Taliban religious extremist who raises the risk of nuclear conflict in the region. Bizarrely, some in Washington have even suggested that Khan is influenced by socialism.

In getting Khan wrong, we miss an opportunity to leverage shared goals and build a long-term relationship with Pakistan—a pivotal country in South Asia and the broader Muslim world.

Khan has indeed positioned himself as a critic of both the American-led war on terror and Pakistan's political establishment. But endemic poverty and violence in Pakistan prove that his inclinations against endless war and rampant corruption are appropriate. To a large degree, Khan’s “populism” is just common sense.

America is safer than it’s ever been since 9/11. But the wars in Afghanistan, Iraq and Yemen have yielded irreparably broken societies.

Pakistani politicians take kickbacks and pilfer state funds, using the proceeds to invest in property and businesses in Dubai and London. But their country, as Khan bemoaned in his victory speech, has twenty-five million out-of-school children and a large population of undernourished kids with stunted growth. Khan is no empty Trumpian firebrand. He used his cricket fame to build his country’s first network of cancer hospitals after his mother succumbed to the disease.

Khan’s personal views on the Taliban insurgencies in Afghanistan and Pakistan are simplistic. He long decried the war in Pakistan’s frontier regions as America’s war, even as terrorists ravaged Pakistani cities, murdering thousands of civilians. And he seems to view negotiations as a magic wand that can quickly resolve war.

But as Khan comes to power, the debates on whether this is Pakistan’s war and the value of talks versus military force have largely been settled. The Pakistan Army ultimately embraced its war within and has cleared most of the tribal areas of anti-state jihadists. Pakistani counterinsurgency operations are now somewhere in between the hold and build stages. On the Pakistani side of the border, the war Khan opposed has been fought and essentially won. His task now is to build a responsive governance system in the tribal districts near Afghanistan.

The American-led war on the other side of the border is faring terribly. But even with the rise of Khan, Afghanistan is more likely than before to serve as a flashpoint between Islamabad and Washington as U.S. policy moves closer toward an embrace of the ex-cricketer’s call for a negotiated settlement.

While Khan is inexperienced on foreign policy, the Pakistan Army and diplomatic corps, which have much more developed views on a durable resolution to the conflict in Afghanistan, and will certainly educate the incoming prime minister and shape future policy.

Beyond the issue of Afghanistan, there is indication that Pakistan under Khan can remain a partner of the United States.

Khan has spoken of a bilateral relationship on the basis of mutual respect. And while he has not held executive office in the country, his party’s five-year rule over the Khyber Pakhtunkhwa province near Afghanistan offers a preview of how it may engage with the United States while ruling at the center.

Khan’s party, the Pakistan Tehreek-e Insaf (PTI), has allowed the U.S. supply route to Afghanistan to continue and its criticism of the U.S. drone campaign has been measured—no doubt aided by the fact that such attacks are now rare. This does not mean Khan’s condemnations are empty like those of his predecessors, but it does mean that he understands the complexities of diplomacy and is unlikely to act impulsively.

Furthermore, despite Khan’s criticism of Washington, the U.S. Agency for International Development (USAID) remains an important partner for the Khyber Pakhtunkhwa government run by PTI. USAID was the single-largest foreign donor to the province in the 2017–18 financial year. In Khyber Pakhtunkhwa and the tribal areas border Afghanistan, USAID has financed the improvement of electric power generation and distribution, the construction of roads and tunnels integrating these regions with Afghanistan and the rest of Pakistan, and the rehabilitation of persons displaced by anti-insurgent operations. The results of these projects have been mixed—but they do indicate that there’s space for a modest but focused aid campaign to continue.

For Pakistan observers in Washington, the glass is always half empty. To be clear, there are some reasons for concern. Democratic and civic freedoms have regressed in Pakistan—as they have in Bangladesh, India, and elsewhere in the region. Khan will come to power with a narrow majority and may remain vulnerable to a vote of no confidence. Politics may sap time meant for improving governance. And the country’s macroeconomic situation remains tenuous with an impending currency crisis, due to a massive current account deficit.

But there have been real, measurable gains in Pakistan the past five years.

Its economy is growing—at of 5.7 percent this past fiscal year. Massive new shopping malls are filled with consumers. Locally-assembled cars clog the streets. And new auto manufacturers are entering the growing market.

Most importantly, Pakistan is no longer the world’s most dangerous country. Pakistan has essentially defeated its own Taliban insurgent movement, which had once controlled large swaths of territory along the border region with Afghanistan. Terrorist violence in the country has reached a fourteen-year low. Most major cities in Pakistan have robust security systems that have protected them from large-scale terror attacks, even as violence surges in neighboring Afghanistan.

There is much work that needs to be done. And Washington must remain committed to realizing its core objective of helping Islamabad consolidate security gains in its northwest region. It should continue to aid Pakistani counterterrorism forces, provide development assistance that helps stabilize areas once hit by insurgency, and promote connectivity between Pakistan and Afghanistan.

With that said, there is no further justification for the “Af-Pak” binary that has guided our approach toward the region since 9/11. We have to view Pakistan as a pivotal state on its own.

Pakistan’s army, intelligence agencies, paramilitary forces, and police are among the world’s most experienced counterterrorism and counterinsurgency forces. They serve as models for Muslim-majority countries—such as Afghanistan, Egypt and Iraq—that face jihadist insurgencies.

Indeed, Pakistan, once seen as the world’s greatest security threat, may actually be an anchor of stability in the Muslim world, especially as countries like Iran and Saudi Arabia are likely to see domestic tumult in the years ahead.

For that very reason, we need to imagine a new relationship with Pakistan—one based on practical building blocks. Alongside security-related cooperation, we can build an economic partnership with Pakistan, including on energy. Pakistan is likely to open up opportunities for oil and gas exploration, so it can reduce its energy imports and trade deficit. Khan is also keen on eco-friendly alternatives for energy and transport. Perhaps down the road, the U.S. Ex-Im Bank can finance the sale of U.S.-manufactured electric busses and solar panels to Pakistan.

Imran Khan’s rise to power provides no reason for us to back away or adopt a hostile posture. There, in fact, may be a significant upside to his election victory. Much of Khan’s agenda—especially improving human development and combating corruption, tax evasion, and waste—are directly in line with U.S. policy interests.

Khan faces an uphill task. Change is a long-term process, not an event. But disengaging from Pakistan—the world’s sixth-largest country—is not an option. If we focus on tangible areas of convergence and Khan succeeds in pushing forward much of his reform agenda, we may find five years from now a Pakistan on a steady path toward peace, prosperity and regional integration. And that would be a win for both countries.

Arif Rafiq (@arifcrafiq) is a nonresident fellow at the Middle East Institute and president of Vizier Consulting, LLC, which provides strategic guidance on Middle East and South Asian political and security issues.

Image: Imran Khan, chairman of the Pakistan Tehreek-e-Insaf (PTI) gestures while addressing his supporters during a campaign meeting ahead of general elections in Islamabad, Pakistan, July 21, 2018. REUTERS/Athit Perawongmetha