The 5 Deadliest Terrorist Groups on the Planet 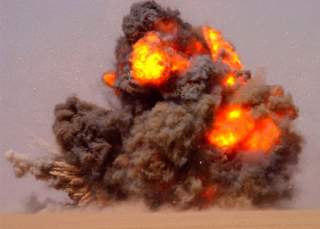 You are more likely to be struck by lightning than killed or injured in a terrorist attack.

This is the type of rhetoric that is often used to calm the public when the national threat level is increased. Although the days of the color-coded ranking system from the Department of Homeland Security are long gone, the U.S. government is still quick to warn the public when there are credible reports of an upcoming terrorist plot against Americans.

Public concerns over terrorism have certainly declined precipitously since September 11, 2001 and have remained far behind the economy, job creation and political polarization on the list of voters’ worries. Yet it only takes one mass casualty attack or a single, publicized beheading of an American citizen to regain the attention of the American public. The fact that 71 percent of American voters in the 2014 midterms were worried about a terrorist attack on the U.S. homeland is an indication that violent groups like Al Qaeda, the Islamic State and Al Qaeda in the Arabian Peninsula are still hovering in the minds of many Americans.

Like it or not, terrorism will continue to be a problem for the United States, its allies and the rest of the international community. Like narcotics or petty crime, terrorism cannot be eliminated—it can only be degraded and managed to a point that allows everyone to live their lives in relative peace.

Here is a list of the five deadliest terrorist groups that are operating today, and the five that are no doubt at the top of Washington’s radar:

1. The Islamic State of Iraq and the Levant:

It takes a special kind of terrorist organization to force the world’s most powerful and professional military into action halfway around the globe. The Islamic State of Iraq and the Levant (ISIL, ISIS or simply the Islamic State) is exactly this type of organization: strong enough to rout several divisions of a national army, and rich enough to sustain their operations at an impressive pace.

Estimated by the Central Intelligence Agency to have a size of 31,000 fighters, ISIL has single-handedly swept across an area of the Middle East roughly the size of Belgium. The swift and easy capture of Iraq’s second-largest city, Mosul, by several thousand ISIL fighters in June 2014 had the effect of not only embarrassing the Iraqi government in the eyes of its people, but revealing how poorly led and pathetic the Iraqi security forces had become. Absent President Barack Obama’s decision to authorize targeted airstrikes against ISIL positions in early August, there was a very real possibility that several more divisions of the Iraqi army could have collapsed.

A major difference between ISIL and the litany of other Islamist terrorist organizations competing for fundraising and recruits is that the former is succeeding in a task that not even Al Qaeda could accomplish: capturing territory, holding that territory and declaring an Islamic caliphate in the very heart of the Arab world. And ISIL is doing it in the most brutal way imaginable: rounding up and executing anyone who shows the slightest bit of resistance to its domination. At least four cases of mass killings by ISIL terrorists have been documented, including the execution of 250 Syrian troops in August after the group captured the al-Tabqa air base. Several weeks ago, over 200 Iraqi tribesmen were massacred west of Ramadi in what can only be described as an attempt by ISIL to extinguish any competitor, however passive, who dares to rise up and challenge its authority.

Combined with a Treasury Department study that assesses ISIL’s crude oil revenue at a value of $1 million per day, it’s safe to say that the United States and the coalition it has assembled has a lot of work ahead of them.

The jihadist group in northeastern Nigeria catapulted to the world’s attention when a boarding school in the Nigerian border town of Chibok was raided in the middle of the night. Around 300 Nigerian schoolgirls were taken captive by Boko Haram militants and threatened with forced marriage and forced conversion.

Yet Boko Haram has been menacing Nigeria’s northern communities for years. Public reports state that the organization was founded in 2002, but it’s activities only reached global spotlight in 2009, when Boko Haram’s new leader, Abubakr Shekau, launched what can only be described as an insurgency against the Nigerian government using nothing but terrorist tactics.

Boko Haram has razed entire villages to the ground, its inhabitants often killed with bullets to the head or burned alive. The Council on Foreign Relations estimates that at least 6,742 people have been killed as a result of Boko Haram’s violence since May 2011—although the murky nature of violence in Nigeria and multiple claims of responsibility guarantee that this is an incredibly conservative figure. No target is off limits for Boko Haram either; last Monday, over fifty schoolchildren were killed in a suicide bombing that many speculate was a Boko Haram member. This wouldn’t be all that surprising, given the group’s history of destroying schools and burning students alive in their dormitories.

What’s perhaps more discouraging than the actual violence is the inept and incompetent way that the Nigerian government has chosen to fight Boko Haram. The three northeastern states of Borno, Yobe and Adamawa have been locked down and under a state of emergency since May 2013, which has essentially allowed the Nigerian army to use the kinds of tactics that would otherwise be prohibited by international humanitarian law. Extrajudicial killings of suspected Boko Haram sympathizers, many of whom are innocent civilians, are thru the roof, and the abuses have gotten so out of control that the United States has suspended some military equipment to the army.

The covert, external operations wing of the elite Revolutionary Guard is not designated a foreign terrorist organization by the United States government (members of Congress have been trying to designate the Quds Force through legislation), but this highly-secretive branch of the Islamic Republic is nonetheless incredibly effective at what it does: connect with, maintain and support terrorist groups in the region that will enhance Iran’s regional posture and keep its enemies off balance. And that is why the Quds Force is so dangerous.

Led by its mysterious commander, Qassem Suleimani (dubbed “The Shadow Commander” by the New Yorker’s Dexter Filkins), the Quds Force is one of the most valuable assets that Iran possesses in its mission to expand its presence in the Arab Middle East and create the kind of leverage that allows Tehran to dictate the terms of the region’s ongoing conflicts. Lebanese Hezbollah, Kataib Hezbollah, Asaib Ahl al-Haq, Hamas, Palestinian Islamic Jihad and Syria’s Bashar al-Assad are all beholden to the Iranians in one way or another, thanks in large part to the money, arms shipments and battlefield advise that the Quds Force provides. In October 2007, the U.S. Treasury Department designated the IRGC-QF as a “specially designated global terrorist entity” for its support to a variety of terrorist organizations, including, but not limited to, a yearly donation to Hezbollah of $100-200 million.

The role of the IRGC-QF has only grown in importance. President Bashar al-Assad and his overstretched and tired Syrian army have the Quds Force to thank for pulling his regime away from the brink of implosion. It’s difficult to believe that Lebanese Hezbollah was not pushed by the Quds Force to deploy inside of Syria on behalf of the Assad regime, and it’s equally unlikely that Syria could have established a pro-government militia so effectively on its own. Behind it all, Qassem Suleimani is pulling the strings. As a former CIA operative told the New Yorker, “Suleimani is the single most powerful operative in the Middle East today, and no one’s ever heard of him.”

Although the Haqqani network was only designated a terrorist organization by the U.S. State Department in the fall of 2012, the organization has been and remains the most lethal strain of the anti-U.S., anti-ISAF insurgency in Afghanistan. Whenever a high-profile, coordinated terrorist attack occurs in the Afghan capital, Kabul, those watching Afghanistan almost immediately pin the blame on the Haqqanis—a testament not only to its propensity for daring assaults, but its ability to pull them off, despite a heavy Afghan security presence.

It’s not the attacks, however, that make this strand of the wider Taliban insurgency dangerous. Rather, it’s the Haqqanis’ deep tribal relationships in eastern Afghanistan and willingness to work with, facilitate and host other terrorist organizations that strike fear into the hearts of Afghans and Pakistanis alike. Al Qaeda, the Islamic Movement of Uzbekistan, the Pakistani Taliban, the Turkistan Islamic Party and the Quetta Shura Taliban all rely on the Haqqanis for access across the Afghan-Pakistani border or for tactical advice on how to conduct the most effective operations against Afghan and coalition troops. The Combatting Counterterrorism Center at West Point says it best in a lengthy and comprehensive report about the organization: