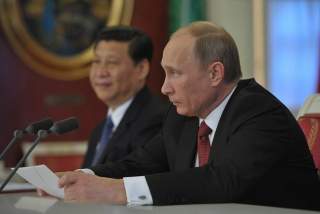 The United States is on the brink of committing a cardinal sin in foreign policy: antagonizing two major powers simultaneously. There are frictions in bilateral ties with both Moscow and Beijing that have reached alarming levels over the past year or so. It is a disturbing development that could cause major geopolitical headaches for Washington unless the Obama administration takes prompt corrective measures and sets more coherent priorities.

Russia’s invasion and annexation of Crimea has created a deep freeze in relations that were already rather frosty. Although few knowledgeable Americans agreed with Mitt Romney’s assertion in the 2012 presidential campaign that Russia was the principal geopolitical adversary of the United States, there were surging sources of friction even before the onset of the Crimea crisis, including sharp disagreements over policy toward Syria and Iran. The Crimea episode has made matters dramatically worse, with Washington and its European Union allies imposing economic sanctions on Russia, and the Kremlin responding with (mostly symbolic) sanctions of its own. The language coming out of both Washington and Moscow is characterized by a hostility not seen since the end of the Cold War. U.S. officials ruminate about deploying troops to NATO members in Eastern Europe to discourage additional expansionist moves by Russia. Hawks in the U.S. foreign policy community openly advocate an even more provocative troop deployment, along with military aid, to Ukraine.

Washington’s relations with Beijing also have become noticeably more contentious. That point was highlighted during Secretary of Defense Chuck Hagel’s recent visit to China. A series of testy exchanges culminated with a pointed warning from Defense Minister Chang Wanquan that efforts to “contain” China would never succeed. Beijing has been increasingly irritated by U.S. stances on a variety of issues. Washington’s position regarding China’s territorial disputes with neighboring states in both the South China and East China seas is an especially prominent grievance. From Beijing’s perspective, the Obama administration has exhibited an unsubtle backing of Japan, the Philippines, Vietnam, and other rival claimants. The new security agreement between Washington and Manila is likely to further exacerbate Sino-U.S. tensions on territorial issues.

The simultaneous deterioration of U.S. relations with Russia and China is more than a little worrisome. It violates an important admonition that Secretary of State Henry Kissinger made during the Cold War. Reflecting on the Nixon administration’s decision to normalize relations with China, Kissinger emphasized the underlying geostrategic rationale. “Our relations to possible opponents,” he wrote in White House Years, the first volume of his memoirs, “should be such that our options toward both of them were always greater than their options toward each other.” In other words, he believed that Washington should take steps to make certain that its ties to both Beijing and Moscow were always closer than their ties to each other. It was a good strategy then, and it is a good strategy now.

Clumsy diplomacy by the Obama administration threatens to produce a different and much more unpleasant result. Washington’s conduct may even be pushing Russia and China together, causing them to mute their own serious differences—including border disputes going back into the nineteenth century and ongoing political and economic competition in Central Asia—to deal with more pressing worries about the United States.

Even the tone of U.S. diplomacy toward both countries is sometimes needlessly shrill and confrontational. Obama administration officials have thrown diplomatic temper tantrums because Beijing and Moscow have dared to resist U.S.-led efforts to unseat Syrian leader Bashar al-Assad and impose increasingly harsh economic sanctions on Iran. National Security Adviser Susan Rice, at the time U.S. ambassador to the United Nations, denounced Chinese and Russian vetoes of a Security Council resolution on Syria, proclaiming that her country was “disgusted” and adding that such actions were “shameful” and “unforgivable.” That attitude unsurprisingly drew sharp rebukes from Moscow and Beijing.

Ideally, the United States should seek to repair relations with both countries. If Obama administration officials cannot bring themselves to adopt that approach, they should at least choose one major power to be the designated adversary, not antagonize both governments. The last thing we should want to do is inadvertently help reverse the split between Moscow and Beijing that began in the late 1950s.

Those questions do not have easy answers. Russia may seem to be the more worrisome potential adversary in some categories, China in others. But making such complex assessments is the challenge confronting any effective foreign policy. Dodging that task and creating the risk of making adversaries of both Moscow and Beijing, which appears to be the current U.S. approach, is not an intelligent option. Down that path lie frustration and potential disaster.