Washington's Hands Are Tied in Venezuela 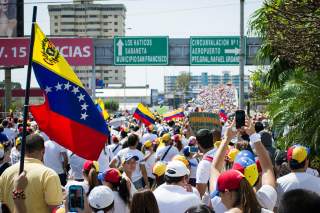 Last week, at least twenty-nine Venezuelans died during countrywide protests, demanding elections and the end of the incompetent and corrupt government led by President Nicolás Maduro. In the United States and in the region, this slowly unfolding catastrophe has led observers to call repeatedly for the United States to do something to resolve the crisis, echoed by lamentations over the loss of U.S. influence in the region. It is impossible to predict when the Maduro regime will end, or how finally it will be pushed or pulled out of Caracas. But the Venezuelan crisis has already revealed a great deal about international relations in the Americas.

Who Has Any Influence?

First, at this point the United States has little or no influence over the decisions of the senior leaders and individual playmakers in Venezuela’s government or its military (which are the same thing), or over those of the opposition. The United States has applied the usual low-cost tools of diplomacy and pressure (economic sanctions, sanctions and drug-trafficking indictments targeted at key regime leaders), to little or no effect. Hugo Chavez neutralized U.S. influence when he expelled virtually all U.S. diplomats, drug chasers, military liaisons and development workers—as well as spies, most likely—and privatized companies and industries previously controlled by or tied to U.S. corporations.

The only obvious remaining source of U.S. influence would be to cut off all U.S. purchases of (what remains of) Venezuela’s oil exports. This would cut whatever legs are left from under the economy. However, similar to the embargo against Cuba, the costs would fall heavily across all of Venezuelan society, not only the government, and the impact would be far from certain. For decades, harsh sanctions against autocratic regimes in Cuba and North Korea have served mostly to validate those government’s claims of U.S. “economic warfare” and to rally nationalist support. Also, this would affect several refineries and other facilities in Texas, Louisiana and elsewhere, built specially to process heavy Venezuelan crude. Global oil prices would be likely to rise, helping the Maduro regime. In short, there are several reasons why this course of action has not already been pursued. So again, as of today the United States seems to have few, if any, unilateral points of leverage over the Maduro regime.

But before we lament U.S. weakness, it is important to point out two facts. First, U.S. policies over the last decade have contributed to Washington’s lack of access in Caracas and influence in the country. By supporting the 2002 coup against the then-popular Hugo Chávez government, which failed miserably—maybe the United States did not have spies there, after all—the Bush administration crippled U.S. credibility in the region as a champion of legal, electoral democratic transitions. More recently, by leveling drug trafficking charges against several key members of the Maduro regime (including the vice president, the interior minister and the chief of the armed forces), the United States has complicated the shady deals necessary for corrupt and entrenched individuals to step away and allow peaceful regime change. President Maduro has surrounded himself with men who have no choice but to support him, or at least the continuation of an illegal regime, because their future without it most likely involves a prison cell.

It is also remarkable, though, that after more than a decade of the Chávez-Maduro governments’ courtship of China, Russia and Iran—not to mention their coddling of their Bolivarian allies across Latin America—that none of these purported “rivals” to U.S. influence has offered to help Maduro as a furious, desperate public takes to the streets to oust him. Despite their expanded regional presence, at least for now they remain nonplayers in the region’s political games. China continues to invest in Venezuelan oil production, but this is logical, considering that Venezuela owes it roughly $40 billion in debt, to be paid in oil. Most other foreign investors have cut their losses and pulled out. Perhaps the Chinese are realizing the implications of the fact that its main client state in the region is hopelessly mismanaged, and that when and if a future government emerges in Caracas, it may well revisit some of the strategic deals Maduro and Chávez made with their ideological partner.

So what international actors have influence? Well, the Vatican tried, and failed, for weeks to lead negotiations between the government and the opposition. The latest word is that Maduro wants to restart that charade, but the opposition is uninterested. UNASUR, the South American political initiative once championed by Brazil, Argentina and others when they were friendly with Chávez, also tried and failed. So the Venezuela situation says less about U.S. influence than it does about how successful the Venezuelan regime has been at insulating itself from any and all external pressures.

This is not surprising, considering that the Chávez and Maduro governments have been steered by Cuban advisors. This suggests that, as in the Colombia-FARC peace negotiations, Havana will play a significant role in whatever successful crisis-resolution dialogue and agreement emerges. As usual, the cagey Cubans punch way above their weight in regional international affairs.

Can Venezuela’s Neighbors Do Anything?

The failure of Venezuela’s South American neighbors to formulate any effective response is remarkable. For sure, international affairs in the region have historically hinged on a shared normative commitment to nonintervention. Leftist governments (by U.S. standards), typical across the region, tend to harp on the damage wrought by twentieth-century interventions by the United States. Rightly so, to a point. But in the twenty-first century, it has been leftist leaders in the region, particularly Hugo Chávez, who have covertly orchestrated—largely through political party ties—campaign payments, protests, strategic messaging campaigns and civil-society movements aimed at influencing elections in Brazil, Peru, Colombia, Honduras and elsewhere. Another explanation for the deliberate feckless response from the region is that Latin American international institutions, such as UNASUR, tend to operate under consensus rules, hindering their effectiveness at coordinating decisive actions.

The United States has made it clear, thus far, that it is uninterested in leading a response to the crisis. For over a decade, the Venezuelan government has taunted and insulted Washington before an indifferent or supportive South American community. For decades, the Latin American governments of the left and center-left have demanded that Washington leave them alone. For once, they have gotten what they wanted—in South America, anyway. Washington has stood back and left them largely to address their problems themselves. But at present, they are unprepared and unwilling to take on the costs and risks of leadership. Brazil in particular, because it often and loudly claims itself to be a powerful nation worthy of greater stature in international affairs, appears to lack the stomach to lead a regional effort to present the Maduro regime with a set of credible carrots and sticks to help convince it to step down and allow a democratic transition. Rocked by corruption scandals and slogging themselves through economic recessions, the governments of the key South American partners have few resources—financial or military—to offer a Venezuela that is looking at decades of need and instability.

The only organization that has tried thus far to develop a concerted regional response is the Organization of American States, long supported by the United States but viewed with skepticism across Latin America. In line with its charter and core principles in support of democracy, its Uruguayan secretary general, Luis Almagro, tried to rally a pan-American position demanding that Maduro regime allow elections, free its political prisoners, and quit its violent repression of the opposition and citizen protesters. Unfortunately, thus far his efforts have fallen flat against a group of governments that either receive cheap oil or money from Caracas (mostly in the Caribbean) or are ideologically opposed to the OAS, as well as the United States. And now, Maduro has warned that he will withdraw Venezuela—for decades South America’s most stable constitutional democracy—from the OAS. Venezuela’s allies in the Bolivarian Alliance, including Ecuador, Nicaragua and Bolivia, cheer on the demise of the organization. The region’s deep political divides are crippling for regional organizations that depend on political alignment to be effective.

So What Should Be Done?

So the United States is not in a position to lead an effort to convince or coerce Maduro, with several of his top lieutenants, to step down. What it must do instead is to encourage, promote and support an effort among the nations of the Americas to do so themselves. As violence increases and misery deepens across Venezuela, it is not the United States that faces an imminent threat of massive cross-border flows of refugees needing immediate food, shelter and medicine—and including traffickers and gangsters eager to set up operations in their new homes. It is chiefly Brazil and Colombia. Stricken by economic recession and political crises, this is not the best of times for these countries to be forced into regional leadership. But crises do not come when you want them to. Those two nations must find the political courage and institutional means to coordinate between themselves and with partners (potentially including Cuba, Russia, the Vatican—and Jared Kushner or another of Trump’s inside players) a concerted, firm negotiation with Maduro and his circle.