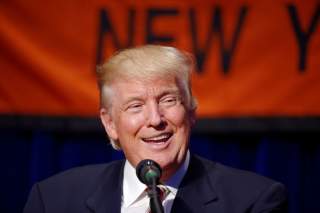 For months, Donald Trump’s opponents and their partners in the media have hinted darkly about his business connections in Russia and other precincts of foreign intrigue. There’s only one thing missing from the search for guilt: real evidence.  Furthermore, the characters telling this tale reveal more about Washington insiders who favor the status quo than anything Trump has ever done.

The story usually goes that Trump had dealings with Russian oligarchs and the like—perhaps even criminals—and this arrangement, rather than a calculation of national interest, is why Trump wants a constructive relationship with Russia and its president, Vladimir Putin. For example, last week, ABC published the unfortunately titled, “From Russia With Trump: A Political Conflict Zone.” But the article does nothing more than assert that Trump and his children have promoted their real estate products to Russian consumers, among others. There is nothing illegal, unethical, or unexpected about a real estate magnate selling condos to Russians.

The overall storyline that Trump must be guilty of something has been around for months. However, attention to the issue by the media and Hillary Clinton’s campaign has spiked in recent weeks.

On September 19, when Clinton was off the campaign trail convalescing with pneumonia, fifty former bureaucrats who worked in national security-related positions in the Clinton and Bush administrations attacked Trump in an open letter. Titled “A Call For Transparency,” the letter is a case study in fact-free innuendo. It conveys no new information and cites only a single Newsweek article published five days earlier as a source. The authors even disclaim this weakness in fine Washington fashion of covering one’s posterior, writing: “We do not know whether all of the facts in the Newsweek article are accurate.”

Chances are they are not. To repeat an Orwellian adjective that the open letter authors used themselves, the Newsweek piece, written by Karl Eichenwald, is “problematic.” It purports to have conducted a “close examination” of Trump’s business, which “reveals an enterprise with deep ties to global financiers, foreign politicians and even criminals.”

Which financiers, foreigners, and criminals? One implied transgression was Trump's meeting in the late 1990s with two executives from South Korea’s Daewoo Engineering and Construction Company. Daewoo had “worked with” Trump’s company on a construction project in Manhattan. They now wanted to license the Trump name for a development in South Korea, which the two companies eventually arranged —

something quite ordinary for a brand-focused real estate company like the Trump Organization. So where’s the smoking gun?  Eichenwald writes that the chairman of a company related to Daewoo went to jail after his company engaged in accounting fraud. When Daewoo went through bankruptcy, it “required revisions in the Trump [brand licensing] contract,” but “the Trump Organization still remains allied with Daewoo Engineering and Construction,” whatever that means.

Got all of that? Trump met two guys from a company and later worked out a deal to license his name to a project, something that happens every day in real estate. The chairman of a related but nonetheless different company, whom the article never says Trump even met, goes to jail for something unrelated to Trump and later goes into bankruptcy. In that bankruptcy, the contract with Trump’s company is revised — something that happens every day in corporate bankruptcy, especially since changing the terms of contracts is one of the main purposes for bankruptcy. So exactly what has Trump done that is illegal or unethical?

Eichenwald does not even stop there with exceedingly abstract guilt by association. He writes that Trump ruminated about South Korea possibly developing its own nuclear weapons instead of relying on the United States. Then Eichenwald pivots to note that Daewoo Engineering and Construction is involved in South Korea’s nuclear energy industry, and asserts that it might benefit if South Korea later decides to pursue a weapons program. This is hardly airtight reporting and it is not even clear of what he is accusing Trump.

The article continues in the same manner with projects in India and the Middle East. Throughout, Eichenwald insinuates that Trump’s business activities will cause him to pull punches with adversaries abroad. But he defeats his own point in writing about supposed Trump conflicts in the Middle East, especially in Turkey, where the Trump Organization has a branding deal with a Turkish real estate developer. Citing Trump’s “anti-Muslim rhetoric,” as he does three separate times in the article, Eichenwald asks: “Would Trump act in the interests of the United States or his wallet?” The answer is quite obviously the former, since Trump’s licensing deals long predate his presidential campaign and the concerns about refugees and radical Islam it has conveyed. Eichenwald even points out that Trump has been willing to draw the ire of Recep Erdogan, Turkey’s increasingly Islamist president, despite a Trump-branded property in Istanbul.

The truest part of Eichenwald’s article comes near the beginning when it concedes that there is “no evidence the Trump Organization has engaged in any illegal activities.” One assumes this line is the addition of a Newsweek editor or lawyer who probably recognized that Eichenwald was engaging more in innuendo-based politics than real journalism.

An unsubtle indication of this possibility occurs early in the Newsweek article where Eichenwald digresses from his thesis about supposed Trump corruption to opine about the evidence of corruption involving the Clinton Foundation. He writes: “There are allegations that Hillary Clinton bestowed benefits on contributors to the foundation in some sort of ‘pay to play’ scandal when she was secretary of state, but that makes no sense because there was no ‘pay.’” Eichenwald’s claim is of course nonsense: the Clinton Foundation and its now-defunct Clinton Global Initiative were nothing if not good at vacuuming cash from foreigners with interests before the Obama administration.  Governments like those of Qatar, Kuwait, and Saudi Arabia donated tens of millions to the foundation and Bill and Hillary Clinton separately netted at least $153 million in speaking fees, many of which came from foreign sources.

Eichenwald also repeats a claim from Clinton supporters: “about 90 percent of the money [the Clinton Foundation] raised went to its charitable programs.”  This is highly doubtful for an organization that managed to spend $9.2 million on conferences and conventions in a single year. In fact, the amount of foundation money that made its way to grantees was closer to just 10 percent.

Eichenwald’s statements outside of his article call his objectivity further into question. His article got him an interview on PBS’s Newshour. There, reprising an undercurrent of his Newsweek article, he editorialized that “Donald Trump got up and insulted Muslims around the world.” Then, after the PBS anchor noted that Trump promised to cut ties with his businesses if elected, Eichenwald delivered the clincher: “Trump’s too smart a businessman not to know that he’s lying on this one.” In a separate Newsweek article last week, Eichenwald breathlessly opined: “Trump can’t skip past his perfidy here.”

Eichenwald has every right to hate Donald Trump, be upset that Trump wants to confront radical Islam, and support Hillary Clinton for president. However, the public should know that these impulses are behind shoddy insinuations being passed off by Newsweek as journalism.

Furthermore, the public should know the motives behind those who wish to pass off Eichenwald’s hit piece as objective journalism. The national security bureaucrats who penned the September 19 open letter also have an ideological ax to grind—one that reveals an interesting consensus in the Washington foreign policy establishment.

One of the more frequent faces in the media among the fifty pamphleteers is Michael Morell, the former acting director and deputy director of the CIA. Never was there a better archetype for a bureaucrat with an agenda playing the role of an objective national security expert. When General David Petraeus was getting acquainted with the CIA he would soon run, Morell advised him: “Don't pull rank in meetings by sitting at the head of the table.” In other words, don’t deign to tell us lifers at this floundering bureaucracy how to do things differently just because you turned around a losing war we helped start with false intelligence. Morell promotes himself to the media as “humble,” especially given his former agency’s many intelligence failures. But humble Morell may be bucking for something big in a would-be Hillary administration: He has taken to the media more recently to say that “Donald Trump is not a patriot.” In August, he published an article in the New York Times entitled, “I Ran the CIA Now I’m Endorsing Hillary Clinton.”

Engaging in these activities is of course Morell’s prerogative, having moved on from the CIA (but enjoying a fat government pension). However, it is important for the public not to see him and his colleagues as objective arbiters of national security matters. Rather, they are deeply invested in Hillary Clinton and the foreign policy establishment she embodies and champions. Some of the letter’s other signatories are longtime Democratic hands like Ellen Tauscher and Wendy Sherman.  Some are Morell-like civil servants with agendas like Michael Vickers and Thomas Fingar. Then there are neoconservatives like Robert Kagan and Paul Wolfowitz. Rounding out the list is the former director of the George W. Bush Institute, James Glassman.