Watch Out, NATO: Turkey and Russia Might Team Up 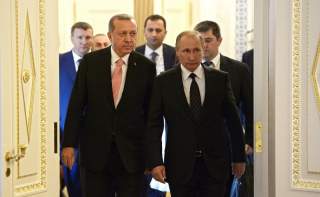 As Russia’s President Vladimir Putin and Turkey’s President Recep Tayyip Erdogan conclude their much-anticipated August 9 “make-up” meeting, comfortable certainties about global politics might be crumbling faster than previously thought. Putin is the first head of state to meet with Erdogan since the failed July 15 coup, demonstrating the Russian president’s skill at being first to the punch and establishing “facts on the ground” while Western policymakers remain mired in contradiction and inaction. Among Turks, Putin has an extremely receptive audience for his platform of anti-Americanism and a recalibration of the existing world order, pushing the West into its usual role of reaction and damage control.

Responses around the world to the coup and to Erdogan’s broad sweep against opposing forces within Turkey following the coup have been mixed. Even so, Turkey’s path towards joining the European Union has taken another tortuous turn. Turkey’s position within NATO, sacrosanct since 1952, may be under scrutiny. Most significantly, Turkey’s relationship with the United States is in desperate straits, with Erdogan and other senior leaders making repeated accusations against America in relation to the coup. This fallout has pushed Turkey further from the West than at any point since the end of the Cold War. The separation represents a major opportunity for Putin to exploit. Two of the world’s most arrogant, aggressive and authoritarian strongmen may realize that cooperation rather than antagonism is their best option. For the West, the difficulties inherent in such a promising partnership are severe, leaving the potential for a dramatic geopolitical reorganization.

Russian-Turkish have been geopolitical rivals for centuries. The two powers were on opposite sides during the Cold War, but since its end, Russian-Turkish relations have had their ups and downs. Massive opportunities for economic cooperation exist: increases in trade and tourism along with coordination on major energy projects like the Turkish Stream pipeline in the Black Sea. This potential has largely been counter-balanced by opposing geopolitics on issues like NATO, Ukraine, Syria, Armenia and Cyprus. Relations between Russia and Turkey reached a low-point in November 2015 when a Turkish F-16 shot down a Russian bomber aircraft carrying out operations in Syria. At the time, there were questions about the involvement of NATO in the crisis and the possibility of escalation.

In the wake of the failed July 15 coup, however, Erdogan and Putin finally seem prepared to bury the hatchet. Numerous outstanding issues are working to push the two countries towards compromise. First, the failed coup was an uncomfortable reminder to Putin that even in repressed societies, revolution against authoritarian policies is never too far from the surface. Both men harbor the same fear that the United States is actively conspiring for their overthrow and supports opposition forces. This shared fear may provide an important foundation for cooperation. Achieving a collaborative and profitable modus vivendi would strengthen the domestic base for both strongmen and work towards shutting out American influence, real or imagined, in their regions.

Second, the situation in Syria has now been stabilized in Russia’s favor. Erdogan opposed President Bashar al-Assad for a time, but seems to have come around to accepting that Assad will not be forced out. As Turkish and Russian policies in Syria converge, the largest potential stumbling block to an accommodation grows less prominent. Erdogan remains more concerned with other issues in Syria, like jihadists transiting through Turkey or, worse, returning to carry out attacks in Turkey. Most significant for Erdogan is the continued strong position of Kurdish forces in northern Syria and their operations in eastern Turkey. These issues are best contained with Russian cooperation.

Third, Turkey and Russia need each other economically. Sanctions by the United States and the European Union in the wake of Russia’s annexation of Crimea, persistent lower oil prices and general economic mismanagement have caused a significant contraction in Russian gross domestic product through 2015 and the first quarter of 2016. Although Turkey has fared better, modest economic growth of 1–5 percent from 2012–2016 has been dogged by steady inflation, which nearly touched 9 percent in the first quarter of 2016. Reinvigorating trade and tourism between the two countries and restarting the moribund Turkish Stream pipeline promises major economic benefit to reverse these trends.

Most significantly, American-Turkish relations have been under strain since Turkey’s failure to allow American troops to open a northern front during the invasion of Iraq in 2003. Over the last decade, Pew’s Global Attitudes Survey has consistently ranked Turkey as one of the most anti-American countries in the world. Turks typically contest first place in anti-Americanism with Pakistan, often having even more unfavorable opinions of the United States than respondents in the Palestinian territories and Russia. This is a remarkable feat for a NATO ally.

The drama of July 15 has done nothing to improve this trend. During the coup, the airspace over America’s Incirlik Airbase was closed, forcing American forces to suspend airstrikes against ISIS from this location. Two weeks later, angry protesters and police surrounded the base and closed access, claiming that a potential new coup attempt was in the offing. Given the presence of some five thousand American airmen in this critical location and almost one hundred tactical nuclear warheads, such developments were hardly met with equanimity in Washington.

This was not all. President Erdogan and senior Turkish officials have consistently accused the United States government, the U.S. military, and, of course, the Central Intelligence Agency, of conspiring with the coup leaders or even instigating them. Accusations of involvement in the coup have even been made against a retired U.S. general. These same voices in Turkey have vilified and blamed the cleric Fethullah Gülen for inspiring the coup. As Gülen has lived in the United States since 1999, he has become the focal point for the convergence of Erdogan’s personal hatred for his onetime partner and anti-American conspiracy theories. Erdogan’s demands for his extradition to Turkey to face a (kangaroo) court have been refused by the United States, in spite of warnings that a failure to hand over the cleric will poison relations. Comparisons have even been made between America’s “harboring” Gülen and the Taliban’s support for Osama bin Laden.

Such fissures represent a golden opportunity for Putin to do what he is masterful at doing—provoking divisions between NATO allies and reaping the benefits. This time, the opportunity has arrived with little or no effort on his part, although there are rumors that Russian intelligence tipped off Erdogan to the coup. The United States and Turkey are squabbling publicly. The coup has left Turkish security forces significantly weakened, and Erdogan’s purge has taken half the general officers of NATO’s second-largest military—all at a time when a U.S. presidential candidate has questioned the utility of NATO, Britain has voted to leave the European Union, and ultranationalist parties (some of which enjoy funding from Moscow) remain popular across Europe. Putin could not have dreamed of a better international situation.

For their part, American and European policymakers seem content to do as little as possible. Such short-sighted inactivity and lack of strategic vision allows the initiative to pass to the Kremlin. Turkey’s increasing detachment from and disenchantment with the West mean Putin and Erdogan have more in common now than ever before. If that reality is understood at this meeting and becomes the basis for joint policy, Western security and the stability of NATO will be weaker than at any time since the end of the Cold War. It is a disturbing possibility, but, nevertheless, a realistic one.