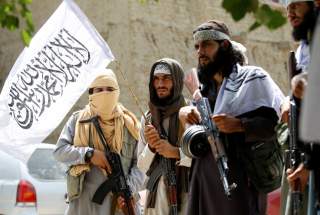 THERE IS no chance of military victory over the Taliban. Nor, without a U.S. commitment to withdraw its troops and accept a major share of power for the Taliban, does there seem any serious chance of a peace settlement (the brief truce to mark a religious festival notwithstanding). Nor, with 100 percent of the Afghan security budget and around 60 percent of the civilian budget funded by the United States and other outside donors, is there any chance of the Afghan state standing on its own feet.

Financially and militarily, the existing U.S. commitment is sustainable. With U.S. military actions reduced to air support for the Afghan national forces and limited interventions by U.S. special forces, casualties have been vastly reduced. Only four U.S. soldiers have been killed in Afghanistan so far this year, and seventeen in 2017, compared to 496 at the height of U.S. operations in 2010. At around $4.94 billion in military aid to the Afghan state and $1.3 billion in civilian aid in 2017–18, the financial cost is a tiny proportion of the current U.S. military budget of almost $700 billion. There have been strong complaints from the U.S. Congress and the office of the Special Inspector General for Afghanistan Reconstruction (SIGAR), John Sopko, about the corruption and waste in these programs. To some extent, however, this misses the point. If the intention is to prop up the existing Afghan state, rather than to perpetuate fantasies about turning that state into an economically successful democracy, then just because the U.S. money was stolen does not mean that it was wasted. It went to provide the patronage on which the Afghan state depends to keep local power brokers on their side, rather than joining the Taliban or setting up as independent warlords.

And if the U.S. goal is limited to maintaining the Afghan state at its existing very circumscribed level, then from a purely military point of view the U.S. strategy is working. As was the case with the (much better armed) mujahideen rebels during the period from the Soviet military withdrawal in March 1989 to the collapse of the USSR in 1991, Taliban guerrillas have been able to conquer large areas of the countryside (mainly, but not exclusively, those inhabited by ethnic Pashtuns).

When, however, the Taliban concentrate to try to capture defended towns, they are beaten back or forced out with heavy casualties under pressure from the overwhelming firepower of the U.S. Air Force and Afghan artillery. If the danger to Kabul were restricted to the Taliban threat on the battlefield, then despite poor training, corruption, low morale and high desertion rates in the Afghan army, this situation could persist for a very long time indeed; since it also corresponds to a pattern of most of Afghan history whereby states have controlled the towns but had only a very limited presence in the countryside.

IF, HOWEVER, the American people are to go on making this commitment, it is politically and morally desirable that they should be told the truth about the real interests of the United States in Afghanistan, and the dangers in that country—since both of these have been significantly (if often unconsciously) misrepresented. If there is ever to be stable and long-lasting peace in Afghanistan, the most important external actors will be not the United States and the West, but Afghanistan’s neighbours, China, Pakistan, Iran and to a lesser extent Russia. The issue of war and peace in Afghanistan therefore needs to be introduced to wider thinking on U.S. foreign and security policy, as it illustrates one of the costs that the United States suffers from a strategy of confrontation with other powers.

As to U.S. interests in Afghanistan, these have been stated as preventing the country from re-emerging as a base for international terrorism and a threat to regional stability; combating heroin production in Afghanistan; developing democracy, human rights and women’s rights in Afghanistan; and (though this is not so often publicly stated) keeping U.S. bases there as potential instruments against Iran, Russia and China. In terms of threats, these are said to be the prospect of Taliban military victory leading to the establishment of an Islamist state supportive of terrorism. All of these propositions are either partially true or altogether false.

When it comes to the international terrorist threat, it is worth remembering that, after the United States, the country that has suffered by far the worst from extremists trained in Afghanistan has been Russia. The Taliban government was the only one to recognise the independence of Chechnya in the 1990s. The international militant force led by the Saudi “Emir Khattab” (Samir Saleh Abdullah), which did so much to radicalise the Chechen fighters and inspire them to jihad against Russia, was trained in Afghanistan. So too was their ally, the Chechen commander Shamil Basayev, whose fighters carried out two of the worst terrorist actions of modern times—the attack on the Nord Ost theatre in Moscow and on the school at Beslan.

Russian national interests are also permanently, and even existentially, threatened by Islamist extremism in a way that those of the United States are not. The Islamist terrorist threat to the United States stems from America’s hegemonic role in the Middle East and alliance with Israel. Whatever the crazier parts of the U.S. political spectrum may believe, there is no danger of the establishment of Sharia law in Tennessee. In Russia, Muslims make up some 15 percent of the population, and their numbers are growing. Apart from the restive North Caucasus, two Muslim republics—Tatarstan and Bashkortostan—lie in the very heart of Russia. Islamist militancy also threatens the stability of Russia’s Muslim neighbours, with the accompanying risk (as in the European Union) of a wave of Muslim refugees to Russia.

Yet the Russian government today has been holding exploratory talks with the Taliban, and, together with China (also threatened by Islamist militancy and separatism in Sinkiang), is seeking to draw them into a peace settlement (it has been alleged by U.S. officials that Russia has also provided aid to the Taliban, though this is strongly denied by Moscow). If not yet entirely convinced by repeated Taliban statements that they do not support international jihad and will not allow Afghanistan to be used as a base for attacks on other countries, the Russians are persuaded enough to take a diplomatic risk on this proposition—if only because Moscow has become convinced that the Taliban cannot be beaten and that the United States may in fact withdraw (as Russia itself did in the 1990s), leaving Afghanistan’s neighbours to deal with the resulting mess.

Moscow’s change of heart reflects growing hostility to the United States but is predicated on the reasonable belief that the Islamic State (ISIS) now represents by far the biggest threat of international terrorism and extremism, and that since the appearance of isis in Afghanistan, the Taliban are compelled to fight against isis as rivals for the Islamist mantle in Afghanistan. Indeed, the leadership of isis in Afghanistan is chiefly composed of defectors from the Taliban (in the case of one Uzbek commander in northern Afghanistan, Mufti Nemat, after being ousted from the Taliban for oppressing the local population, he initially tried to join the Afghan government forces before moving to isis). While the United States has conducted successful air strikes against ISIS, the bulk of the fighting on the ground against the group has been carried out by the Taliban.

As for the idea that the U.S. military presence contributes to combating the heroin trade, this is self-evidently absurd. Poppy cultivation and heroin production exploded after the U.S. invasion of 2001, and were only somewhat reduced again during the height of U.S. military operations in 2008–12. In 2017, opium production reached a record estimated 9,000 tons. And while the poppies are mainly grown in areas controlled by the Taliban—and the group derives part of their income from taxing the heroin trade—much of the trade itself is in the hands of figures allied with the Afghan state or even serving in the Afghan army and police. Efforts by the United States and its allies to combat the trade have proven almost totally ineffective while managing to alienate parts of the rural population.

Certainly, the efforts of the Afghan state to combat the trade, insofar as they have existed at all, have been completely ineffective. The only force to have suppressed the heroin trade effectively over the past thirty-five years was the Taliban government in 2000–01—mainly because they were the only force during that period to have exercised effective political and moral authority over the Afghan countryside. They did so in the hope of international recognition and aid—and Russia, which (like Iran) suffers terribly from Afghan heroin, is attracted by the idea that such a deal with the Taliban might be possible in future.

Almost as questionable are the propositions that the U.S. military presence contributes to resisting extremism in the region and acts as a lever against Iranian, Russian and Chinese power. By far the greatest threat of extremism in the region is in Pakistan, because of its population of 200 million people, nuclear weapons and large army. The Pakistani Taliban revolt was itself a product of the U.S. invasion of Afghanistan, and was stoked—not restricted—by Washington’s actions there.