The Way Forward for Hong Kong 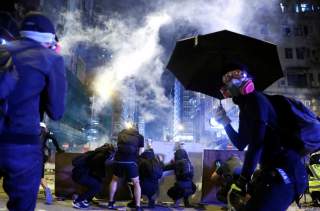 How can the Hong Kong protests end in a way that serves everyone’s best interests?

How can China take a black-eye and turn it into a positive?

How can both sides build constructive, sustainable models for peace and prosperity?

The answer is: Everybody—Beijing, the Hong Kong government, and the protestors—must put something on the table.

What does that mean for Beijing? First, the regime needs to drop its bully act: no more threats of “crushed bodies and shattered bones” if Hong Kong tries to split off from China. No serious actor is suggesting a split. And this kind of gratuitously provocative rhetoric accomplishes nothing.

Instead, Beijing ought to trumpet its continuing commitment to the “one country, two systems” agreement—explicitly reaffirm what that means in terms of preserving Hong Kong’s freedoms.

Cheering the deal that it made decades ago has a big upside for the Chinese government. By publicly reaffirming the principle behind the Basic Law, Beijing would send the message that it honors its commitments. Certainly, it would be a timely message.

The world is becoming increasingly skeptical about Beijing’s intentions of holding up its end of the international bargains it has made and its desire to treat its partners fairly and with respect. Given its not-so-great reputation for bullying and exploiting others, the Chinese government could do with an act of contrition that says it is serious about treating others well.

The virtue of this proposal is that it is true: China has everything to gain from respecting one country, two systems. Hong Kong plays a unique and important role for China: it helps China grow without lying, cheating and extorting in the global free market.

What does Hong Kong’s government need to do? It needs to take a side.

From the start what got the government in trouble was the people’s perception that their government wasn’t on their side. Its introduction of the extradition law raised all kinds of red flags about the government’s commitment to protecting individual freedoms. The government’s heavy-handed response to the early demonstrations only cemented the distrust.

Hongkongers took to the streets in part because they believed their government was much more concerned about placating Beijing than serving them. The government has tried to backtrack on some of its transgressions and focus attention on long-needed reforms to deal with bread-and-butter issues such as the lack of affordable housing. The fact that so many continue to protest demonstrates that the government still has much to do to regain the trust of its people and the confidence of the world in the future of Hong Kong.

The protestors, too, need to clean up their act. A leaderless and directionless mass protest expends a lot of energy to an uncertain end. The people have to stand for something.

If Beijing vigorously recommits to “one country, two systems;” if the government of Hong Kong demonstrates real contrition and a firm resolve to put the interests of the people first; then the people have to acknowledge that they’ve achieved something worthwhile—and set their sights on a responsible objective.

A major public event may be the best way to clear the air—a forum in which government leaders, police officials and prominent protesters publicly explain and take responsibility for their actions. There should be mutual acts of contrition that demonstrate respect for the rule of law and a commitment on all sides to seek to rebuild trust and confidence.

Demand for overnight change or revolution is unreasonable. The protesters' current demands are not. They should be on the table.

In the West, we often refer to Hong Kong as the canary in the coal mines—a leading indicator for how China treats the world. The crisis has created a unique opportunity for all sides to work together to create a more constructive vision for the way forward in Asia. All sides will have to give something to gain something, but China has the most to give and gain. If Beijing plays its cards correctly, it can face the world with more confidence, less bullying, and gain the respect and trust of other nations around the world that are increasingly doubtful about the wisdom of doing business with China.