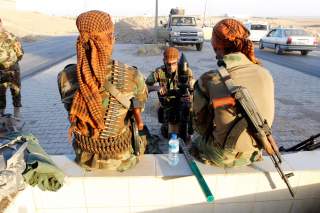 Using his trademark oversimplification, Senator Lindsey Graham (R-SC), told CNN, “If we leave now, the Kurds are going to get slaughtered.”

Surely the ghosts of Mark Sykes and François Georges-Picot smile on Graham and his unpopular but vocal cadre of Beltway interventionists. Those two men, authors of the Sykes-Picot agreement that secretly planned the carving up of the Middle East by imperialist British and French forces upon the conclusion of World War I, might sympathize with the vanity of those who think they can advantageously remake the region.

For the rest of us, skepticism is warranted.

The neocons’ implication is that having worked at times with Kurds in Syria to defeat the Islamic State of Iraq and the Levant (ISIS), we must now support or perhaps even guarantee their own security against the numerous warring parties that remain, especially government forces led by Bashar al-Assad and neighboring Turkey, which hates both Assad and the Kurds.

This is a half-clever way to achieve the neocons’ long-held goal of not merely defeating ISIS, but also getting America into the Syrian Civil War. Ultimately, they would like to conduct regime change against Assad and install a liberal democracy, despite failures to do so in Iraq, Libya, and Afghanistan. We potentially would be in simultaneous conflict with Assad, the Turks, non-Kurdish Iraqis, Iran, and Russia—not to mention miscellaneous jihadists for whom we would be foreign enemy number one. To assure the security of the Kurds, we would in effect have to help establish another de facto Kurdish state like the one we helped create in northern Iraq. The two landlocked entities would touch and could be the basis of an independent Kurdish homeland.

Students of history may conclude that the Kurds deserve exactly that. But such a U.S. dependency was never part of President Trump’s strategy in Syria or the broader Middle East. Even just supporting the Kurds in Syria, much less fighting for them for the indefinite future, has never been put to the American people. I highly doubt it was ever presented clearly to Trump, and there has been no formal or informal consent to the idea from Congress.

If any of our generals or covert operatives made promises to the Kurds, they did so without authority from the commander in chief. Nor did they place a treaty of alliance before the Senate, which is empowered by the Constitution to judge any treaty for good reason: the costs and consequences can be massive. Just ask those who have grappled with the legacy of Sykes and Picot.

Sadly for the neoconservatives, the Kurds themselves aren’t playing along with doomsday predictions. They recently announced a desire for talks and mutual defense with Assad, especially against Turkey. This reportedly angered U.S. military planners who had been talking up the Kurds. But it makes a lot of sense. Assad is evil, but he has been willing to allow some latitude to ethnic and religious minorities in Syria, including Christians. It is also presumably easier to negotiate with him when heavily armed, as the Kurds are. Furthermore, he has nearly won the Syrian Civil War having clawed back the most important parts of the country, and his lamentable government is lamentably durable.

It’s also important to remember that before Syria’s Kurds were the darlings of neoconservatives and other advocates of forever war, that position was held by the Free Syrian Army (FSA) fighting Assad. One of that army’s key boosters was the late Senator John McCain, who visited it on multiple occasions, one time even being photographed with terrorist kidnappers Mohamed Nour and Abu Ibrahim who happened to be members of the army. McCain’s office said that “None of the individuals the senator planned to meet with was named Mohamad Nour or Abu Ibrahim.” A spokesperson also said, “If the individual photographed with Senator McCain is in fact Mohamed Nour, that is regrettable. But it would be ludicrous to suggest that the senator in any way condones the kidnapping of Lebanese Shia pilgrims or has any communication with those responsible.”

Trump wisely ended U.S. support for the FSA. The lesson is that our ability truly to understand the forces at work in Syrian Civil War, and, more importantly, to manage its outcome, is extremely limited. The war there is lurching toward a conclusion which, while far from good, might at least end the killing that has snuffed out hundreds of thousands of lives and sparked a massive refugee exodus.

Amid this, President Trump is right to refuse to commit U.S. forces to new missions in Syria, which almost certainly would lack the support of the American people and again have Americans dying for other people’s struggles—and distracted from threats like China that genuinely put us at risk.

Christian Whiton was a State Department deputy special envoy from 2003 to 2009. He serves as a senior fellow at the Center for the National Interest and the author of Smart Power: Between Diplomacy and War.​