We Still Don't Know How Trump's Administration Will Handle Ukraine 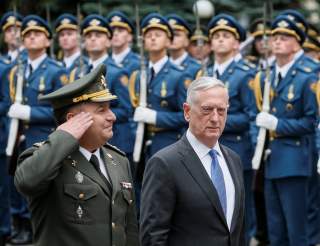 Last December, in these very pages, I warned that a particular danger the new Trump administration would face in the national security field would be the problem of senior figures issuing “contradictory statements” about U.S. policy, especially in the absence of “effective direction” from the White House. This would lead to uncertainty both within the U.S. government as well as in the capitals of other nations about American intentions—with potentially destabilizing consequences. Unfortunately, over the last several months, we have seen these worries become self-fulfilling prophecies.

Secretary of Defense James Mattis’s visit to Ukraine is the latest example to add to the list. In his public comments, Mattis reiterated the generic language that the United States “stands with Ukraine” and “supports” Ukraine’s territorial integrity. But, like Secretary of State Rex Tillerson during his visit to Kiev earlier this year, Mattis did not provide additional specifics. For those who were expecting Mattis’s visit to mark the definitive statement of what a Trump administration policy will consist of, and how it will differ from the assessments which guided the stance of the Obama administration, his public comments in Kiev provided no answers—and may have further muddied the waters.

Let’s review the state of play. By 2016, the Obama administration had settled in to a particular policy pathway on Ukraine: the United States would not recognize the annexation of Crimea by Russia or the legitimacy of any separatist entities in the Donbass, but would not actively force any sort of reversal. Instead, the United States seemed on track to view the status of Crimea the same way Washington treated the Baltic states under Soviet occupation or the Turkish Republic of Northern Cyprus: not providing any de jure recognition, but not doing much to change the state of affairs. The United States would concentrate on using business sanctions and financial pressure to raise the costs for Russia, in the hopes that economic pain would get the Kremlin to reconsider its actions—but would leave the heavy diplomatic lifting on behalf of the Western alliance to Germany and France. Finally, the Obama administration committed to assisting Ukraine in its political and economic reforms, and to providing nonlethal assistance, intelligence support and training for the Ukrainian military—but stopped short of supplying U.S. weaponry, especially Javelin antitank missiles, based on the assessment that Russia, in the observation of my colleague Olga Oliker, enjoyed the benefits of “escalation dominance.”

Congress has never been satisfied with this approach, and members of the Trump national-security team have dissented from it as well. Perhaps the United States should take more active steps to reverse Russia’s fait accompli on the ground in Crimea—maybe not to the level of what was done to reverse Iraq’s annexation of Kuwait in 1991, but also not accepting that U.S. maps will carry a disclaimer for the next forty years indicating that the United States does not recognize the incorporation of Crimea into the Russian Federation. Tillerson appointed Kurt Volker as his “special representative” for Ukraine negotiations, signaling that Washington would become more active alongside the Germans and the French in the search for diplomatic solutions.

Congress moved to strengthen sanctions on Russia and limit the president’s freedom to lift them, but a critical component of that legislation—the imposition of third-party sanctions on countries that assist Russia in constructing alternate pipelines like Nord Stream 2 and Turkish Stream, which are designed to bypass Ukraine—can only occur if President Trump chooses to levy them. Earlier legislation passed a decade ago also commits the U.S. government to assist Ukraine towards the goal of eventual membership in the North Atlantic Treaty Organization, but for much of the last ten years, ever since the 2008 NATO summit in Bucharest, the United States has acted as though that is a very long-term objective, and has not done much to advance the process. Most critically, a process has been underway to review the question of whether the United States should provide “lethal” equipment to the Ukrainian armed forces.

But Mattis could provide no definitive answers, at least in public, to the questions about what is likely to change. Will the United States supply arms? Still under review. What steps might the United States take, beyond strengthening sanctions, if Russian-backed separatists renew their campaigns? Not clear. A timetable for a membership action plan for Ukraine to join NATO? Not yet provided. Stronger U.S. action to pressure European partners to block the new pipelines? Apparently not on the table. Mattis, like Tillerson and UN ambassador Nikki Haley, has provided a sense of his personal opinion and what he might recommend, although in Kiev, he declined to discuss with reporters what his final recommendations on the arms question would be. But it is also apparent that, at present, these figures do not definitively speak for the president himself—nor can they commit the United States to a course of action that Trump himself has not yet signed off on.

This creates two problems moving forward. The first is that a gap will open up between America’s rhetoric of support for Ukraine and what Washington is prepared to do, but that Petro Poroshenko’s administration will not detect or understand this gap. We saw the results of such a gap nine years ago in Georgia, when Mikheil Saakashvili interpreted statements similar those Mattis and Tillerson have made on their visits as reflecting promises of concrete aid—which never materialized once the Russian incursion into Georgia began in August 2008.

The second is that Trump will not actively veto the recommendations of the Tillerson-Mattis policy review on Ukraine, but won’t be particularly enthusiastic or energetic in carrying out its provisions. The continuation of mixed messages emanating from Washington about the Ukraine conflict would then only serve to confuse not only Moscow and Kiev, but the European allies, and increase the chance of a undesired escalation.

I had hoped that the Mattis visit would finally provide clarity on American policy. Instead, I now have more questions than answers.

Nikolas K. Gvosdev is a contributing editor to the National Interest and senior fellow at Foreign Policy Research Institute. The views reflected here are the author’s own.