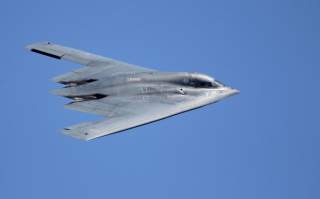 Why does the United States have a nuclear arsenal, and what is it supposed to do?

That’s actually a complicated question, especially in the 21st century. Even during the Cold War, there were strong divisions among American strategists about the purpose of nuclear weapons. For some, they existed only to deter nuclear attacks on the United States; for others, they were the military equalizer between an outgunned West and a gigantic Communist alliance. How did we get the nuclear deterrent we have, and where should we go from here?

The U.S. nuclear force today is the cumulative result of a number of decisions made over 70 years. At the dawn of the Cold War, bombers were the backbone of the American nuclear deterrent, since there was no other way to deliver a weapon over long distances. The Soviets also developed long-range bombers, but they were considerably inferior to their U.S. counterparts, and had to traverse two oceans before reaching North America.

At first, the United States tried to use its nuclear advantage to contain Soviet expansion by threatening to use nuclear force in response to almost any Soviet aggression anywhere. This was the Eisenhower-era policy of “Massive Retaliation,” but this was a less a strategy than a sign of desperation. There was no way for the U.S. and its allies to confront the massive conventional superiority of the Soviet Union (and, for a time, its huge Chinese communist ally) in Europe or Asia with conventional force. Outgunned and outmanned, the Americans threatened to respond “at times and in places of its own choosing” with nuclear arms, but Washington never made clear what would trip this nuclear trigger, and in the end, Massive Retaliation, while an early attempt to induce uncertainty in the enemy, was a hollow threat once the Soviets could respond in kind.

From the 1950s to the 1960s, the United States and the Soviet Union both diversified their strategic forces. Both sides soon developed long-range missiles, but the earliest versions were in perhaps the worst possible configuration: huge warheads on top of relatively inaccurate missiles sitting outside on launch pads. These bombers and missiles out in the open were sitting ducks, which made them a strong and destabilizing temptation for an enemy first strike.

In the 1960s, the superpowers started burying their missiles in the ground and hiding them underwater. Survivability was the key to stability: if neither side could be assured of neutralizing the other with a sudden attack, neither would risk suicide. This created the condition American strategists called “mutual assured destruction,” a phrase they chose in part because of the evocative acronym it created. The United States spread its ICBMs out over vast spaces in the American West, but the Americans took advantage of their maritime prowess to create a powerful sea-going deterrent as well (as did the Soviets, but in smaller numbers). These changes meant that both sides soon had a “secure second-strike capability,” or the guaranteed ability to strike back after being hit first.

By 1967 the U.S. arsenal hit a peak of some 32,000 weapons, from small bombs to blockbusters. This array of forces reflected the war that U.S. leaders and strategists expected to fight. During the Cold War, the United States and its NATO allies assumed, sensibly, that no matter what started an East-West confrontation, the conflict would migrate to the inter-German border, the “Central Front,” in Europe. The Soviets, the reasoning went, would have every incentive to shift any conflict away from areas where they were weaker or less capable (such as Asia or the Middle East) and take it to the area where they enjoyed huge conventional superiority.

Once war was underway in Europe, NATO would be forced to surrender whatever was at issue to get the Soviets to release their grip on Western Europe. Nuclear weapons provided the West with its only chance of stopping such an attack. Small, short-range weapons (“tactical” nuclear arms) would be fired from everything ranging from bazookas to artillery, destroying the advancing Soviet tank armies and halting the invasion in its tracks. The goal was to convince the Soviet Union that nothing could be gained from aggression, since every scenario would lead back to a major nuclear exchange.

But did the Americans really intend to use nuclear arms, or were they trying to deter the Soviets from using nuclear force against the U.S. and NATO? The U.S. answer was to build a nuclear force configured for both deterrence and nuclear war-fighting. In fact, by the late 1960s, the American position was something of a paradox: the only way to convince the USSR that we wanted no part of a nuclear war was to have a logical plan for fighting one, and to maintain a credible force that could execute that plan. The U.S. triad thus shifted somewhat from a rationale of survivability and toward increasing options for nuclear use in a variety of scenarios ranging from limited strikes to all-out war. That force, and its multiple options, remains largely in place today.

Today, the Cold War – or at least the most recent Cold War – is over. What does the U.S. strategic deterrent look like today, and what purpose should it serve in our national security?

First, it’s important to note that the dilemma of Massive Retaliation persists, in a way, to this day. What can the U.S. nuclear force, designed for World War III, do against a smaller nation that might be considering the use of, say, chemical weapons, or a single tactical bomb in a regional confrontation? Is the United States actually ready to employ nuclear strikes across North Korea or Iran?

Second, although the U.S. force is much smaller than it was during the Cold War (with, for example, only 450 land-based silos instead of 1000), it is still configured for a major nuclear conflict with a peer competitor. By treaty with the Russians, we can only have 700 launchers – that is, any mix of submarine or land-based missiles, along with bombers – and they can only carry a total of 1550 warheads. How should we arrange our forces within those limits?

The United States has conducted three reviews of its nuclear forces – in 1994, 2002, and 2010 – and each time concluded that it needs to retain the triad. But does America still need long-range bombers? Should it get rid of the land-based ICBMs, and move most of its missiles underwater, as some have argued? How many submarines, and with how many weapons on each, do we need? Does NATO still need tactical nuclear weapons, now that the Atlantic Alliance is the conventionally superior power and Russia is the inferior regional power?

Today, the U.S. nuclear deterrent is facing hard choices about modernization. The Air Force and Navy are drawing up plans for new bombers and a new generation of submarines. The American tactical arsenal will be modernized, at great cost. In effect, the result will be a smaller version of our Cold War nuclear deterrent, an idea that would have been harder to sell until the reemergence of Russia as a severe threat to U.S. security. But with the costs projected to reach into the hundreds of billions of dollars, it’s time to ask if our previous strategies and nuclear force structure make sense.

The next administration will have to do its own review of U.S. nuclear posture when it comes into office after 2017. Will it start from the ground up, or will it merely ratify decisions made in the 1960s and the 1970s? There’s no rule that says that previous answers are the wrong answers, but every planner knows that there’s always an insidious and difficult enemy when drawing up future forces: bureaucratic inertia.

Tom Nichols is Professor of National Security Affairs at the Naval War College and an adjunct at the Harvard Extension School. His most recent book is No Use: Nuclear Weapons and U.S. National Security (University of Pennsylvania, 2014) You can follow him on Twitter:@RadioFreeTom.

Dana Struckman (Colonel, USAF, ret) is Associate Professor of National Security Affairs at the Naval War College. On active duty, he was a missileer and also worked in ICBM testing and acquisition.  Additionally, he commanded a U.S. ICBM missile squadron at Minot AFB, North Dakota. The views expressed solely those of the authors.