Welcome to the Showdown Over South Korea's Seoul 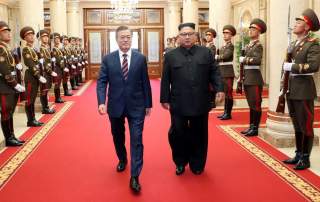 Fateful Alliances of the Past

When the Chinese troops crossed the Yalu River into Korea and dramatically altered the fortunes on the battlefield—repelling their foes southward and confining them largely to the southern half of the peninsula—not a single decisionmaker in Beijing could have predicted the vicissitudes of national fortune to befall all the combatant nations and the consequent collapse of their own state a mere half century later. It was early 1593.

The Imjin Waeran of 1592–98, commonly referred to in English as “Hideoyoshi’s invasions,” is the most spectacular manifestation of Korea-China-Japan triangular tensions in history. The Japanese warlord’s ambition of conquering Ming China first called for an invasion of Joseon Korea, the natural pathway for advancing into the Celestial Empire. The conquest of Korea was achieved handily, but the unexpected Chinese intervention and subsequent reinforcement of troops by both sides vastly complicated Japan’s campaign. In 1598, after years of feral fighting and drawn out peace negotiations, the Japanese troops withdrew. The war ended in an unsatisfactory draw; sans surrender, sans indemnity, sans ceded territory, sans victory parades, and Korea devastated.

A Sino-Korean “alliance” forged in blood was born. Yet, it died a mere thirty years later in the wake of two devastating Manchu invasions of Korea, the first in 1627 and the second in 1636. Joseon, caught between a declining Ming, to which it owed allegiance and a major debt, and a rising semi-nomadic power in Manchuria that Confucian Korea regarded as barbarian, chose to side with the fading Ming while alienating the ascendant Manchus, the would-be founder of Qing China. The result of Korea’s “misreading” of the strategic environment was the two punitive Manchu invasions and thereafter a protracted period of decline, even as the dynasty endured for more than three hundred years. The Korean monarchy closed itself off from most foreign intercourse except for that with the Qing dynasty and intermittent contact with the isolationist Tokugawa Japan.

Like Tokugawa Japan, Korea became self-contained, choosing to remain indifferent to the sea and the world beyond the Pacific. But unlike Japan, Korea would pay a dear price for its solipsistic national policy once it was pulled into an entirely new world order in the mid-nineteenth century, marked by gunboat diplomacy, unequal treaties, and a life-and-death race for colonies. Unable to adjust to the radically new environment and unable to secure any ally, Joseon Korea, abandoned by all, fell to Japanese control in 1905 and colonial rule five years later. The humiliating historical memory of state collapse, colonization, and Japanese atrocities still cloud the U.S.-South Korea-Japan quasi-alliance today.

Alliance in War and Peace

When the Chinese troops crossed the Yalu River into North Korea in 1950, few, if any, decisionmakers in Beijing could have foreseen with certainty the vicissitudes of national fortune to befall the major combatants—in particular, that the war would presage the vastly enhanced stature of the People’s Republic of China, not quite one year old at the time, from a backward agrarian revolutionary state to the world’s third most powerful state. That the nascent PRC had fought the United States, the preeminent military power in the world, to a draw would transform Beijing’s stature in the eyes of the region, the Third World, and, pointedly, the United States. Despite the enormous casualties, China, by proving its mettle in war, had resurrected itself as a major world power.

And so had the Democratic People’s Republic of Korea, unbeknownst to Americans at the time, resurrected itself from the brink of state collapse to become in due course a major regional player. North Korean leader Kim Il-sung, even in failing to achieve his ultimate goal—liberate the South and unify the peninsula under his rule—profoundly “revised” the geostrategic importance of the Korean Peninsula from a minor, forgotten outpost on the tip of the Asian mainland to a major powder keg on a key strategic strip of land in Northeast Asia. For the next forty years, generous aid poured into Pyongyang from China and the Soviet Union in seeming competition, in spite of, or because of, Kim Il-sung’s aggressive purges of pro-Soviet and pro-Chinese officials in the 1950s and limited-but-lethal provocations against South Korean and the U.S. troops in the South in the 1960s. The more “unhinged” Kim acted, threatening war and killing South Korean and U.S. troops in premeditated lethal attacks, the more prone were his patron states to placate him with bigger blandishments.

It was in this new peninsular environment of the wholly dependent client state, by virtue of threatening to entrap the bigger patron state in a new or prolonged war, that the United States-Republic of Korea alliance was born. Without doubt, had it not been for South Korean President Syngman Rhee’s “strategic” antics during the Korean War, for example, threatening to withdraw from the UN Command and resume hostilities on his own once a ceasefire was reached, and backing up his intention to prolong the war by unilaterally releasing in June 1953, a month before the armistice was reached and much to the ire of the Chinese, Chinese and North Korean prisoners of war who opposed being sent home, the Eisenhower administration would not have agreed to a mutual security pact that so one-sidedly favored the ROK.

In effect, the much-touted U.S.-ROK alliance, the single greatest factor in the preservation of the de facto peninsular peace since the Korean War armistice of July 27, 1953, was the product of what may be characterized as “Pyongyang-style” diplomacy—the client state yanking the patron state around. In varying degrees, Kim Il-sung, Syngman Rhee, and Mao Zedong all benefited from the devastating war; that is, the exigencies of war and the new entangling alliances that ensued once the ceasefire took effect.

The 1953 U.S.-ROK alliance has enabled the “long peace” in Korea over the past sixty-five years and South Korea’s impressive economic development. At the same time, the alliance has gone through some rough periods of “adjustment.” For example, there was the unexpected notification by Richard Nixon to Park Chung Hee in May 1970 of his decision to withdraw twenty thousand U.S. troops from South Korea, in spite of having reassured Park in person in San Francisco in August 1969 that he “rejected” such an “idea.” Also, there were the seething tensions between “anti-American and probably a little crazy” Roh Moo-hyun and George W. Bush on North Korea policy and, in particular, the timetable for transfer of wartime operational control (OPCON) of American and South Korean forces from the United States to the ROK. Today there are the increasingly diverging views between Seoul and Washington on the nature of the North Korea threat. While Seoul sees the DPRK as fundamentally reactive and, thereby, unthreatening entity, the U.S. views it as a fundamentally revisionist and, thereby, threatening state.

Further complicating matters is Donald Trump’s propensity to suspend preemptively series of combined military exercises with the ROK in an attempt to induce North Korea’s denuclearization, President Trump’s occasional threat to remove U.S. troops from both South Korea and Japan in order to compel these allies to increase financial support for the costs of stationing U.S. forces in their respective countries, and President Moon Jae-in’s impulse to return to the kind of sanctions-busting, massive inter-Korean economic projects that were the hallmark of Seoul’s North Korea policy under Moon’s former boss, President Roh Moo-hyun, when the Roh administration gave the Kim Jong-il regime $4.4 billion from 2003 to 2008.

Such convoluted peninsular dynamics prompt some thorny existential questions: In view of South Korea’s economic, political, and soft power and, all the more, the dramatic inter-Korean rapprochement in 2018, is the U.S.-ROK alliance approaching the end of its utility? While no responsible official would raise such a question in public, what is the raison d’etre of the alliance in this brave new world of inter-Korean rapprochement and growing perception gap on the nature of the North Korean state?

For example, is it time for an “end-of-war declaration,” as the two Koreas profess, even though such a declaration would likely spell the dismantlement of the UN Command? Is it finally time for the relevant parties to negotiate a peace treaty or “a permanent peace regime on the Korean peninsula,” as the September 19, 2005, Joint Statement of the Six-Party Talks and the February 13, 2007, Joint Statement of the Six-Party Talks call for? Would a peace treaty between the United States and the DPRK not create a crescendo of calls for the complete, verifiable, irreversible dismantlement of the Combined Forces Command, withdrawal of U.S. troops from the South, and perhaps even the abrogation of the U.S.-ROK alliance?

Alliances, like marriages, cannot be assumed to last forever. On the present heady course of inter-Korean “rapprochement,” with Seoul pledging to resume large-scale subvention schemes couched as “inter-Korean cooperation” in violation of UN Security Council and U.S. sanctions, the United States can either accept South Korea’s compromising actions or keep a distance from its ally. The Moon administration’s insistence on brokering an end-of-war/peace declaration followed by peace treaty between Pyongyang and Washington threatens both the legal and political rationale for the U.S.-ROK alliance. The question that Washington must raise with Seoul is, “Is this an acceptable risk for the ROK?”