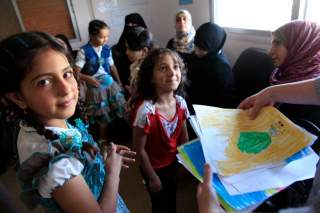 It is afternoon recess at school. Children are chatting away in Arabic and Assyrian, a language spoken by the Middle Eastern Assyrian Christian minority, congregating around games and drawing pictures. But their snack gives away that there’s something unusual about this school: the children are having Scandinavian-style open-faced cheese sandwiches, not Middle Eastern food. Elafskolan is, in fact, the world’s first Assyrian-language school outside the Arab world. Its location is Södertälje, a Stockholm suburb that has turned into a haven not just for these seventy-six children who’ve fled violence in Syria and Iraq but for thousands of other Middle Eastern Christians as well.

“We’re getting a lot of new arrivals,” reports Helmut Lavicka, headmaster of the seven-month-old school. “In addition to speaking Arabic and Assyrian, they quickly pick up Swedish as well. It’s amazing that they do so well, considering the trauma they’ve experienced and the fact that many of them haven’t attended school in years.”

That’s because they’ve only just arrived in Sweden. Ever since the first Assyrian families from Iraq, Syria and Turkey—arrived in Södertälje in the 1960s, this rather nondescript suburb some forty minutes by commuter train from central Stockholm has been a Middle Eastern hub in the chilly North. Back then, they settled in Södertälje not because it reminded them of anything from home but because it offered jobs: good factory jobs with Scania, the truck manufacturer. Those original immigrants, escaping persecution that seems mild in comparison with the fate that is currently befalling Christians in the Middle East, now lead established middle-class lives; Swedish success stories though they lovingly preserve their ethnic heritage. At the city’s outskirts, the many elegant villas owned by those original Middle Eastern arrivals bespeak their industriousness. And these days, they find themselves welcoming a never-ending stream of brothers and sisters from the homeland of Christianity. Since the beginning of the Iraq war, the number of Middle Eastern refugees making their way here has skyrocketed. According to municipal statistics, 10,002 of Södertälje’s residents now have Iraqi background, 2,505 are Lebanese, and 7,632 Syrian. There are also 5,393 Turks. Although Swedish law bans registering refugees’ religion, unofficial estimates show that the vast majority are Christians of different persuasions.

Thanks to Sweden’s pioneering decision to grant Syrians permanent residence in Sweden last year, Södertälje’s Syrian community has grown even faster. Last year, 30,583 Syrians applied for asylum in Sweden, an 87 percent increase from the year before. That accounted for more than half of all Syrian asylum applications to European Union countries. “Middle Eastern politics is a matter of kitchen-table conversations in this city,” notes Mayor Boel Godner. “When it comes to Middle Eastern Christians, we’re in a league of our own. So when Islamic State started growing, it immediately became a Södertälje issue.” Some 1,200 new refugees have already arrived this year, 90 percent of them Syrians. Indeed, Södertälje has lately become a mirror image of the ethnic demographics of the Middle East, that region’s persecuted minorities finding refuge in Sweden. According to the Pew Research Center, Christians made up 5 percent of the Middle East’s population in 2010, down from 10 percent in 1900, and that was before the arrival of Islamic State. Iraqi Christians, who once numbered several millions, have now dwindled to less than 400,000, and Iraq’s Patriarch now warns of impending disaster. And in Syria, the U.S. State Department notes that Islamic State has carried out mass killings of Christians and other minorities. As the recent gruesome beheadings of Christian Egyptian migrant workers in Libya showed, not even Copts, a relatively safe community in a country where they make up 10 percent of the population, are secure anymore. The Islamic State is even holding two Middle Eastern bishops hostage.

Since he arrived in Södertälje twenty-five years ago, Archbishop Julius Shabo of the Assyrian Orthodox Church has seen his Swedish flock quadruple. “The majority of people who’ve come here for the past three years have been from Syria and before that from Iraq,” he tells me during a meeting in his office, located above the Assyrians’ imposing cathedral here. “Middle Eastern people like being close to their families and relatives, so that’s why they come to Södertälje.” Swedish law aids the collective voyage to Södertälje by allowing new refugees to settle wherever they like as long as they can show that they have a place to stay. That place, naturally, is mostly with friends and family, even though it means moving into homes that are already crowded. Those unable or unwilling to make private arrangements are divided up between municipalities willing to take them, with each respective municipality responsible for their housing and welfare.

Receiving so many new members has left Bishop Julius, himself a Syrian, with feelings of both joy and grief. “The saddest thing is that we’re welcoming them from death,” he explains. “People are leaving their homes not because they love this cold country but because they’re afraid of being killed.” That fear brought Shamoun Zitou and his family, Orthodox Assyrians from Aleppo, here. Aleppo is both Syria’s largest city and home to its largest Christian community. “I just have to assume that things will get worse in Syria; otherwise I’ll be disappointed,” he says of his realization that his children will grow up in Sweden. “No matter how much my wife and I tell them about it, they’ll forget Syria. They’ve already forgotten which city they’re from.” Zitou reflects that in Aleppo, his children were half-Arab and half-Assyrian: two rather similar cultures. Sweden, by contrast, is very different. “If they grow up to feel half-Assyrian in addition to half-Swedish, I’ll feel that we’ve succeeded,” he concludes.

That’s a big “if.” Södertälje now has so many immigrants that several municipal schools boast only a handful of Swedish pupils. In a multicultural society, that ethnic distribution would not pose a problem but for the fact that without Swedish classmates, new arrivals have nobody from whom to learn Swedish. Swedish classes, offered to adults as well, are hardly an equivalent source of knowledge. As a result, both the young immigrants and their parents are facing life as perpetual outsiders in this haven of security. “If I want to meet Swedes, I have to leave Södertälje,” acknowledges Zitou. “Sweden is not Syria, so it’s not good that we’re a mini-Middle East here. We should live like Swedes. But it’s easier to be with people whose habits and way of life you know.”

At tables arranged café-style at the back of Saint Afrem’s Syriac Orthodox Church, an imposing building surrounded by snow, several dozen men are having coffee and chatting away. The church, which has ministered to Sweden’s Assyrians ever since those early Scania years, doubles as a community center, with new arrivals often making their first stop here. I meet a nineteen-year-old who fled Syria last year with his two older brothers, the eldest deserting from the army (because his parents are still in Syria, he asked not to be identified). “We sold our possessions, paid the smugglers and then walked and walked,” he reports. Now he attends high school here in Södertälje, planning to train as a plumber. Even so, he speaks only single words in Swedish. “Sweden has brought in too many refugees at the same time,” says Afram Yakoub, the young chairman of the Assyrian Federation of Sweden, who himself arrived here as a child. “It’s a tragedy for people to have fled from war and misery and be stuck as permanent outsiders here.”

At the municipal offices—virtually indistinguishable from local government facilities elsewhere in Europe but for the fact that they offer a host of lectures and presentations on current Middle Eastern politics—Boel Godner governs with social compassion befitting her social democratic ideology. Though energetic by temperament, she seems withdrawn when I come to see her, and it’s not hard to understand why. A national policy intended to make refugees’ experience more humane has created a stampede on her city, which—she argues—it can’t handle on its own. She wonders why wealthy Stockholm suburbs don’t volunteer to receive Syrians and Iraqis feeling for their lives. As far as Godner is concerned, this divided society serves no one. She has a point.

Many Swedish municipalities, including the wealthiest ones, receive only minimal numbers of refugees, knowing that Middle Eastern Christian refugees in particular will most likely find an abode in Södertälje, which is now 48 percent immigrant. That leaves this low-income municipality with a 15 percent unemployment rate among native-born Swedes, and a 27 percent unemployment rate among immigrants, with huge costs for everything from teachers to interpreters. Meanwhile, many Muslims, in turn, settle in the southern city of Malmö. “The most important thing is for the refugees to learn Swedish and to make sure they get a permanent place to live rather than moving around between the homes of friends and family as is currently the case,” Godner argues. “If the rest of the country doesn’t want to receive refugees, the rest of the country should at least help us help the refugees here in Södertälje.”